The Basics of Tweaking Guns for Different Situations 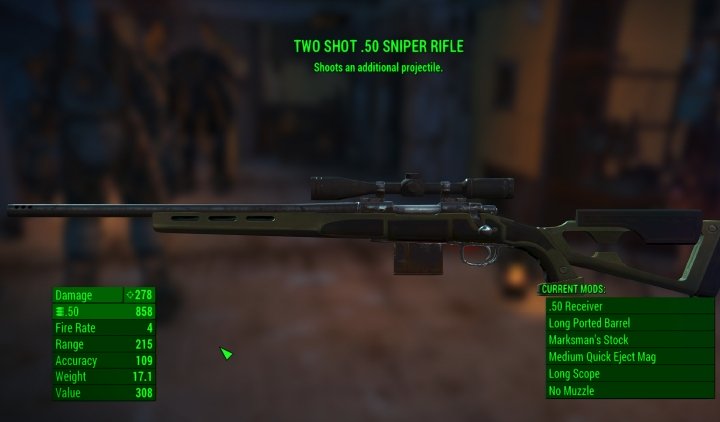 Weapon Mods allow hundreds of different weapons to be made in Fallout 4. This Sniper Rifle is quite powerful and has served my mid-level character very well.

Depending how far you are in the game, this guide may or may not be helpful to you. Players who do not yet own Fallout 4 and wonder how weapon mods work may find this enlightening and encouraging. Some players may wonder how to get a sniper rifle in Fallout 4, without realizing there is no 'sniper rifle'. The game generates names based on the mods on a weapon, and a sniper rifle is a hunting or combat rifle with a scope! 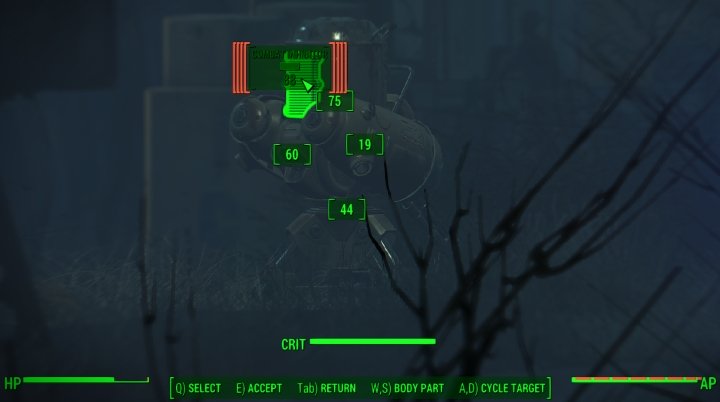 VATS AP and Weapon Mods
I've covered the weapons mods that affect AP usage in VATS for do-it-yourself-ers, but figured that some new or uninformed players might like to see a couple of examples of how to fine-tune weapons to you needs. Let's look at two hunting rifles. One turned into a sniper rifle, the other retaining its original name albeit with a very different personality. I'll explain the changes that drastically alter the weapon as I go, and hopefully you'll learn enough to do what you want with your weapons and get more mileage out of them while also learning something useful.

Test Character Stats
The Character I'm testing the weapons below with has been set to exactly 150 AP for easier math, I can't tell the exact AP cost and must estimate. He has one point in Rifleman (+20% damage), so his damage values are higher than you might see right away. With more ranks in Rifleman, the damage stated for his rifles would far exceed these values even without advanced mods from Gun Nut. This is good to know: weapon damage values do take your Perks and other bonuses into account when they're showing you stats, and the weapon's values with mods get boosted by the +% you have from weapon specialization Perks. If a pistol were to gain +10 damage from a weapon mod and I have 3 ranks in Gunslinger, I'd instead see it rise by 16 when selecting the mod.

You can easily test AP cost in town, so long as you have at least a turret set up. Target it in VATS and it will give you an accurate representation of what your AP cost will be during live combat. While exact numbers aren't revealed, you can do some estimation with math by dividing the amount of AP you have by the number of shots it allows you to take. Be sure to take your clip size into account. Reloading during combat takes AP without Perks. Thankfully, you can give weapons a larger magazine without Gun Nut for the most part, they'll just be slower to reload without higher ranks. 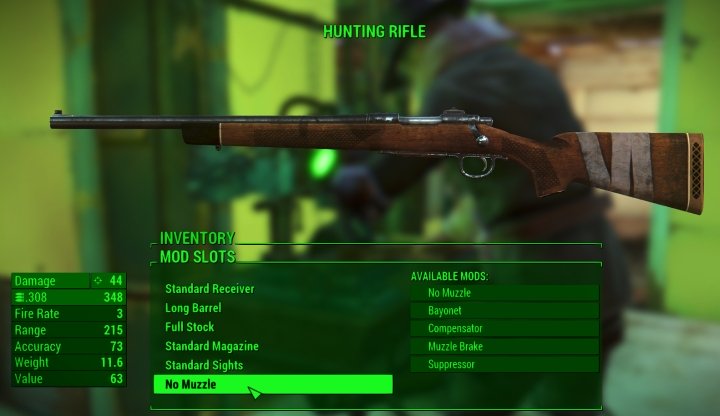 Looking for a Sniper Rifle in Fallout 4? You probably already have one. Hunting Rifles turn into great Sniper Rifles with weapon crafting.

Hunting Rifle
Hunting Rifles make the best ballistic Sniper Rifles because they can be modified to use .50 caliber rounds with higher ranks of Gun Nut - they're better than Combat Rifles for this role because of this, though both can become 'sniper' rifles, the other will be a 'Combat Sniper Rifle'. The base weapon is pictured above, with pretty much standard mods you'd expect on a hunting rifle, only with a full stock which is not the 'standard'. I'll start with 2 of these that are exactly the same, and show how radically different they can be based upon the mods I use.

Weapon A: Pure High-Damage/Range Sniper Rifle
Let's look at this scenario first where you'll ignore VATS, as it'll fit the mold of what most people would consider a Sniper rifle to be and demonstrate what many players did early in their gameplay by focusing on damage and accuracy boosts.

To make it a strong combat-initiator for eliminating a tough enemy and (possibly with stealth) remaining undetected, I want high damage and extreme range, but I'm limiting myself to 1 Rank of Gun Nut for the comparison to do what a new player might be able to do. Based on what I learned in my VATS article, I will use: 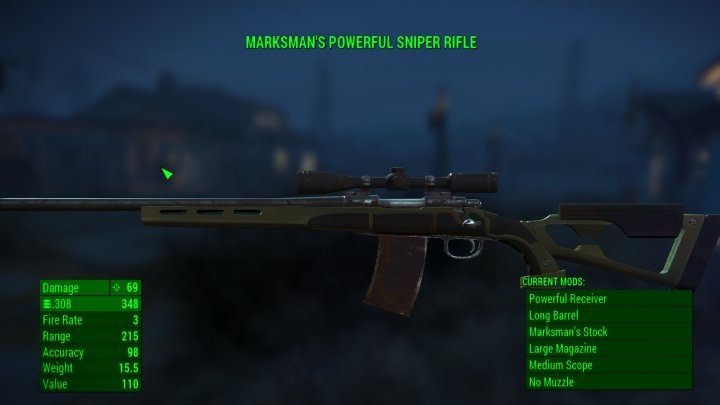 A basic Sniper Rifle that can be made with Rank 1 of Gun Nut. It is chosen for higher damage with little regard to AP usage, and may be better for a player not using VATS. That said, it is great for surprise headshots in VATS.

Weapon B: A Totally Different Weapon
I will not change everything about the weapon, but a few key changes make its damage, AP and usage radically different. 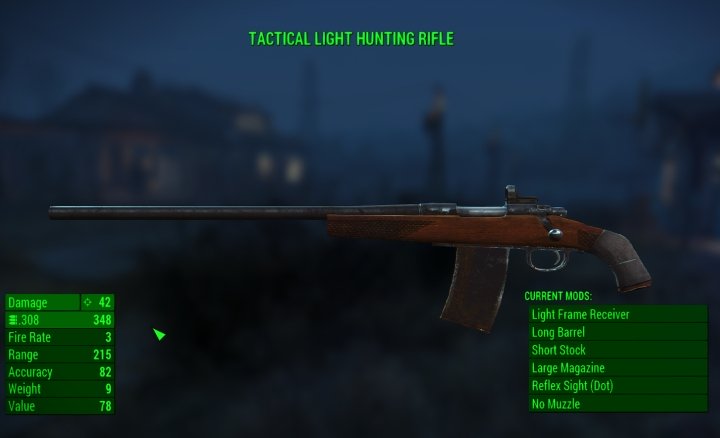 A Tactical Hunting rifle is better for mid-range situations because it uses much less AP in VATS, while dealing respectable damage and filling the critical meter faster than the above weapon.

While accuracy fell from 98 to 83, VATS cost fell to that of a 10mm pistol and sits at only 21. It has the same range, only a much better potential for damage in VATS. At a decent range, I saw a 10% reduction in chance to hit.

Comparison of Potential
So, the Power Sniper Rifle can hit 3x, dealing up to 207 damage with 3 shots and has about a 10% better chance to hit - it's going to do much better long range, regardless. With a clip large enough to unload them all, The Tactical Light Hunting Rifle can hit 7x44 = 308 damage. This is a huge difference in damage potential, although the Sniper Rifle will probably deal much, much larger Critical Hits. It is also worth keeping in mind that if you're going to do a sneak attack (with or without a crit), a slow, powerful weapon is much better than a fast low-AP weapon.

If we were solely using that high-AP cost weapon, it would take some time to fill the crit meter because the meter does not care about your fire rate. It is a static amount per hit, so the 2nd weapon can crit more often. The 2nd weapon is better for medium range situations, and for taking out multiple low-health enemies at once with accuracy. At medium ranges, it will be devastating. That's not to say that the first weapon doesn't have a place in the world, however. It is the superior weapon for sniping manually and aforementioned sneak attacks - VATS damage potential cannot speak at what you might accomplish at the weapon's maximum range, and you're sure to be stealthier because of the greater distance from the target(s). The 10 gap in accuracy is going to be more noticeable the further you are away from the target.

Jose Alvarado
I found this video on youTube and @ 6:25 he uses console commands... I think... to get AP#. May be useful to update this guide?
Admin:
Thank you! I will definitely have a look and try to use that for future weapons. What I was doing was cheating my AP down to figure it out for weapon guides. If I had only 25 ap and could fire it, it showed me. This was for a totally different page, but I do have a lot more knowledge since I originally made this page and will try to spruce it up a bit.

6
budguinn
I haven't played previous fallout games so this was totally new to me. I'm currently holding off using my perks and waiting for the new automatron DLC to come out. I'm thinking they may require new perks, so I'd like to be ready. My question?...do I keep all of my current perks and levels with the new DLC. Also, how many 'perks' can I save without using? I play on Xbox 1..no cheats and am at level 150.
Admin:
I'm coming a bit late to be helpful to you but in case anyone else asks and finds this: You can save as many as you want. The DLC doesn't affect perks that much, just some extra usage of Rank 1 Robotics Expert and possible use of Inspirational if you want to buff the companions.

Overall Bethesda should not be breaking save files with DLC. Many of us have high level characters and that'd really disappoint us. With the new survival mode, you DO need a new character but DLC should always tack on content that will affect gameplay but not your save files :)

3
Diego
why not go all the way with the vats hunting rifle and go smallest quick magazine, longest light barrel and strongest calibrated receiver? i mean, that's how you REALLY get a beast vats gun out of the hunting rifle, in fact i think it's probably the best base vats gun in the game, other than maybe the sawed off calibrated short stock double barrel. those two weapons are redonkulous, you just have to have really high perception. i'd recommend starting at 10, using drugs to lower perception through withdrawl to under 10 to get the special book so that it goes back up to 11, then get the bobblehead at the museum. then you can crank up perception with clothes and glasses, etc and use that beast "mid range" hunting rifle at stupid long ranges accurately.btw i think that lucky doesn't stack with calibrated ( or maybe it was the plasma/laser receiver that does 4x crits) so if you have that you should just go for the strongest receiver and relentless/vats enhanced. with vats enhanced you could probably get away with putting a scope on there and getting even MORE accuracy out of it. insane for the shotgun in vats.

3
mystico
dude, your articles are so informing and well explained. thank you so much!