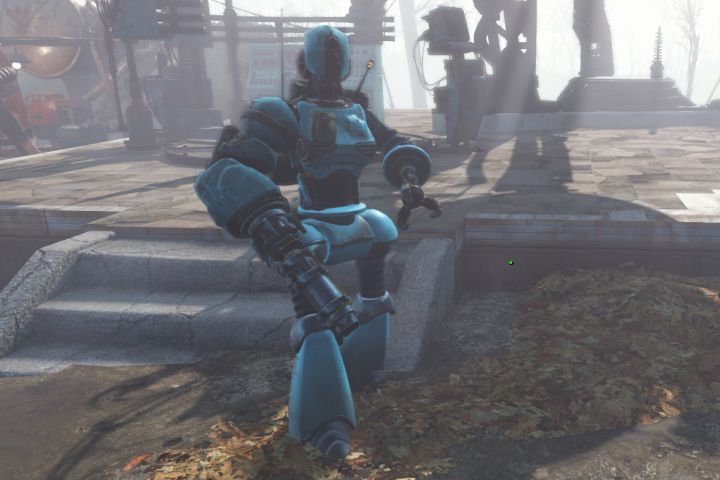 Ava equipped with the radar beacon, it's time to go headhunting and get some great loot!

Headhunting is the third quest in Fallout 4's Automatron DLC. In this quest, you will track down two more radar beacons to help locate the Mechanist. Additionally, you will learn of the new Faction in Automatron - the Rust Devils. A group of raiders who possess technology - great!

With the Mechanist Device (Radar Beacon) installed on Ada, you're able to track down the second Robobrain's location. You need a total of three for Ava to be able to pinpoint the Mechanist's location. You may be sent to the same area as I was (northwest of Hangman's Alley) or to a different location for this second beacon. Let me know if you are sent elsewhere using the contact form above! 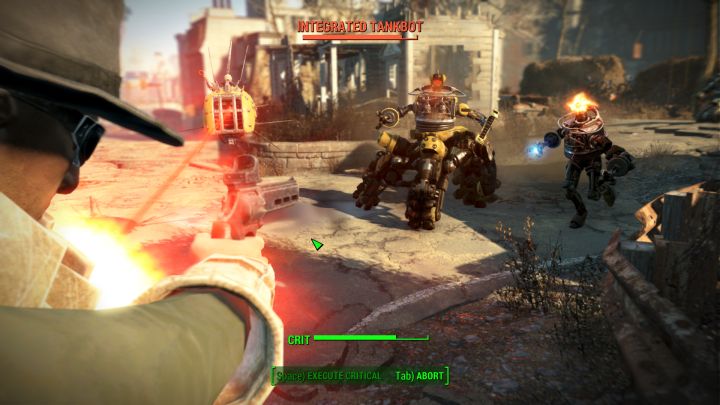 The first battle is just a warm-up.

In this fight, I faced an eyebot, two Robobrains, along with two regular bots that had Assaultron heads and could fire that dangerous beam. Lacking Robotics Expert, targeting limbs worked perfectly, though I avoided breaking any robot's two weapons in order to prevent any self-destructs. Their legs seem as vulnerable as other parts so you can knock out a weapon then slow them down using VATS.

After completing the quest, Ava will inform you the location of the third Robobrain - at Fort Hagen Satellite Array in the hands of a new faction known as the Rust Devils. Think Raiders who are competent with robotics, meaning they can be a nasty bunch especially given their robot escorts.

The Third Radar Beacon and the Rust Devil Faction

If the first fight seemed a challenge, the second is even more so. The Rust Devils are quite well-fortified and have outside defenses including turrets, a few robots, and Rust Devils themselves. I found several pieces of the new Robot Armor set here, along with an Assaultron helmet. It's clear bumping into this faction will lead to finding great items, given they drop the robot set themselves and they are accompanied by bots that will give new parts for the Robot Workbench. 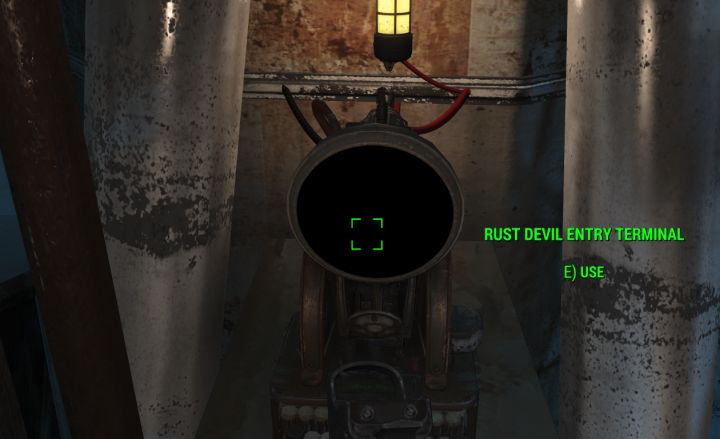 Hack the terminal up top to get inside

You must climb to the top and use the terminal in order to enter the facility to get to the Robobrain. Thankfully it's a safe height to drop from. Entering the facility, any robot explosions are going to be more dangerous in the close quarters. The Rust Devils are technologically adept, so they've got laser trip wires set up (and connected to assaultron beams!) that you must look out for to proceed safely. In a way the high tech route is less effective, given I've been blown to bits by a shotgun on a trip wire. The lasers are easy to spot. 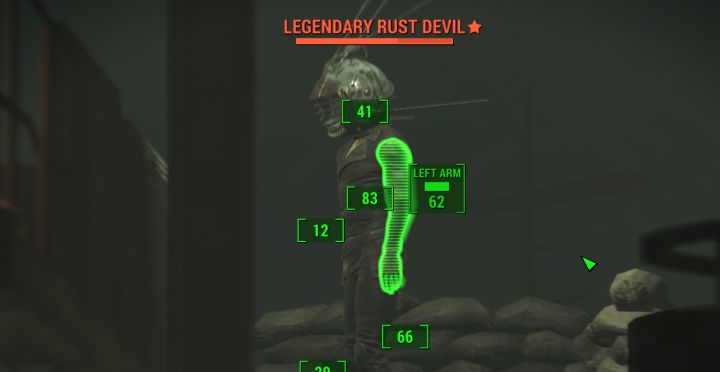 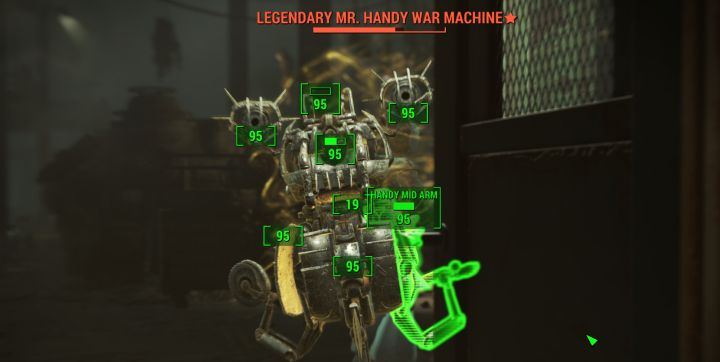 The eyebot helmet, worn by a Rust Devil. The second is a very scary Mr. Handy that explodes when defeated, quite dramatically as many of the stronger bots in Automatron tend to do.

Inside the room down the ramp, you'll face a lot of opposition. If you see a large Mr. Handy, get very very far back from him after he's defeated. I got nuked on my first attempt despite my own advice - the delay is about 5-10 seconds and does not indicate it is happening. Sneaky! By the time you're done with this room, you should have a full set of the new Robot Armor! 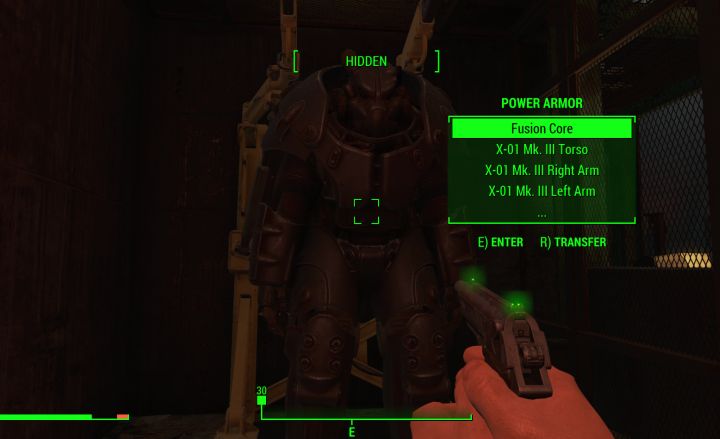 Hey, a free suit of X-01 Power Armor. I feel they're over-gearing us in this place.

In this same area, behind an Expert-locked door is a full set of leveled Power Armor. I found X-01 Mk. III Power Armor using my level 44 character. In order to get it out of there, you may as well suit up if you're not already! If you cannot pick it, save it for later and head further back in the room toward the long staircase leading up. 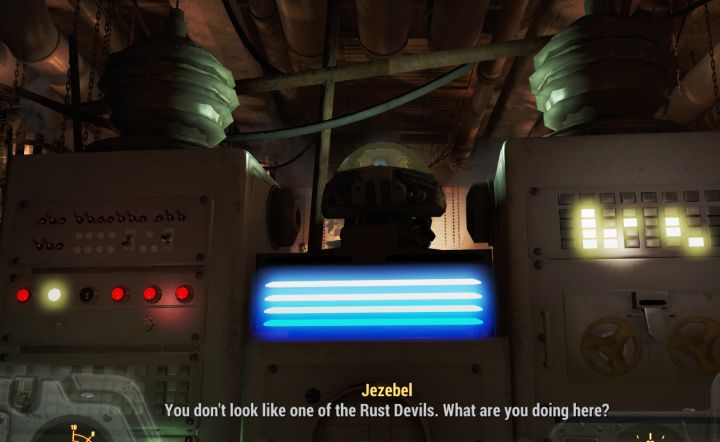 The next part is quite weird, and I'll avoid spoiling any story. It's clear the Rust Devils weren't always so good with technology. Once your conversation with the disembodied Robobrain Jezebel is complete, ensure you are ready for a fight before taking her from the computer. 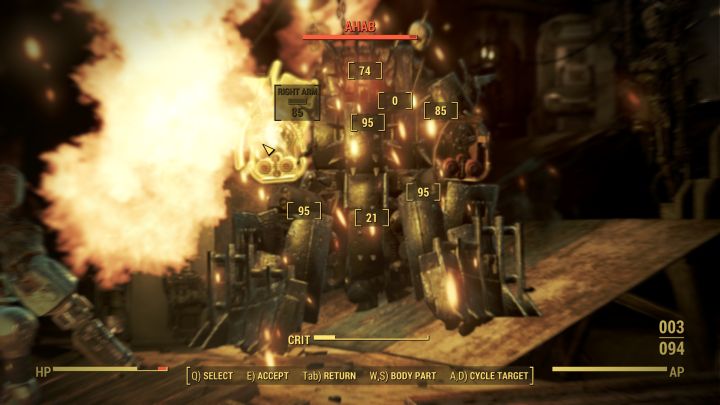 Ahab the Sentry Bot is practically a boss fight

Once you remove Jezebel, Ahab will attack - a massive Sentry Bot with flame cannons that are constantly spewing and challenging to avoid. They are lobbed so you can strafe, just don't run in a straight line. I focused on disabling the weapons using a Deliverer and Kellogg's Pistol combo, though any high damage weapon would work it is likely more resistant to energy weapons. Without having nabbed that power armor, I may have been at a loss to defeat it. Drugs could certainly help, particularly buffjet and psychojet. 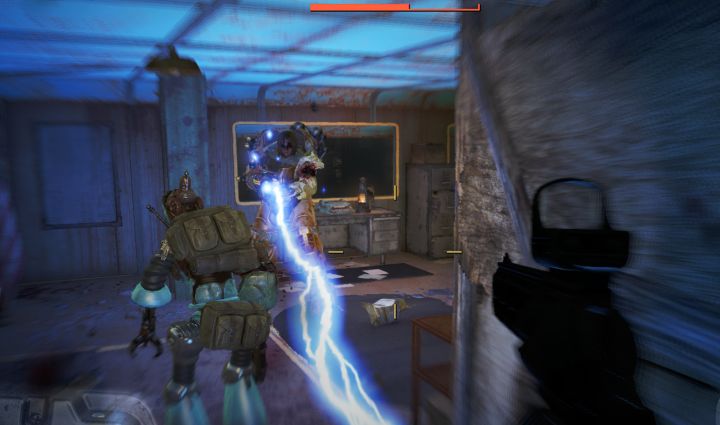 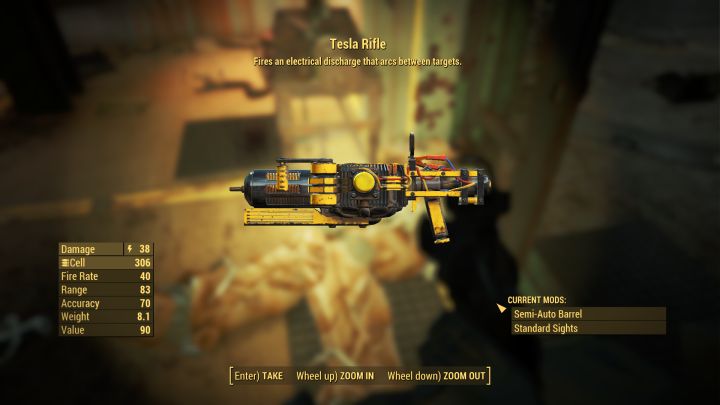 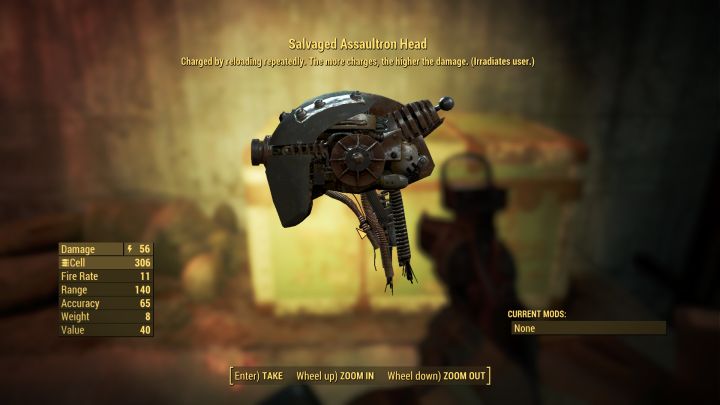 A lot of loot per square foot in this place. You get almost all the goodies that Automatron has to offer. Thankfully, there is a lot of robot hunting to do later on, so it's not all ruined.

On the way out, you should encounter Ivey. She's using Tesla Armor, along with the chain-lighting firing Tesla Gun. It's not that tough a fight if you're using Power Armor of your own, though you may need to be selective in what you carry out given the weight of all this gear! Making matters worse (or better) an Assaultron head, blade, and a Mr. handy weapon can be found as you work your way further toward the exit (which is technically leading where you entered). In this one trip, you'll have picked up most of the new gear in Automatron. I can't cry foul that they're so easy to get, since most builds will only use one or two of the items and a later playthrough could attempt to make good use of the others. 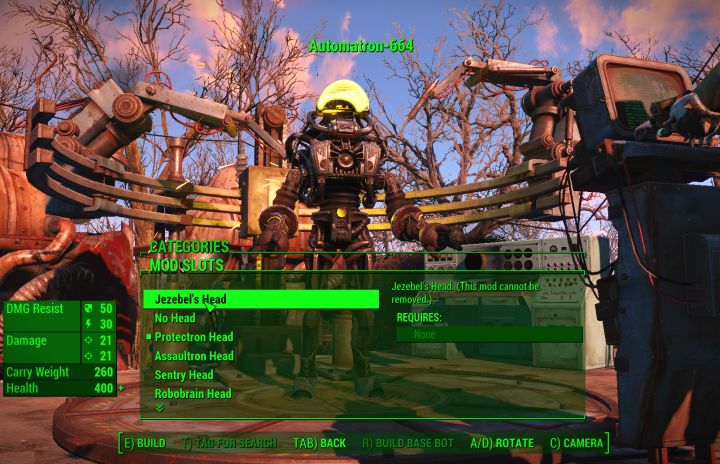 Provide Jezebel a body but don't go overboard. She's a jerk and her thinking is a bit flawed, anyway. Best to save your materials on more deserving creatures.

Your last requirement is to build Jezebel a body, so that she can provide access to the Mechanist. Head back to your Robot Workbench to achieve that task. For head, just select Jezebel's head. Don't bother putting too much work into this one, else you waste your precious materials. After an interesting conversation on robot logic, the Automatron will leave you with the info needed to get to the Mechanist - a robot build with an M-SAT module, a schematic that is uploaded to your Pip-boy.

From here, you can begin the quest Restoring Order, in which you'll deal with the Mechanist.

Pawina
I killed Ahab first and then grabbed Jezebel and now I'm forever locked in.

4
Pawina
Nevermind my partner figured it out!

2
brett
what was the solution? to getting locked in?

1
AnitaTaco
If you don't have the Spray N Pray from Cricket, the Commonwealth wandering weapons trader, I highly recommend finding her and buying it ASAP! (I expect Cricket to turn into a feral at any moment. She's either got a major chem problem or she's incredibly irradiated) That gun is so amazing that I almost feel like I'm cheating when I use it! LOL

1
LeRoy
How do I get out? I a cannot figure it out.

2
Carl
I found that place pretty hard to navigate myself. I found the raider 'boss' AFTER the Jezebel stuff, so I let new loot and the appearance of enemies guide me, but only after wandering way too long. My sense of direction sucks, and the map was little help.

1
Trooper
Did not answer the question at all

2
Carl
Right, I couldn't help at the time. I was lost getting out too, and the main point of my response was that I used the presence of loot to guide me out. If you go too far and don't see any, or see bodies, it's somewhere you've already been. The path out was a different direction IIRC, and bumping into the tesla armor NPC should be guaranteed to happen after Jezebel.