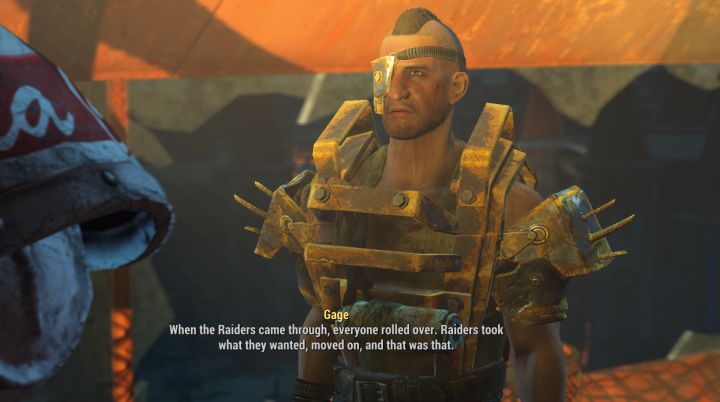 Fallout 4's Nuka World DLC adds a new companion: Porter Gage. He's essential to the early portion of the raider-centric storyline. Gage features a nice companion perk if you can get a high relationship standing, so this guide's focus is his likes/dislikes and what he offers as a follower. You will automatically have the option to recruit him after completing the quest, "An Ambitious Plan and meeting all the raider leaders.

I won't spoil any of his story, Gage is decent (for a Raider). He does not have special interactions in the main storyline, nor a known special quest. He'll behave like most other companions (with opinions) though he does have his own dialog. No one's going to shoot him on sight, so don't worry about your working with him causing problems. He can even board the Prydwen and enter Sanctuary with Preston around without any issue. This gives you some freedom in using him as a companion, so players who do the DLC earlier may enjoy using him. He prefers you to be violent and mean during questing, but does not care which raider faction you support so long as you work toward their success by spreading toward the Commonwealth. When setting up outposts, it's smart to bring him along for some extra affinity points if you'll be killing people. He's quite tough compared to some of the other companions and carries a strong automatic weapon (a handmade rifle) as his default. You should upgrade it, but it's not high priority if you cannot.

Gage is a (Restricted) Vendor 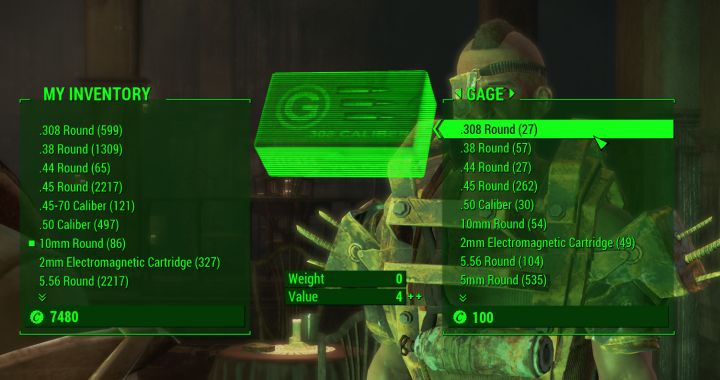 Gage doesn't have many caps, but can trade you ammo and some of the faction-specific armor. His shop only works in the areas around Nuka Town USA.

Gage will sell you a variety of items while you're in Nuka World, and ONLY while you're in the main areas - Nuka Town USA, Fizztop Grille, and that general area. Leave and he'll say his wares are back at the base when you try to buy from him. This does serve a purpose, though he doesn't have many caps (around 100). While you're likely to find plenty of ammo in the market (there are at minimum 2 who always have it in stock), having this third option gives you some more flexibility and may prevent you having to go there. Be careful that you do not buy your own stuff back from him though, as anything he's carrying for you will be in his shop's inventory. Take it back from him with an inventory transfer and you can exchange things for ammo if he can't afford it in caps alone.

Gage's companion perk is handy for leveling your character. His 'Lessons in Blood' offers a permanent +5% XP boost for kills and +10 damage resistance. It's not super powerful, but definitely useful if you want to super-max your character. The following table of likes/dislikes was determined using the game's code so should be accurate. Strange that he doesn't like chem use given he's a raider!

Attack any raiders or begin the Open Season Quest and Gage will not only stop following you, but also become non-essential and hostile. You'll have to kill him and can no longer have him as a companion. He's a raider and won't take kindly to you killing his kind.

Tongle
Yeah, I too thought it was weird when I used a chem he didn't like it. Guess he's straight edge lol.