Using V.A.T.S. when a Supermutant is charging you with a nuke is very handy. You can cripple his leg, or aim for the arm with the mini-nuke.

The Vault-Tec Asssited Targeting System, or V.A.T.S., allows Fallout 4 players to slow time and target specific enemy body parts. The amount one can use this feature is based on AP, or Action Points. AP are raised by having a higher agility rating (+10 per point), and armor mods that increase AP. In this guide to VATS, we'll cover usage of the system, and get into weapon types and modifications and how they affect the AP Cost of each shot in VATS. 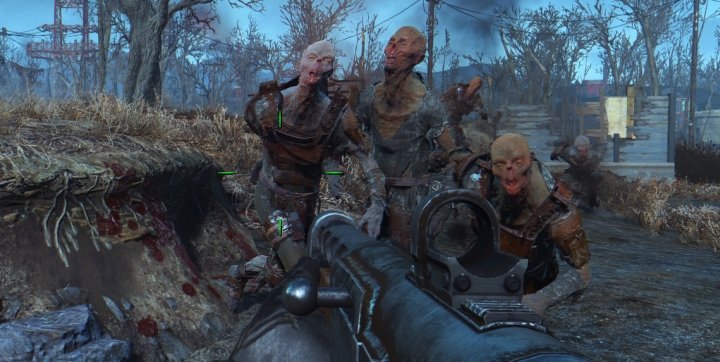 When multiple opponents are rushing you, the ability to slow time is invaluable. Your Max AP, Weapon type, and Modifications you've made to that weapon determine the AP cost per shot.

About V.A.T.S.
Playstation 4 and Xbox One users both press the L1 (or LB) button to go into V.A.T.S., while PC players press 'Q' (this can be changed). While in V.A.T.S., time seems to slow to about 5% of normal, meaning you're not invulnerable but not going to get hit as often while you seek targets. You are able to select different body parts to attack while in VATS, and when done the character will fire off the string of shots. While in V.A.T.S., you can select to aim for head shots - which typically do double damage on humanoids, though various enemies have different weak points (Deathclaws' is the belly, but it's hard to hit). These are good for fast kills, but sometimes it's better to cripple a limb in a longer fight. For weaker monsters, you'll often kill them before you can cripple a limb, but enemies with high life may have limbs weaker than their total health pool.

Players executing moves in VATS take 95% reduced damage, so higher agility builds will be able to make up for possible weakness by spending more time using this mode of combat. Those who have Action Boy and Action Girl will be able to use VATS 25/50% more often than those who do not use those Perks. This is only after you've hit the execute button and can be seen when you fire a fat man at a nearby target, as you should benefit from the reduction. The damage resistance that VATS provides is huge, so VATS builds have definite strengths and also allow players who are not good at shooters to excel at Fallout 4 despite its heavy gunplay.

Melee and VATS
Melee players still benefit from VATS due to the fact that it's the only way they can benefit from critical hits, while also giving them time to queue up attacks on multiple opponents with the slowed time benefit allowing them to perform superhuman feats, so long as targets are in range.

With the Blitz Perk, this becomes less of an issue. Sneaky characters would be especially foolish to pass up VATS usage, because you can crit on a sneak attack along with Agility's Blitz Perk, which will let you deal even more damage - with Blitz that base damage gets multiplied by the distance, then sneak attack and crit bonuses for massive damage. Yeah - I love that Perk and have to recommend it even out of context. Blitz is almost essential for melee users, very hard to pass up that amp'd damage and VATS distance, allowing you to close gaps instantly.

Critical Hits are used in V.A.T.S. and only gained by hits in this mode. The rate the meter fills is based on luck.

Critical Hits
Critical Hits are now used solely in V.A.T.S. and are controlled by the player. As your critical meter builds, you're able to use the shot at will by pressing the jump button just before the shot is taken in VATS. With Critical Banker, you can store more than one Critical Hit. At 10 luck, you can expect it to take about 5 hits to build the meter to full. The rate the meter builds is based on the character's luck and certain unique bonuses that can be found on weapons. The amount of damage a weapon will do on a critical hit is based upon the weapon type - sniper rifles will do more crit damage than a pipe pistol. 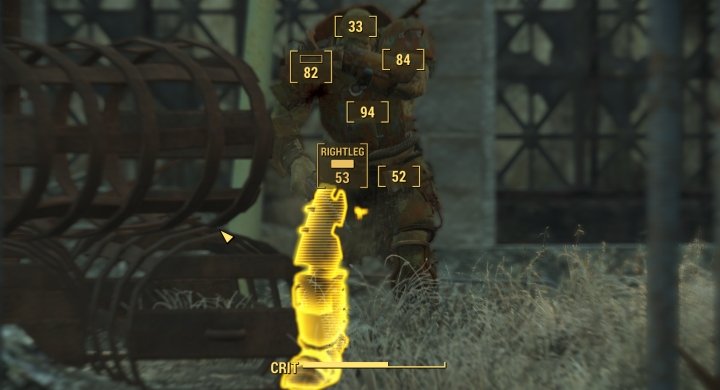 Crippling limbs can come in handy during big fights, in order to weaken one of your opponents. It's also helpful when you're up against one enemy that is much stronger than you. Otherwise, enemies will die before limbs are crippled.

Crippling Limbs
Different parts of the body being crippled have different effects on various creatures. The below list is for a human, there are many creatures in the wasteland. A Radscorpion's tail being crippled may prevent it from stinging you, a Deathclaw cannot perform its leap attack with a crippled leg. Enemies that are melee in general will have a harder time reaching you with crippled legs. Crippled heads won't have a noticeable impact on many enemies, it's just for more damage. On many enemies, it may impact Perception and allow you to slip away when sneaking. Note that if the bar is depleted, the limb is already crippled. Most enemies will display an animation when this happens. You may want to switch to another, or else fire as you were and reduce their HP to kill them.

For the player, a Stimpak will heal a crippled limb.

Weapon Type is a big factor in AP usage, but so too are the mods you place on it. Costs can be cut to 1/2 of normal if you modify it correctly. Sometimes, you DO want a weapon with high AP cost and range, though. This is great for repeat sneak attacks when you've invested points into sneaking.

While I don't have an easy way to get exact numbers on AP from a single shot, I have some good observations for you that may impact your decision-making when modifying weapons. If you're a heavy V.A.T.S. user, with plenty of Agility and Perception, you can certainly benefit from this information. Certain parts of a weapon will greatly impact its AP usage. First - Rate of Fire is a big indicator of how many shots you can get off in VATS, although it's not the be-all-end-all. For automatic weapons, rate of fire will increase the amount of bullets/lasers per burst, while on a normal gun it is for single shots. The higher, the better, in most cases. The Weapon Type plays the single biggest role on AP cost, but we can reduce this AP cost - sometimes at the expense of other stats, particularly range/accuracy in a number of ways. You usually do not have to sacrifice damage, just your chance to hit from large ranges. 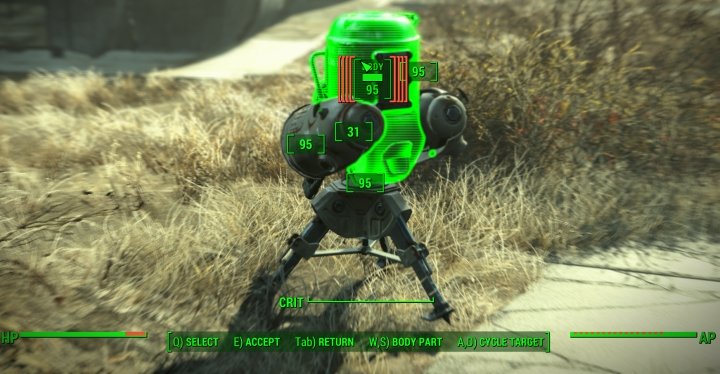 The maximum number of shots that can be fired in VATS is 16 - if you reach this cap, you'll have AP left over to do it again rather soon.

Mod Those Weapons!
I did a lot of testing to come up with this info, so I hope it's helpful to some of you when it comes time to tweak your weapons. For me, this means an extra shot out of my sniper rifle in VATS by reducing the size of the stock and changing the scope to small. A scope-less sniper rifle becomes a hunting rifle, but it's just a name. I have high Perception, so the scope size reduction doesn't hurt me much. I hate aiming manually with scopes, and would rather use the AP in VATS rather than holding my breath - but your accuracy is sometimes higher than that of VATS if you're good with controls. Regardless, knowing how these things affect AP usage in VATS may help you test and tweak your weapons so that you can get maximum efficiency out of them.

Example Articles for Tuning Weapons:
I've started a series on tuning weapons for AP usage in VATS, or else to make them good without VATS in mind. Take a look at:

4
stffn
Thanks for the all the great work on this guide! Found this article very useful as im doing a sneaky character relying on high AP when using rifles.I recently accquired the splattercannon in nuka world, which is a legendary "homemade rifle". There are so many barrels and im a bit confused...the one im using is called "short covered sniper barrel", but i still dont get a lot of shots in VATS. Maybe the sniper prefix is making it use more, even with short barrel...?

6
Funkkalo
Crits can occur outside VATS when using overdrive or bashing.

3
sethy wethy
Thanks for creating this guide. Very helpful!