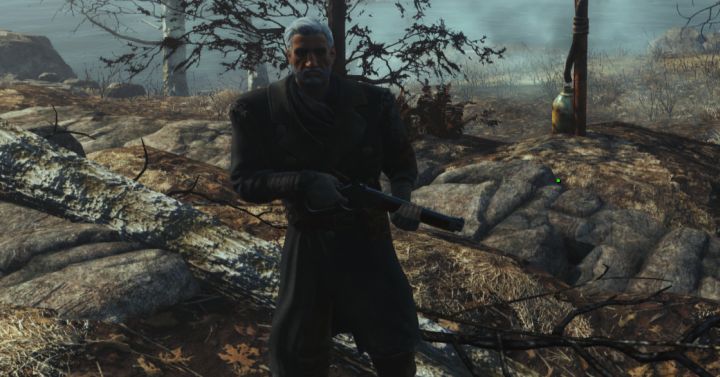 Old Longfellow wields a lever-action rifle and can hold his own in a fight. For much of the DLC, you'd want Nick Valentine to flesh out the story, but Longfellow's Perk is worth chasing for the long-run.

Old Longfellow is the guide that Captain Avery will suggest accompany you to Acadia when you're done with Far From Home and ready to begin exploring Far Harbor via the Walk in the Park Quest. Once you finish getting to Acadia, Old Longfellow will be available as a companion. His default is to wield a lever action rifle, which is not quite so bad.

You can easily reach Longfellow's Cabin, just head a little north of Far Harbor then cross this narrow portion. At the beginning of the DLC Quests, you'll find him in the town bar.

Old Longfellow is a fully featured companion, and even comes with his own simple Settlement to the north of Far Harbor (Longfellow's Cabin). This allows you to establish a foothold on The Island and begin stockpiling your items. You can send another Settler to make a Supply Line here to have access to all your crafting materials back home.

Quest: Shipbreaker
Watch for a radio frequency while exploring the Island - Shipbreaker's radio frequency. You can use this to track down a rare creature, and you can then go to Longfellow for a unique Harpoon Gun called Skipper's Last Stand. He doesn't need to be with you for any of this. 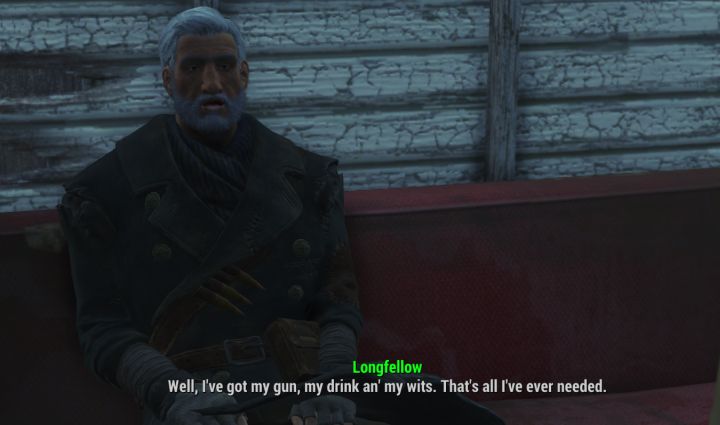 Just about everything else, he's indifferent to. He doesn't mind if you pick locks, even if the door is owned. Thankfully chem addiction is separate from alcohol addiction. Old Longfellow won't love it if you get addicted to alcohol by imbibing - he won't react to it at all. Let me know in the form below if you find more things that Old Longfellow likes and dislikes. Some things may fall under his 'Being Peaceful' when it comes to quests.

Lev
Step one - go to Nexus and get the mod that allows you to have Dogmeat n addition to a regular follower (which is what Bethesda originally intended, apparently).Step two - get into fights.Step three - stimpack Dogmeat whenever he goes down.Old Longfellow really likes that, and will soon idolize you.He also likes when you bargain hard for extra caps, it seems.

2
Lev
Oh, and public service announcement - do not make a drinking game where you take a shot whenever Old Longfellow mentions whiskey. You will die of alcohol poisoning.

12
Carl
Thanks for pointing out the extra caps thing, it comes up a lot and is certainly the 'Being Selfish' option in many quests.

2
MudCrab
I'm not sure it is alcohol in general, I think it is only spirits. I have a memory of getting no reaction after drinking beer.
Once I discovered he liked it when you drank spirits I spent most of the rest of the DLC off my character's face until I gained his perk. Then I switched back to Nick for the special character arc stuff.
But yeah, pretty sure I got no reactions when drinking wine or beer in front of him.

4
Bob
Longfellow disliked me bragging about killing Courser's and also taking Dejin's quest to kill the Courser.
It actually put me into a speech loop where I was calling everybody Dejin.

3
Weirdly Cool
I had the same problem with the speech loop. I killed the Courser but then went to Vault 118 before reporting back to Dejin. After solving the murder I couldn't initiate conversations with anyone and kept calling everyone Dejin. I finally went back and reported to Dejin in Acadia and it stopped.

1
ice wolf
As most no long fellow has glitchs. several ive seen but only exp once ore twice. he continues to talk and nvr shuts up. if exp this, it has something to do main quest. hes will not respond to any commands but trading items. this glitch will fix it self upon completing dima main quest. infact assoon as you hand in some quests be four talking to dima. this is for all people that are still having problems.