Visions in the Fog: Joining the Children of Atom Faction

I highly suggest Fallout 4 Far Harbor players to join the Children of Atom at least for a while, as you can buy some unique gear from them. You can do this by visiting The Nucleus, which is revealed by getting the first issue of the Islander's Almanac Magazine located in Far Harbor's bar, but you're most likely here due to a Quest received from DiMA. Whether you legitimately want your character to join the Children, or you're just doing it to get inside their base for DiMA's Best Left Forgotten Quest, you'll be given a task to prove your worth. 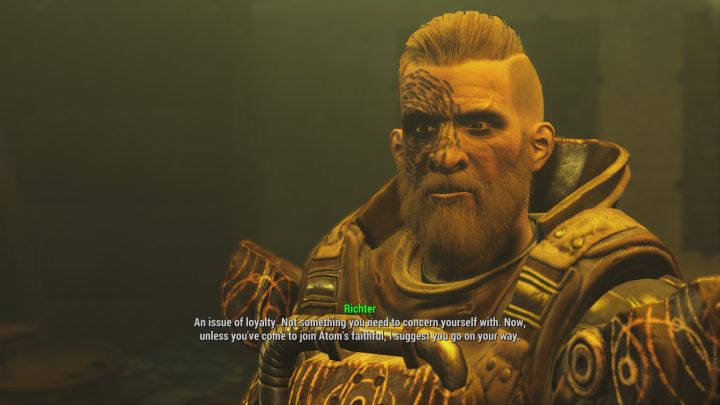 Grand Zealot Richter will make you pass a test - a ritual to drink irradiated water and trip out.

When you get to the Nucleus, you don't have many options in the conversation, you either do it, back off for now, or attack them and become enemies with the faction forever, resulting in there being no possibility of peace between the residents of Far Harbor, Synths in Acadia, and the CoA. 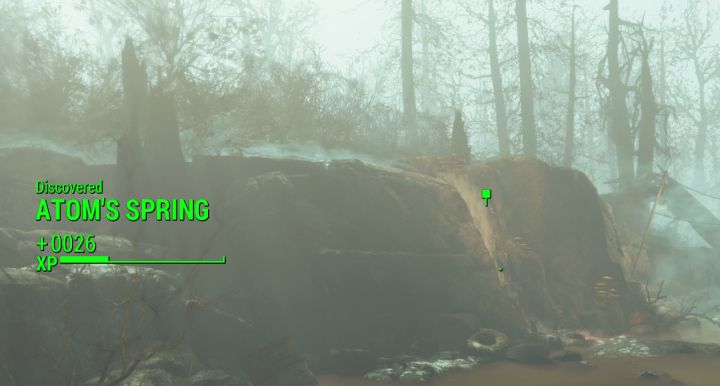 The Ritual
You will need to travel to a spring and drink the irradiated water to complete a ritual that is required of every Child of Atom on the island. This is a simple enough task, though you should expect some Gulpers on your way to the spring. They're worse than the radiation, which isn't particularly high. The spring itself is positively putrid and looks like raw sewage. Using a Rad-X at this point can help reduce the amount of environmental radiation you take and will be helpful for the rest of the quest. Can't do much about the drink from the stream part without the lead belly perk, but it's not too bad.

This Ghostly Figure will lead you to a shrine

Your character starts tripping, and you're told to follow the ghostly figure up on the ridge. She'll lead you to the Children of Atom Shrine, a holy site. Don't just run in, because the place is infested in Ferals and the lack of combat along the road may lull you into a sense of security.

Once you've offed the ghouls and explored the surrounding area, go inside. There's a note on the cabinet to the right with a clue and highlighted words. If you look near the periodic table of the elements, there's a scrawling on the cabinet next to it that will let you unlock the terminal. 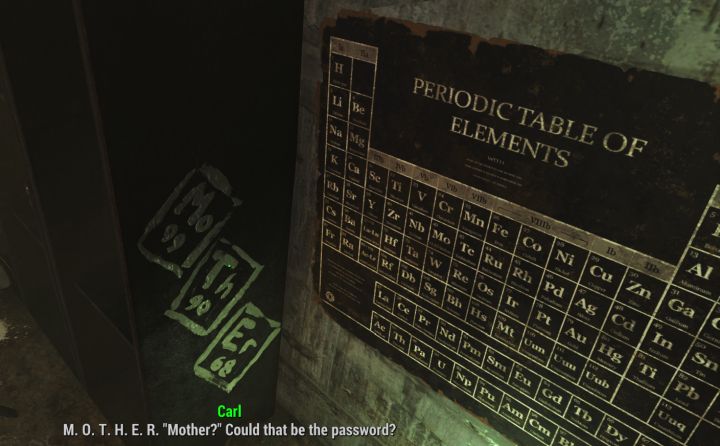 The Mother icon, and a note. You can ask High Confessor Tektus about the idol.

Reporting The Icon & Vision
Return to The Nucleus and Grand Zealot Richter, who has a remarkable resistance to the radiation, given he seems to be one of few to have hair. When you speak to him, the Sarcastic response and Make Something Up are hilarious, and don't set you back so I suggest you try it. All in all, explore the options via dialog, ask some questions, and you can now join the Children of Atom. It almost seems like there's something to this whole Atom thing, though maybe when you started hallucinating a zealot took advantage and led you to the shrine and it's all a setup. Who knows?!

High Confessor Tektus, leader of the Children of Atom

From there, you are a member. Maybe you'll be lucky and one day experience the Division through the glow, which is probably the skin melting off your face from radiation. Anyway, you're one of them and can now pursue tasks for the Children of Atom through the What Atom Requires side quest and figure out who you're going to be loyal to from here on out. A word of advice: trust is important in many of the quests, and building it is ultimately done through side quests. You'll have more influence with the groups the more you do for them, and of course there are rewards. To my knowledge this matters most with the people of Far Harbor, but may also come up with CoA if you are to pursue a true peace on The Island. 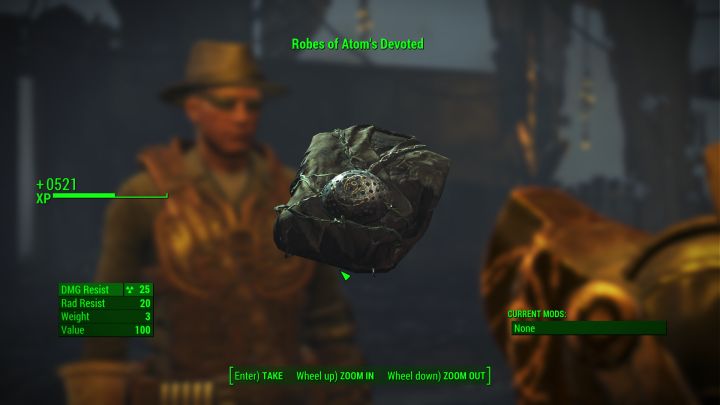 At time of writing this guide, The Robes of Atom's Devoted say 20 DR when you get them, but only 5 from the pip-boy's inventory screen.

You're given Robes of Atom's Devoted, which have 25 rad damage resist and a mere 5 normal rad resist, which is strange. Sadly, the robes cannot be worn with other body armor, and are useless in combat but can be upgraded with Ballistic Weave from the Railroad. You can head inside The Nucleus and listen to the Tektus sermon, and learn of his plans to seek DiMA's data. You can pursue a side quest with him, as well as a few cult members (notably Ware, who can give you a recipe!).

Because you have access to The Nucleus, you can actually use the marker to locate the place where DiMA's memories are stored and move on to Best Left Forgotten with no repercussions with the Children of Atom. It's up to you to decide who to tell about it. The Children of Atom currently don't know how to get them, though Tektus knows of them and seeks them to wipe Far Harbor off the map..

Gary
Hey there, Carl!So I actually just got Far Harbor today and I have to say, the Robes of Atom's Devoted are... bizarre. Without anything else modifying their behaviour, they give a rad resist of 25 with a secondary bonus of 160. So that should give me 185, but when equipping them I end up with roughly 1100 rad resist instead. I'd have to do some testing to accurately say all the values and how we end up with the final number. But, with absolute certainty I can tell you that the robes are actually better than a Hazmat Suit.-- Later Edit --I was typing that out and did a little research before submitting the comment. As it turns out, the robes have a secret scaling effect and can make you completely immune to radiation, so that's worth noting. The amount of radiation resistance apparently scales with your current radiation level. I'd recommend playing around with it, the effect is quite unique.