Fallout 4's Scav! Magazines, available only with the Nuka World DLC, offer some unique perks to players. Finding all five will give you a variety of different bonuses, from making you stronger when you have less money to improving speech checks and raising hand to hand and knife damage. Here are the locations of all five scav magazines. Depending on your character's build, you may not care to take the time to find them all so I've also included which perk they give you. 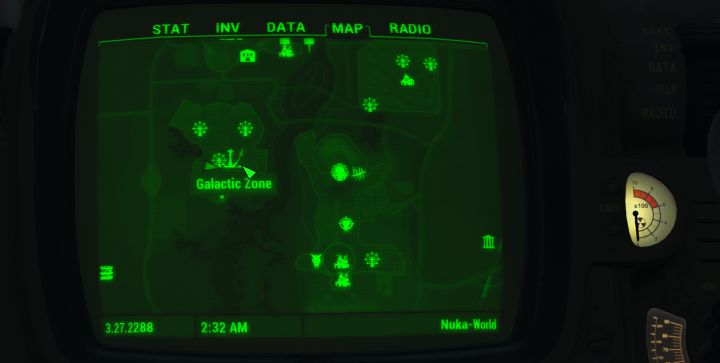 SCAV! Villainous Virtuosity Perk: Increases Speech Challenge Success. This gives you a +10% chance during speech checks, perfect for talking settlers into leaving for raider outposts.
Location: Found near Star Control at the Galactic Zone
Details on Finding It: Climb the stairs in the picture above, which are just to the left of the Star Control entrance at Galactic Zone (straight from the entrance). At the top, there's a red railing to the right. You can see a small courtyard below. The magazine is next to a bus on a crate. If you don't want to do this area, you can climb the wooden stairs and jump over. You'll be right back from where you came. 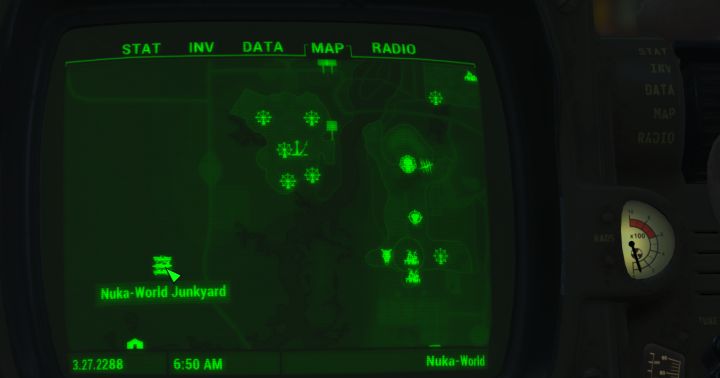 SCAV! Bladed Bravado Perk: +25% Combat Knife and Switchblade damage. Increases the damage on top of weapon mods. The increase will be visible when using a weapons workbench or managing your inventory.
Location: You can find it at Nuka World Junkyard
Details on Finding It: Expect to battle robots to get this one, but only a handful. Head into the large building (pictured). Now look for the stairs to the second level, follow it all the way around to the front of the building and you'll see a desk, computer, and animatronic alien. You can find it lying there. Drop down and exit the building if you desire. 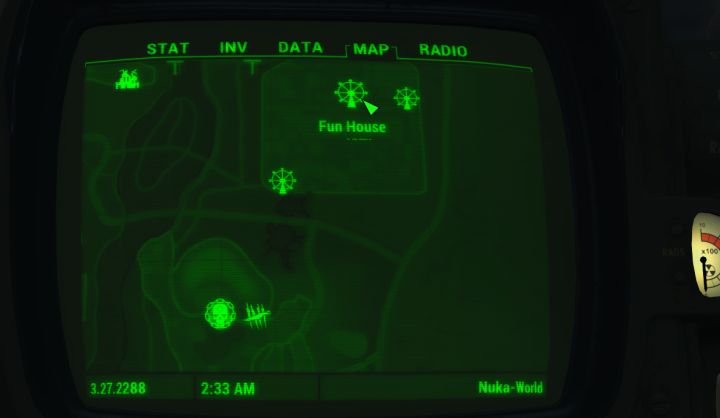 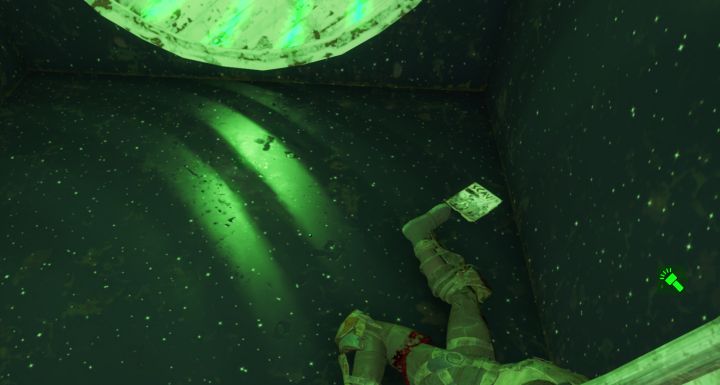 SCAV! Pugilistic Propensities Perk: +10% hand to hand weapon damage. Makes your unarmed attacks stronger.
Location: Found inside the Funhouse in Kiddie Kingdom
Details on Finding It: You can get this while doing the A Magical Kingdom Quest, but you can go back if necessary. As you can see, you can select the Funhouse as a fast travel destination if you've been there before. I recommend you go through the mirror maze once again, as you would on a first trip. Get to the hallway with psychedelic spinning swirls and several tunnels. Go to the first real tunnel on the right, then hang a left and go straight. You will find a dead raider and the third issue of Scav! If you're doing the Kiddie Kingdom quest, you can read the walkthrough for rewards. 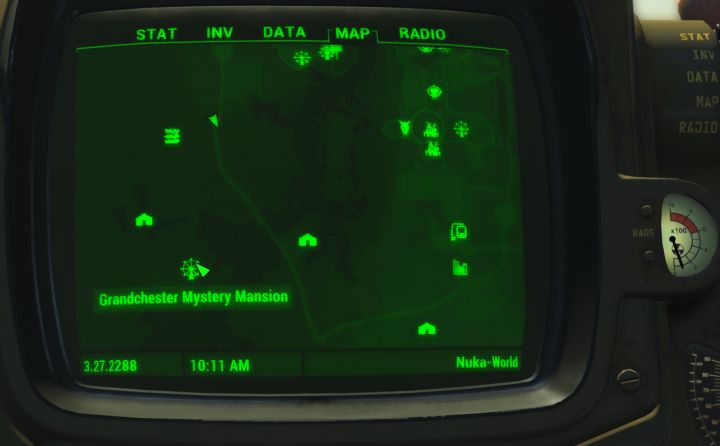 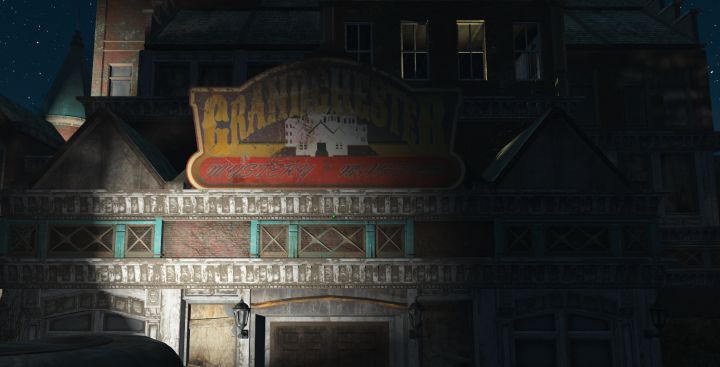 SCAV! Cautionary Crafts Perk: +5% explosives damage. Improves everything from molotovs to the explosive legendary affix and the fat man.
Location: Found inside Grandchester Mystery Mansion
Details on Finding It: You Must Pick a Master Lock to Get This Pay the entrance fee to the robot, or else pass a speech check to get inside free of charge. The robot wants money (real money) and won't take caps, but you can find a ticket at its feet since the person selling them is dead! You can also make the Protectron dead to get inside, take the key off its corpse. Once you get inside the mystery mansion, your goal is to get to the attic, where you'll find Scav Magazine Issue 4 on a crate. This place is a bit of a maze, kind of a haunted house with mines. Truly horrific. You'll have to follow the tour. Nearly everything requires the grandchester mystery mansion key (another one besides what you get from the Protectron).

Once the tour director is done speaking, a door will open to the next room. Use the circuit breaker in the flamethrower room to disable them, and kill the Mr. Gutsy. There are plaques you can read on the walls as well. Once past the gas room, you'll be in an area that looks like it used to be a store. The next room has three very deadly grenades hanging from wires. Be careful! Later, you'll face Zachariah, a high level gunner who is quite tough. Read the terminal, and be sure to get the Nuka Punch recipe from the dresser. You can pick the master lock here to get to the attic. On Zachariah's corpse, you will get the key to get out of the mansion using the door in that same room. 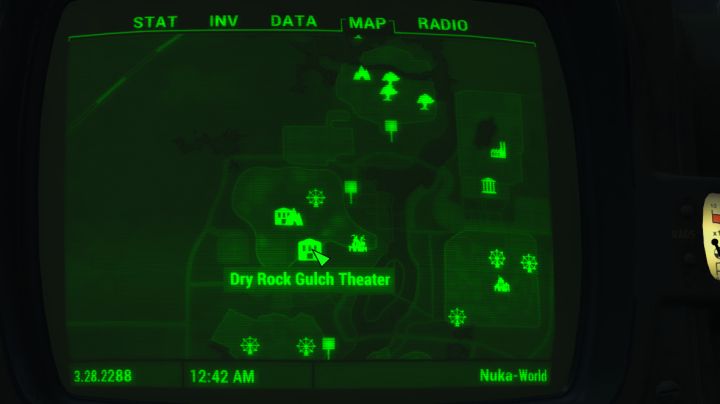 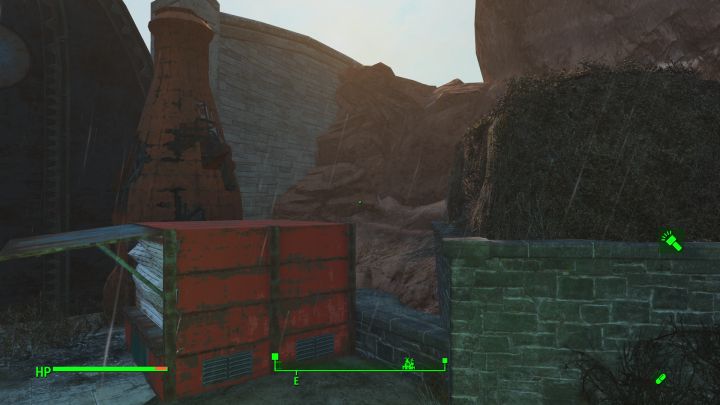 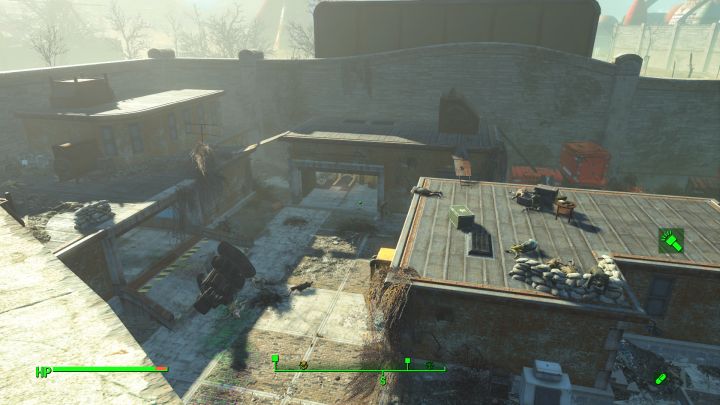 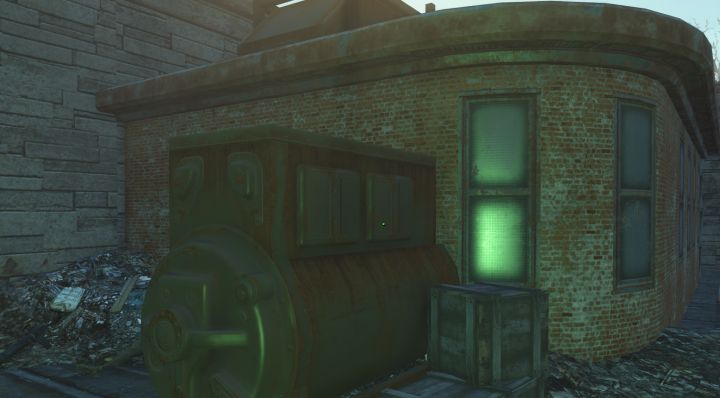 SCAV! Motivationally Moneyless Perk: +1 Strength and Endurance if you have less than 10,000 caps. +2 STR/END if less than 1,000 and +3/+3 if you have less than 100 caps.
Location: Found at Dry Rock Gulch
Details on Finding It: This one is on top of a building, somewhat annoying to get to, and harder to describe than the others. I recommend the theater as it's close to where you need to get up on a wall. Facing the entrance to the theater, go left and follow the wall until you can climb up on it. You'll pass a nuka cola bottle, then see a little red shack near the entrance to Dry Rock Gulch. Look behind it and you'll see some rocks. Jump up, then use the hedge wall to jump near the top of those rocks. Now you can jump up on the stone wall. The wall will split into two paths, take the left and follow it. You can see in the shot above there are bridges to use to cross the rooftops of the buildings. Getting out is similar. If you've dropped to the ground, look for a way up (the third picture shows a crate and generator you can jump on). Be wary of mines in this entire area, it's quite dangerous.

Brad
Are the Strength & Endurance bonuses for Scav issue #5 permanent based on the caps you have at the time you find the issue or do you need to be consistently broke as a joke to get the +3's? Sorta like the perks where you have to maintain a high rad level to maximize their benefit? I'll dump the 60k caps I have for 6 immediate & permanent perk points, but not if I lose them as soon as I sell off a good haul.

3
Jonathan Elcock
It is a perk based on your current caps, not a permanent bonus.I'm buying a lot of one cap ammo to keep my caps fairly low, while still being able to trade for stuff (character has high Charisma and trading perks).

4
Slivermoore
So let me get this straight, SCAV! Issue 5#'s bonuses are dependant on current cap count? So when I picked up the magazine and got the +3 bonuses it will only stay +3 as long as my cap count is the lowest amount stated. But if I were to go over the bonuses change to +1 or +2. Dude that really sucks... I m like lvl 140 with more than 100k in caps. So that's why my stats went back down after so long. :( they really should change this..

3
heister
had to reload a few times to make sure this is true. Yeah, .38 perhaps is the best way to maintain your character's wealth now.

4
Andy
For issue #5 there is a door to get into that area so you do not need to climb on the wall. Standing outside Dry rock, facing the east entrance, follow the outside wall to the left(south) staying right next to it, about a 10 second walk you will find a hedge wall that you can walk around, behind the wall is a door with a terminal with no password that will open the door.

10
ReapersClaw
Hey for number five of the scan issue if you follow the wall along the outside yoll come along a hedge that is fake with an door leading to that area so you don't have to climb.

4
Carl
Thanks to you and Andy, I'll edit these methods into the guide next time I get in game. I need to do a page on dry rock gulch anyway :)

6
Charlie
If I only want to do the raider camps to turn on power at Nuka World, what will the raiders do if I leave there happiness really low and don't supply them with food and just bare minimum for beds and a recruitment radio. Will this get me the power plant and then I can do "Open Season" and recover my settlements?

1
Carl
Yep, just mind that defense thing and make sure there arent any turrets in case you get a glitch. Save before open season, some have said it glitches.

2
Slivermoore
It wouldn't be so bad if we could deposit caps in storage like in the last 2 games. But we can't, and keeping my cap count down 100 or less is going to be a pain in the *****.