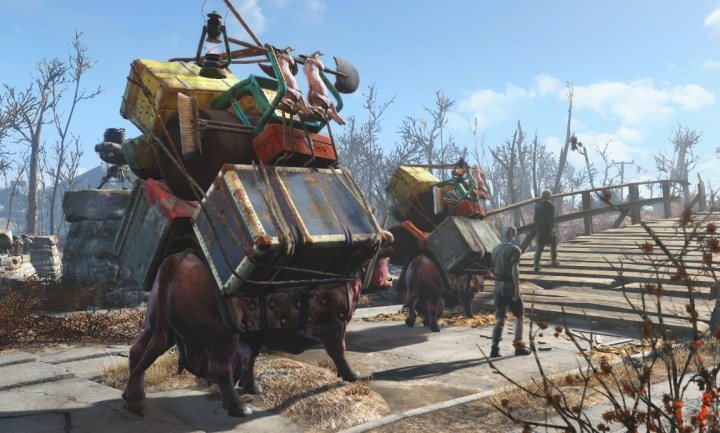 Provisioners with Brahmin, transferring resources between my Settlements

Supply lines, unlocked with the Local Leader Perk, are very handy for transferring resources between your Settlements. Players have a lot of questions about these, so I'll demystify a bit about how supply lines work, and show you how to make them.

Setting up a Supply Line

Supply Lines are made while in the Settlement Edit mode and selecting a 'Settler' NPC.

To set up a supply line (which requires the aforementioned Perk), you must enter the build mode (Tab on PC) while in a Settlement and select one of your residents named, "Settler". Unfortunately, NPCs like Marcy Long cannot be used to make supply lines. From there, you should see the button you're required to press to send them to another Settlement. They then become a Provisioner, with a pack Brahmin to carry goods between your established locales.

The connection is instant. While they do travel back and forth, provisioners being assigned will instantly make the resources available to the other Settlement, but you cannot withdraw them there. They are shared, but only available for pickup in the Settlement in which they were produced. While Settlers assigned as Provisioners travel, they will not be attacked by the Commonwealth's baddies unless you happen to be in the area, so it's likely you will never lose one to violence. 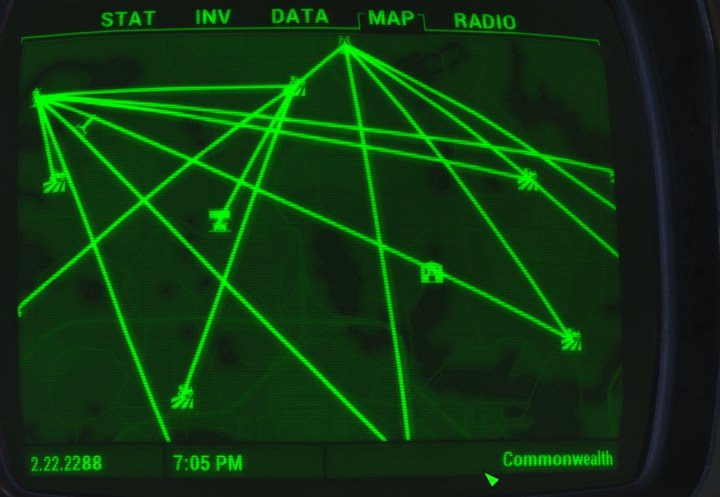 To see the connections you've made, go to the Pip-Boy and view the map. Look to the bottom of the screen for the button to press to show supply lines on the map. Additionally, you can head to the Pip-boy and go to the Data > Workshops tab. There you can see a list of all of your Settlements. If there is a problem, there will be a warning sign next to the stat for that 'Workshop'. If it's defense or beds, you will need to build them there. If it's food or water, you can take care of it by sending a Supply Line if you have enough available elsewhere to satisfy them.

What Supply Lines Do

Supply lines send food and water to other Settlements, while also allowing you to craft without the Settlement actually having those items or you carrying them around. If you have copper in one Settlement you can use it to build in another if they're connected. This makes building up your Settlements' defense rather easy if you have the materials. Adhesive and other things used for weapon/armor mods can also be used from afar as well as those for cooking/chemistry, allowing you to mod items and make things without carrying all that junk and burning up time travelling across the map. 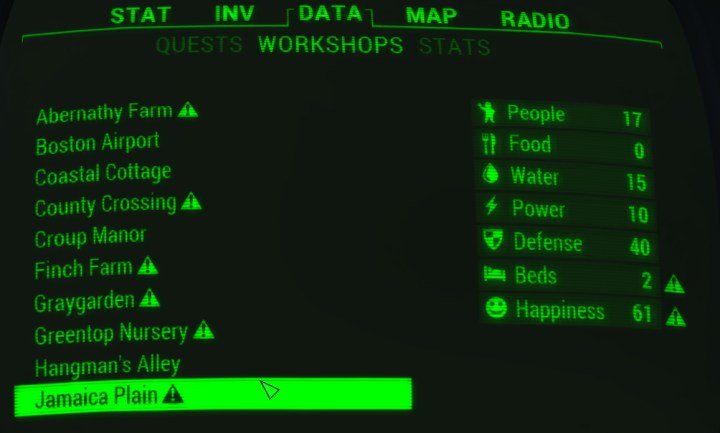 There is not enough food or water in this Settlement, but it's not a problem as it's connected to Sanctuary, which makes an abundance. Looks like I need to make some beds, though!

While the actual food and water excess in your Settlement is stored in each Settlement's workshop (and only accessible for withdrawal there there), excess can nourish other Settlements you've established. As you can see in the screenshot above, the town does not have food production enough to satisfy the residents (1 per population, as well as water), but it's not a problem. This is because it's connected to Sanctuary, which produces a lot of food and water.

Additionally, Sanctuary is connected to other places that also have excess food. This means they all share the same pool. Technically, the total food and water produced by your Settlements connected via supply lines can be subtracted by the number of villagers. If you have excess of either resource, your Settlement will not take a happiness hit despite it saying in the Workshop menu that you do not have any food/water production there. Of course, electricity and beds cannot be transferred, and stores in other settlements will not affect the happiness of those connected. You'd need restaurants and doctors to get that extra happiness.

If you use one to three well-defended towns as a hub (with high defense they won't be attacked), your other Settlements will not lose access to shared resources if one town leaves the Minutemen due to low happiness or an attack. I've never had this happen but think it's possible. Making webs in certain configurations could cut off half your Settlements from one another if a linked town is lost. There's no need to worry about distance. Sanctuary can connect to Jamaica Plain and other distant Settlements without that being an issue, so I suggest you use that or another town you've build up as your main hub.

So that you don't run out of Settlers to work in each town, go to the new Settlement and have a Settler connect to Sanctuary from there. Otherwise, you would have 6-10 of your maximum Settlers working Supply Lines and not have a high population in that main town. You will want people managing shops and producing food, so there's good reason for that. If each town connects to the hub then they lose only 1 worker each.

Red
Are gear mods shared? If I try to craft an Advanced receiver onto a gun, and in another [linked] town I have that receiver sitting in the workshop (from having pulled it off a weapon there), will it let me?

3
Carl
Wow great question. Probably didn't get to this in time to help you, but for future readers I just tossed one in a workbench and went to another settlement. Sure enough it was available, 'attach mod' as opposed to craft. So you can stock all your unused mods in one place and have access to them anywhere with a weapons/armor/power armor crafting station :DI'll edit the page to reflect this later.

0
Steppa
One settler in each town needs to be tasked as a provisioner as soon as possible. I've got 18 residents in Sanctuary and none of them are provisioners. All the provisioners come from the satellite settlements. I do not see the benefit of making a "ring" pattern of provisioners and trying to keep track of all that.