The Mechanist's Lair in Fallout 4

After four pages on this and not wanting to post direct spoilers, I can now write more about the Automatron DLC without worrying about spoiling story for people. If you haven't finished the Mechanist Quests, don't read this if you care about spoilers. This is for people who have wrapped up the four Mechanist quests. Let's look at all the rewards you gain for completing the Mechanist story and this sweet new superhero hideout and technology we've inherited. 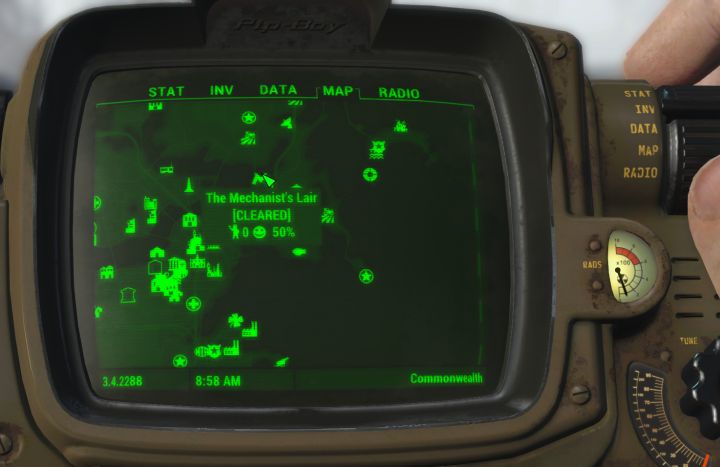 The Mechanist's Lair offers convenient fast travel similar to any other Settlement you own, with a convenient spawning point.

Mechanist's Lair
You can leave Mechanist's Lair a will, sort of like the Institute. You'll also appear in a convenient place when you go back to the base. Obviously you'll want to loot everything in this place and get it stored in your new workstation. The lair now counts as a Settlement, though it's not yet know if it needs defense in order to avoid attack. I doubt it based on its hidden nature. 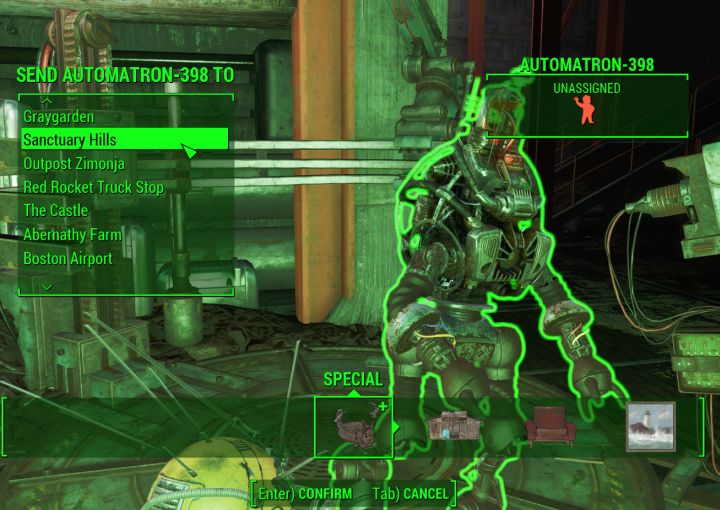 Automatrons can be used as robot workers for your Settlements, in order to set up supply lines, farm, or even defend. They don't need to sleep or eat, and can thus take over entire Settlements. Build your own twisted utopia.

In case some people don't realize it, I'll note that you can connect The Mechanist's Lair to your other Settlements by using Local Leader Rank 2. Just enter building mode, select a new automatron you've created, then hit the Supply Line button. Now you have access to be able to build in the Mechanist's lair, and will have storage shared between your other Settlements and the lair. 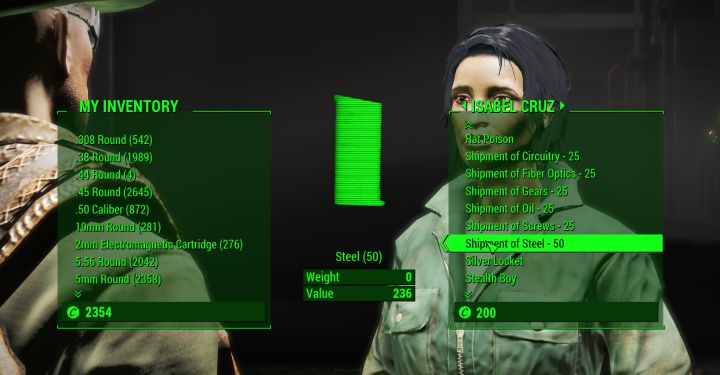 Trading
Most of this is no different whether you let the Mechanist live or decided to kill them either out of a sense of justice or for your own enjoyment, aside from these two things: mechanist as a merchant, and the way Rogue Robots will work. Isabel Cruz becomes available as a merchant once you have taken over the Mechanist's Lair. She sells shipments of Circuitry, Fiber Optics, Gears, Oil, Screws, and Steel which all come in handy for making robots. This is hardly unique, but worth noting - the 'Trade' menu is not to give her gear. 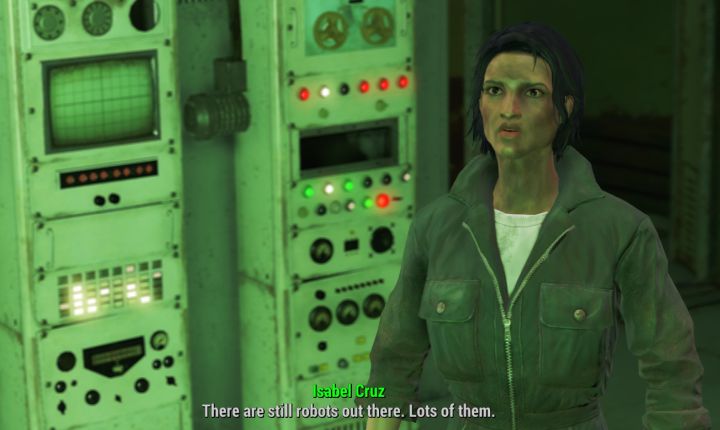 Isabel (or Ada) will offer you to repeat the Rogue Robots quest, which provides some great XP..

Rogue Robots has you hunting down robots in the Commonwealth, and it's a GREAT way to get experience to level up and be sent around to random areas where you may find new things. What differs is who gives it to you and how repeating it works. Isabel will give the quest to you if she's alive, but Ada will take her place if you've killed the Mechanist. The experience is granted in the field with either option, meaning you don't have to turn it in. This allows you to talk to Ada and get a new one, saving you a fast-travel back to the Mechanist's Lair.

Rogue Robots also sometimes leads to Legendary enemies, and other great encounters that provide opportunities for rare drops. Experience is awarded as soon as you kill the rogue robot.

Isabel will become a bit more relieved after you've completed so many of these, as though the damage she caused has been undone. This, despite the fact that you can continue doing the Rogue Robots quest as long as you'd like - and I recommend it for leveling. The robots will scale with you, meaning that while you may run into low level raiders giving 7 XP and not really contributing much, you can fight robots that give 40-80+ instead, along with the completion bonus being awarded instantly. 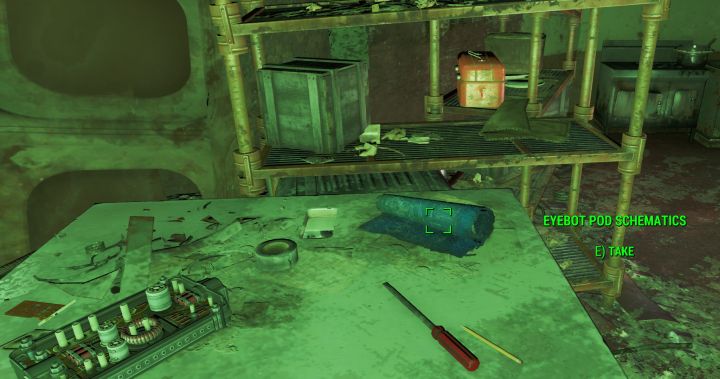 The Eyebot Pod Schematics are in Isabel's bedroom

Eyebot Schematics
After completing the quest and talking to Ada and/or the Mechanist, you should have all robot schematics and be able to make more advanced things, though you may still need Perks. One thing that could be overlooked is in the Mechanist's bedroom, along with a drawing of the mechanist on another table. The Eyebot Pod Schematics will let you make your own little eyebots, though they cannot be followers. You can only build them in Outdoor Settlements. 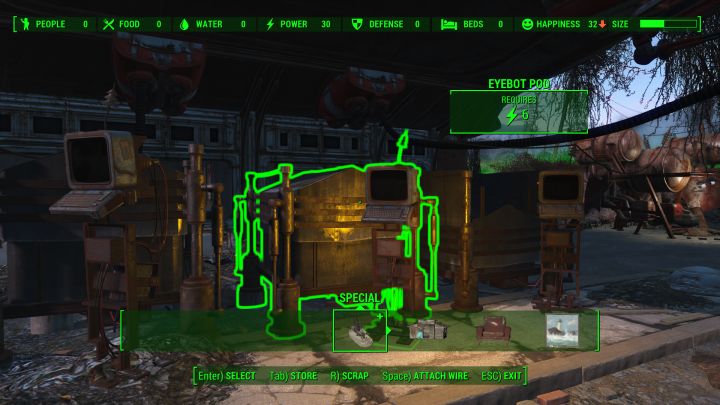 Eyebot Pods require power, but each will house one Eyebot which can be sent to locate materials, ammo, and explosives for you.

The way this works is, you go to an outdoor Settlement and can go to the Special menu in workshop mode. This lets you create the Eyebot Docking Station (takes 6 Power), which will control one Eyebot each. These little guys can be sent to search for items from one of three categories: ammo, explosives, or components. Most of the ones you'd want to be listed under components, like fiber optics and nuclear material, will be found there. Mini nukes are under ammo as they should be, and explosives include things like baseball grenades and cryo mines. 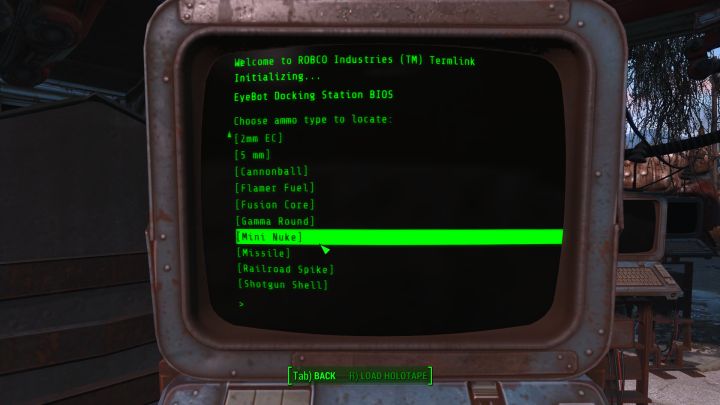 Pods must be built in outdoor Settlements, and you cannot have two Eyebots looking for the same thing (or so it seems).

Once the Eyebot is sent out to find it, you'll get a Quest under the Miscellaneous category 'Wait for Eyebot to find X' (whatever you sent it to find). When it finds it, you'll be notified then can use fast travel to get the item. Some players report some silly occurrences, but overall it adds one more thing to do and you'll likely be sent to uncleared areas - so therefore this can be used to get you to where the action is, and will lead to new discoveries. Overall, good stuff. If you don't like where the Eyebot has found it, say in the Glowing Sea or something, you can go to the terminal and recall the Eyebot.

The Eyebot station will have a red light when it's active. As stated, you can recall it or wait it out. I wasn't able to get two eyebots to look for the same object, so you should consider how many of these you really need. I went with 3 to start. You will be notified when to collect eyebot finds after game-time passes, not real time.

Panamajerky
Other schematics? Such as spotlight and maybe more. Also include the models, I love collecting those. I'm talking about the Sentry Bot and the ones with mangled up pieces. Fun fact, they all have Fallout 3 and New Vegas meshes and textures.

5
Carl
I think I found four of them at least, was not sure how many there are in total. They do deserve a mention given how unique and great-looking they are as decorations.

2
Don't Know
I don't know how it worked for you, but I never got a spawning point, and had to redo that last fight 3 times before it would complete! Making my way though these new building is a nightmare, and trying to get back to this "settlement" is a total bite!

1
Carl
I'd heard of the fight being buggy, but not anyone have difficulty in fast traveling there. As soon as I'd taken control via the workshop I was good to go, but I did the quest in a very standard way on my main file. It doesn't surprise me it can glitch given it's one of the only situations in the game that you can approach various ways. That in itself offers more opportunity for a bug to pop up. I looked through the Bethesda forums and see a lot of people complaining about similar issues, so hopefully it makes it out in a patch very soon.

2
Chris
Ada killed Isabel before I had a chance to talk with her so the lair is just a cold dark empty she'll emerge I make other boys to take our on the road with me.

4
Chris
Dear God the typos. Ada killed Isabel before I could talk with her so the lair is just a cold empty shell used to make other bots I take it on the road with me. Thanks Samsung.

1
John III
I remember finding a single bed in the containment area with the cells, although it's a shabby ol' mattress.

2
Josh
The second-to-last cell on the left has a usable bed. Also, if you've found the three voice log holotapes, you can backtrack all the way to the entrance with the laser arches and use the elevator terminal in the security room next to the laser hallway. Play each tape in the elevator terminal to override the lockdown and take the elevator down directly into the Mechanist's control room. This will allow you to talk them down and skip the difficult fight!

1
Pat
Upon discovering the Mechanist, SPOILER: She used a Stealth Boy and disappeared. So I blasted the wavy "air" and took her out. Who had a chance to talk? I actually felt bad about killing her. I got the idea from the holotapes and computer logs that the Mechanist wasn’t evil.