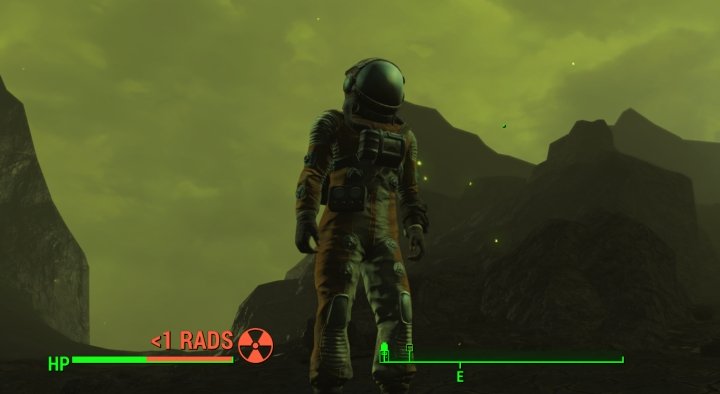 A character in the Glowing Sea wearing a Hazmat Suit. Dangerous enemies are here - Power Armor or many doses of Rad-X would be a better choice.

Radiation works differently in Fallout 4 and is more dangerous to your character. This Guide describes its effects, how you can expect to combat it, and what you should do to keep your character healthy. We'll look at how effective Rad-X is, getting through the Glowing Sea safely, and how radiation resistance works.

Radiation comes from toxic barrels, gas, enemy attacks, and the occasional radiation storms in Fallout 4 - particularly when there is a lightning strike, it spikes and deals more damage to your character. Having a gas mask to wear during these is recommended. Some areas, like the Glowing Sea, are highly irradiated and deadly without ample resistance well into the 100s - else you use loads of Rad-X and wear your best protection and prepare to use RadAway and Stimpaks to heal yourself.

Radiation storms, being in water, enemy attacks and eating contaminated foods all show you taking Rads, which reduce your max health by a percentage.

Radiation in Fallout 4 reduces your character's maximum health. Your Pip-boy has a built-in Geiger counter and can tell you how much Radiation you're taking. It's either a steady amount - as with water/rad storm exposure, or single large doses in a moment's time, as with certain attacks from creatures.

When you see 10 Rads while in water, it means that you are taking 10 Radiation per second. Every character, regardless of their max life, can take 1000 rads before succumbing to its effects. Every 10 rads is 1% of your maximum health gone, so 2 health for a 200 health character. Eating foods with Radiation in them will give you exactly the amount stated, so overeating these foods is not good. I tend to use those to make extra caps. The denizens of the wasteland do not seem to mind the pork and beans, but I'd prefer to live off of purified water from excess at my Settlements. And, of course, Stimpaks.

Rad-X lasts 3 minutes and reduces Radiation Damage taken by increasing Resistance by 100 per dose - they do stack!

Removing Radiation Effects
Certain foods, like Mutant Hound Chops show a negative Radiation upon eating them - only cooked! Most cooked foods and purified water are safe, but these and a few others are special. The main means of removing Radiation is RadAway, which will take off 300. More with the Medic Perk, which takes off -400, -600, -800 and then 100% of Radiation per use. Visiting a Doctor, you can also remove Rads. Going to Diamond City, you can find one, as well as a traveling Doctor who will show up at various Settlements throughout the Commonwealth. The implication of the health effects of Radiation is that once the Rads are removed, you need to heal up the missing health once the rads are cured.

So, we have Radiation damage being done to our character. The more radiation coming in, the more important radiation resistance gets - but large amounts of radiation resistance will still leave you taking a little bit You'll see < 1 (less than 1/second). Using a +100 Radiation Resistance Rad-X takes a 10 Rad/sec water exposure to 2, but a gas mask with only 15 Radiation Resistance will bring it to 4. Use both, and you're still at 2 - you've gone from 100 to 115, not a large jump. You'd probably need 200 to see 1 rad/sec. This is because the complex formula that determines the amount of damage you take of any kind results in smaller numbers being harder to diminish (weak attacks still hurt, a little), while big attacks can have lots of damage removed. I know not many readers will be math-savvy so this is a simple explanation.

Ways to Get Radiation Resistance in Fallout 4 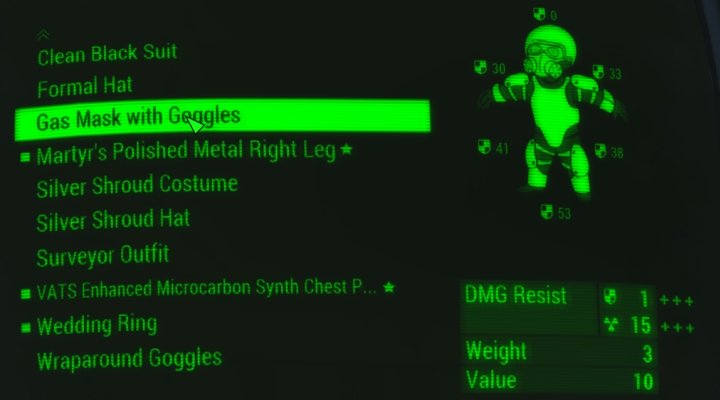 You can see the 15 Rad resist on the gas mask here - look for that symbol to see the resistance you'll get from an item. Carrying around a gas mask is a good way to save yourself from light Rads. It'll take 10 down to 4, but won't have a large effect on hundreds of radiation coming in - that's where Power Armor, Hazmat Suits and Rad-X come into play.

Rad Resistance comes in a variety of forms in Fallout 4. Many of us choose not to walk about in Power Armor all the time, so having some source of rad protection is a good idea.

Using Radiation in your Favor

This makes your Radiation Damage gradually heal health. If you took 10 Rads at rank 1, you'd heal 1/2 a percent of health. At rank 3, 10 rads would heal 1.5%. This doesn't stop you from taking Radiation Damage entirely, it means you will need less healing items when you're in a fight and radiation is harming you along with enemies - or after one. Once you've got some healing, use a Rad-Away to recover more health.

Getting to maximum affinity with Hancock (a companion) will give your Character the Isodoped Perk permanently. This makes your Radiation work for you! It gives a whopping +20% faster Critical Meter fill when you're at 250 Rads or more (25% of your bar turned red). Since you're in control of this and can keep Rads around that level, it's a great Perk for characters with enough health to sacrifice some of it!

Contact
I hope you found this guide helpful. If you think I've missed something, please email [email protected] with a suggestion.

Hans Meier
"Atoms Devoted Robe" (or similar) gives at max 2563 rad resistance. the more rads you have, the more restistance. i play a build that constantly maintains 75+% radiation and this comes in handy. 2 weight less than the hazman suit and can get the ballistic fiber mod.