The Bottling Plant back entrance. The front is a tunnel in a river of nuka-quantum (supposedly, it's just irradiated water)

The Nuka Cola Bottling Plant is a hazardous area that's been overrun by Nukalurks - more powerful, re-skinned Mirelurks. There's even a NukaQueen at the plant to contend with. Your reward will be one more claimed area for your raider factions and a Nuka Cola Power Armor. The Nuka Bottling Plant lies to the north of Kiddie Kingdom. Just go around it along the western wall to reach the area. Because of the difficulty, I don't recommend you do this first - but if your level is high it should be OK. Even at level 50 some of the monsters showed skulls for me, indicating their level was significantly higher than mine. 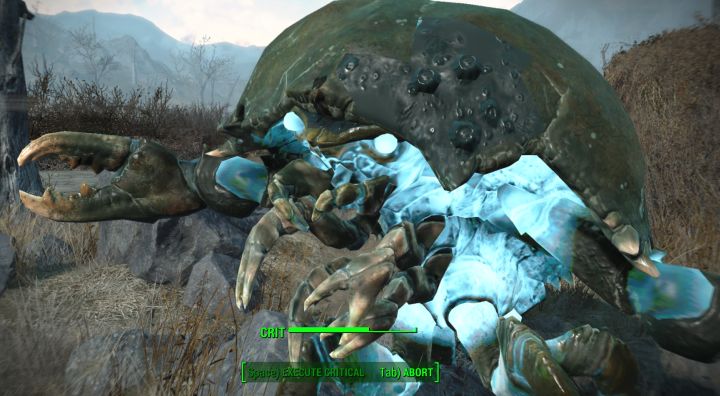 Nukalurks are a new addition in Nuka World, they're a bit stronger than their regular Mirelurk counterparts.

A Choice: Front or Back 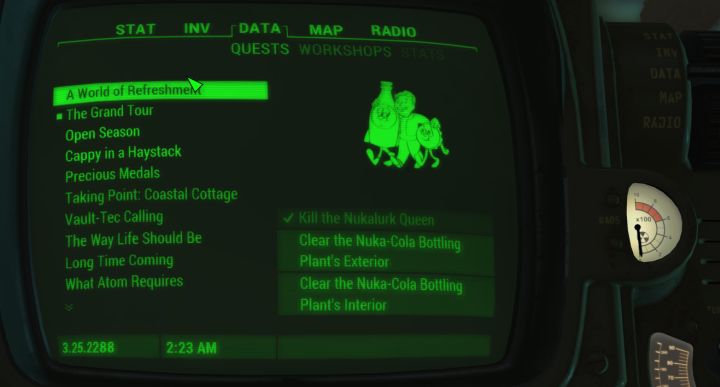 A World of Refreshment!

Going with the front first, you'll come out on top of Nuka World and can snipe the Nukalurk Queen you'll have to kill in order to finish this quest, though I did not do this. I started the opposite way - back then through the front 'door' (a tunnel in a river). I didn't find the Nukalurk queen very challenging and my hit chances would've been very low much farther away. I'd have to fire manually, and I prefer VATS. I also liked the idea that the hardest part would be out of the way!

Starting with The Back: Clearing Nukalurks 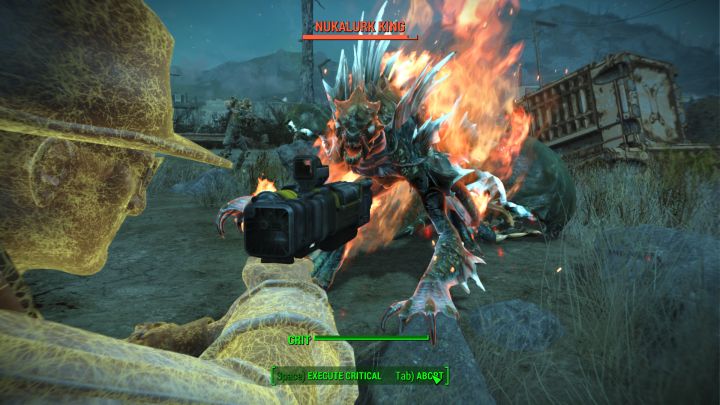 Nukalurk Kings spit acid and are quite fast opponents, definitely more dangerous than a mirelurk

The Bottling Plant has to be cleared both outside and in for you to claim this for one of the raider factions. Because of the difficult battle you face outside, I suggest you do that first. You'll also be in a better position to fight the handful of Nukalurks, Nukalurk Kings, and Nukalurk Queen.

The regular nukalurks should come at you first, then kings which spit highly damaging acid and are far faster. Assuming you shoot from the back gate and pull them one at a time, the fighting should not be overwhelming. When the Queen comes up, she shouldn't enrage on you right away, giving you time to deal with the others before beginning the process of taking her out. She's so big that she's stuck in the pool and can't fit through the small hole in the bushes at the back of the plant.

Because these are quite damaging enemies, I suggest you try not to draw too many to you at once. Sniping helps, as do long range heavy weapons like the missile launcher and fat man. Use your crits to get them in the head.

The Nukalurk Queen's size limits her mobility, but she spits acid that will kill you quickly on high difficulty.

I love VATS, so once the others were cleared off I used it to shoot the Queen's spouts every time I could score a critical hit. The hit percentage on those is just so low it's almost necessary. Doing this will make her spray far, far less acid. It's usually in a spread pattern, but becomes more like a king's single shot and is a bit easier to avoid. The acid erodes your health rather quickly, and stimpaks will be needed each time you're hit without power armor.

The Nukalurk Queen is killed.

With her stuck in the pool, and you having the ability to take cover and heal, this should not be an impossible fight. Whittle her down, or eviscerate her if you're one of those players with an awesome exploding minigun or using a weapon like the Problem Solver that builds up damage on a target.

When the fight is over, head around to the front of the facility, A World of Refreshment. You need to do this in order to secure this for a gang. Because the distance is short and that you've already checked the outside off your list, you can actually travel back to town if necessary and heal up/get supplies and ammo for tackling the inside. This is a second benefit to starting with the outside first.

Clearing the Bottling Facility (Inside) 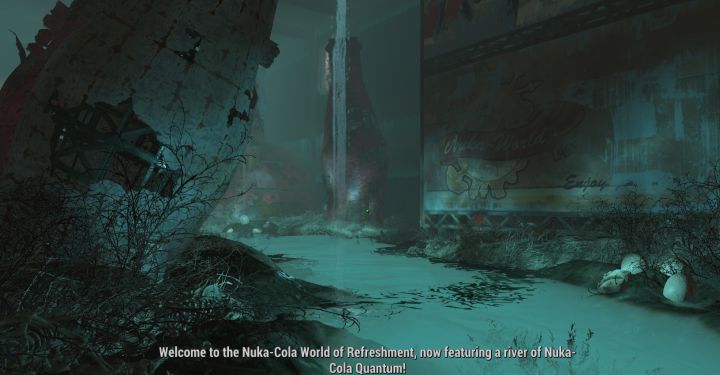 The World of Refreshment is a tour

Follow the river of Nuka Cola Quantum, enjoy the weird announcements and history of the great Nuka Cola! You'll stick to that path for the most part! There will be plenty of Nukalurk spawn to one-shot and build your crit meter upon. I think things like that are more annoying when playing Fallout 4 shooter-style, though most of us do a bit of each. With Nukalurks, VATS helps as you get the huge damage reduction while your moves are executing and it's easier to score multiple head shots.

Behind the Bradberton chemistry display there's an Expert-locked door that can be used to gain a couple sniping advantages against the Nukalurks. There are hunters here, and it's a tight corridor without much room to maneuver, so it's not an awful idea. However be aware it's easy to get cornered by the mirelurks coming out. I found it easier to stay on the path until the end.

Four Assaultrons guarded the computer lab, which was necessary to clear this area.

When you get to the end, be wary of the hole in the wall beside the locked security door with Nuka Cola Power Armor behind it. It leads to a security area where I found a whopping 4 Assaultrons, all at once! Bethesda really wanted to challenge us with this DLC.

As you explore, you'll find a few things - the employee maintenance area is just one. There are also two other items of interest: 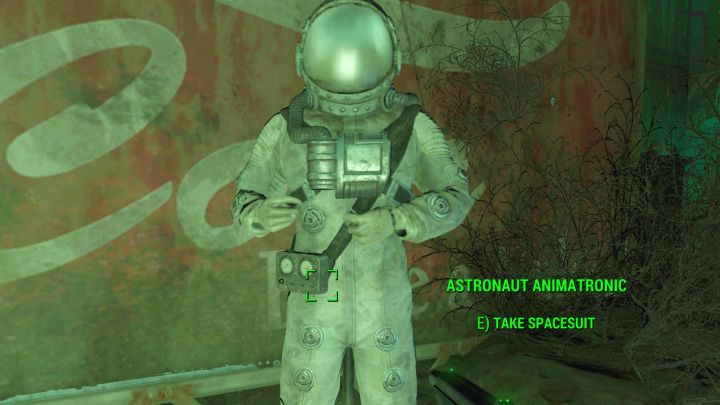 The astronaut suit toward the end is likely used in a quest for the Hubologists. Always look for Star Cores throughout your adventures in Nuka World. Collecting 35 of them unlocks something special.

Spacesuit
This may be required for another quest. You'll be stuck carrying it, but it is indeed a good quest to follow.

The Nuka Cola Power Armor set, fully charged and ready to go - as soon as you can open the door. If you can't unlock an expert-level terminal, you can find the password on the roof.

Nuka Cola Power Armor
Yep, a full outfit of leveled Power Armor painted in a Nuka Cola theme can be found here. Just defeat the Assaultrons toward the end of this area and go into the computer room they were guarding. Look for an expert-level terminal you can hack in the room with loads of computers. If you cannot hack that, fear not. Up on the roof, inside one of the structures you'll find Casey's password on a cabinet along with a note. With a little backtracking, you can get the Nuka Cola Power Armor. What does the Nuka Cola paint job do? It adds +3 Agility to your character when you wear the full set!

Claim Territory for a Raider Faction

The Nuka Cola Bottling plant must be given to one of the raider factions. Who will you choose? See my guide to faction perks to help decide. You should pick two factions as your favorites. It's the best strategy.

There may be a couple stragglers outside, or you did the inside first and now face a Nukalurk Queen. Either way, when you're done, you're ready to hoist the flag for one of the factions. You'll find it on a tall tower on the roof, atop a red Nuka Cola bottle. You use a yellow lift platform with a button to get up there and back down: it's quite high. Congratulations, the World of Refreshment quest is completed and your raiders now control the bottling plant.