Walkthrough: Walk in the Park, the Fog & Longfellow 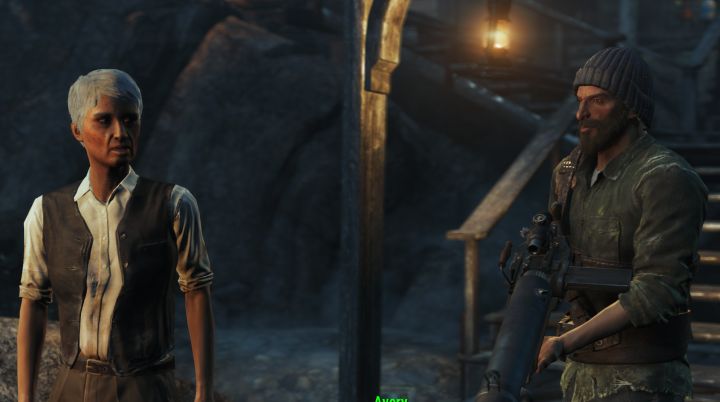 Captain Avery helps you in your hunt for Kasumi, but first you must protect the gate. Fog Condensers push back the fog.

After getting started and finishing Far From Home you will get to Far Harbor. Upon arriving here, you'll probably realize this is a place with problems, like most of the Commonwealth. Speak with the Captain, and you'll be interrupted by an attack. The residents of Far Harbor are protected by a wall known as, 'The Hull'. Head up the stairs to this wall, and notice the generators, "Fog Condensers" holding back the fog. A sight that is quite creepy, but very intriguing. 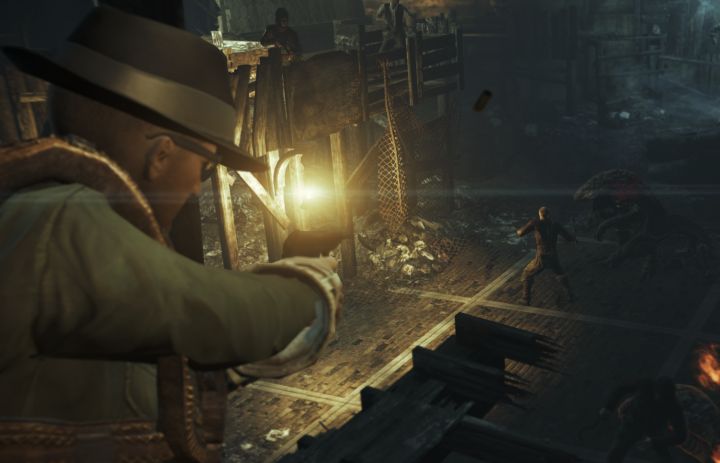 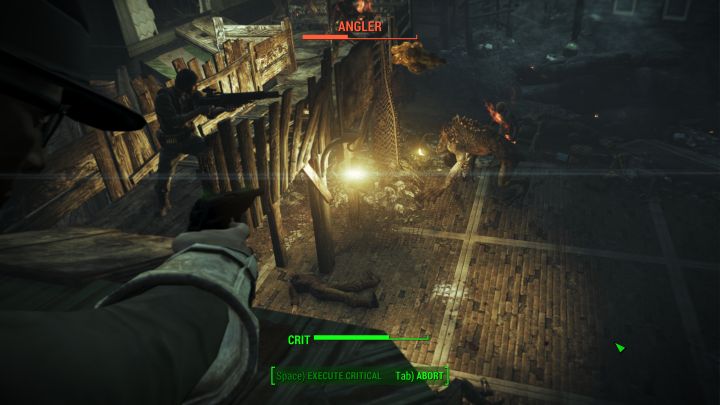 The gate attack is easy, so long as you don't fall off the wall known as 'The Hull'. NPC grenades are more likely to kill you than creatures, however. Anglers are touch enemies, but you've got a lot of help.

You will quickly be introduced to some of the new fauna of this island. Gulpers, radroaches, and Anglers will all attack in force and are quite durable. Though the villagers are very good at protecting themselves, you can pick up some easy experience and possibly a couple of legendary items by picking off weak enemies. Be sure to head and loot the corpses right away, just in case. I was unable to find the bodies of two legendaries I was sure to kill.

You can now speak to the Captain again, and learn of the trouble the Fog creates for the inhabitants of Far Harbor, though I'll leave those details to you. Allen presents that the Children of Atom, who worship Radiation, are behind the spread of the fog and need to be killed. But you're on a mission to save Kasumi and are directed to the Synth Settlement of Acadia. You can elect not to utilize Old Longfellow as a guide, but it's not a wise decision if you enjoy good dialog and lore - not to mention another hand in combat. I highly recommend you bring him, as he presents plenty of lore about the island. 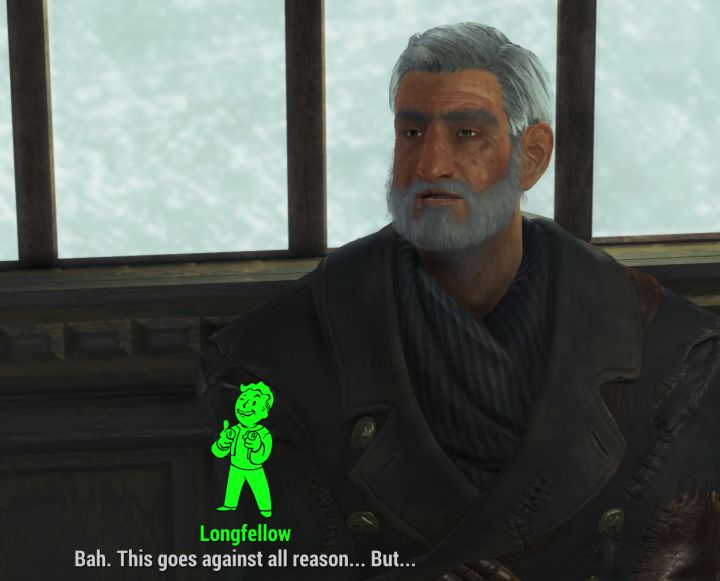 Choosing Longfellow as a guide gives you more lore, as opposed to a silent trek to the Synth Settlement of Acadia. He's not bad with a gun, so he's a great help.

Additionally, Longfellow is a potential companion and can be taken back to the Commonwealth. He even comes with a special Hunter's Wisdom Perk for maxing affinity with him reducing damage resistance and energy resistance of animals and sea creatures by 25%. Longfellow's is one of the better Companion Perks in Fallout 4.

The Captain indicates several villagers around town need help. This is an indication of some side quests, and very welcome ones at that. You'll get one right away 'Living on the Edge' to help the inhabitants, notably the Mariner and Cassie. It's clear there's plenty to do around this island. 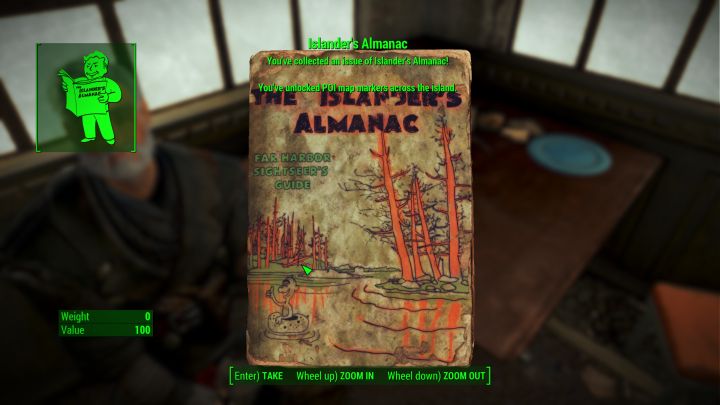 Old Longfellow is located in the town bar, The Last Plank. Next to him is one of five Islander's Almanac magazines that can be found on the island and offer various perks. This one, "Far Harbor Sightseeing Guide" will populate your map with some points of interest. Speak with Longfellow, who insists he's done taking people to their death in The Fog. Should you wish to bribe him, his (sad) price is a fifth of whiskey from the bartender. Mentioning Kasumi, you can potentially pass some speech checks and convince him to guide you through the Fog.

Longfellow suggests you stock up on ammo and Rad-X. You can talk to him whenever you're ready to leave Far Harbor for Acadia in search of Kasumi. Before doing that, you should consider his words and check the shops if you are low on supplies. They may have some interesting purchases for you. If you'd like to ensure you're ready, tell Longfellow you need some time to prepare. 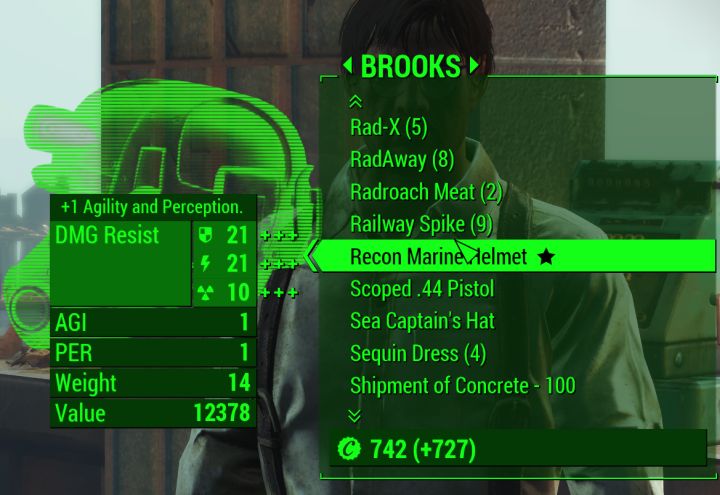 This (great) helmet can be modified to be even better, but it's super pricey. Thankfully, a harpoon is much cheaper and multiple NPCs sell Harpoon ammo. You can also find new ammo for the Lever Action Rifle.

Looking around Far Harbor
There's a shop run by Allen near to the entrance, where you can find both an armor and weapon workbench, with Power Armor station inside. He sells two unique weapons - a meat hook with reduced AP cost for VATS, and a powerful Harpoon that deals more damage when the target is at full health. Both of these are reasonably priced. Next door, another merchant sells a very pricey (10k+ caps) Recon Marine Armor Helmet with Agility and Perception. It's unmodified so could be made to be very potent defense if you can afford it. Both these merchants sell .45-70 ammo for the Lever Action Rifles. You can buy and modify one now assuming you have enough materials in your inventory.

There are a few Side Quests to do, all tied to the one the Captain gives you to help the citizens. One can only assume there's a decent reward for completing all of them.

Getting Quests
You should collect the side quests from Cassie and The Mariner before you go. Also, check on the patient in the hospital if you have 8 INT and/or 2 Medic Perk and can potentially cure him. You can do these now if you choose, or else continue with the Quest and resume with Longfellow at the bar. 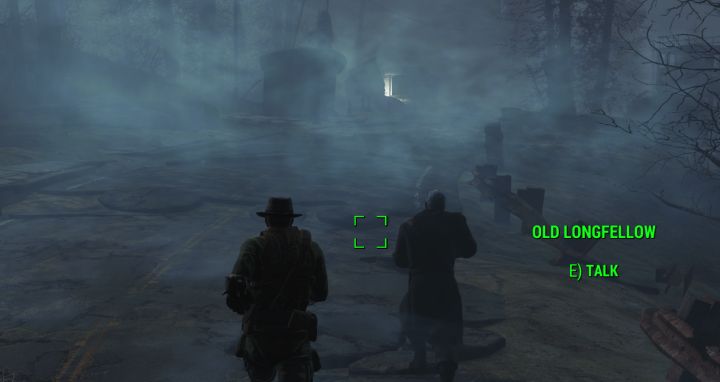 The Fog isn't super deadly, but it's not completely safe either. Denser fog = harder enemies, and more rads. Fog tends to be thicker at lower elevations.

The Fog & Heading to Acadia
Return to Longfellow when you're ready, or else go yourself if you turned down the guide. The Fog is not as bad as it seems. Its effects can be reduced greatly with Rad-X which lasts about 8 minutes, and the fog is not as strong in all areas - particularly at higher elevations, which makes sense. If you have at least 40 Rad Resist you can get the effect down to less than 1 Rad/sec, and RadAway can take care of about 500-600 seconds of radiation at such levels. So you'll lose some supplies to it if you're not wearing Power Armor, but the Fog is not that bad for short trips nor does this require Power Armor at all, though I'd suggest it on Very Hard and Survival Difficulty depending on your build.

Keep an eye out for Blight. It's likely used to craft food or with the chemistry station.

Along the way, several ambushes will occur, but with Nick (hopefully) and Longfellow watching your back it's much easier. Longfellow likes to use grenades, so do be wary. You'll learn of the Trappers, wolves, and Gulpers directly through combat, along with a couple batches of ghouls. If you're playing on hard+, it's a prime chance to potentially encounter a few legendary enemies and get their drops. 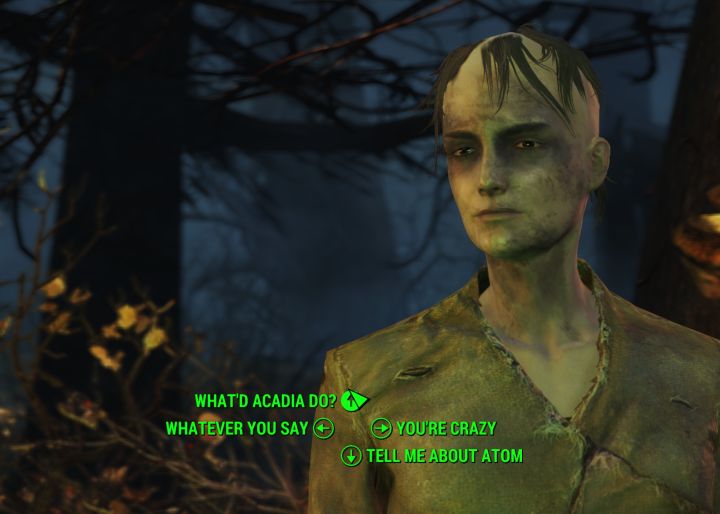 She asks you to join the Children of Atom. Keep your options open! It's easier to backstab them later, anyway.

A Child of Atom will greet you as you continue toward Acadia, where you can learn of their beliefs and the Nucleus. Listen, and consider to join - you can leave your options open. I opted not to kill the fanatic in case it would affect my opportunities later, and suggest most players should do the same. Just in case. 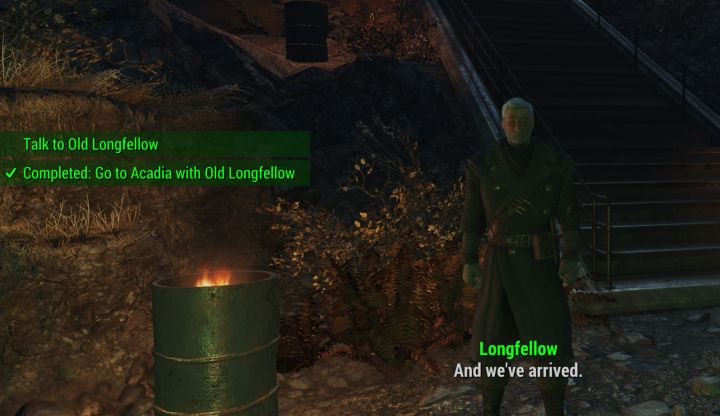 You've reached Acadia the Synth Refuge with Longfellow. Now he'll let you use his Cabin Workshop. Fix it up, but bring booze.

At this point, you will reach Acadia. Your reward is a gob of XP, and Longfellow will allow you to use his Cabin as a workshop. The 'Where You Belong' Quest to enter Acadia and meet DiMA now begins. I'll resume coverage soon and link the next here, along with where to find more magazines.