Stat Benefits and Making Use of STR Perks 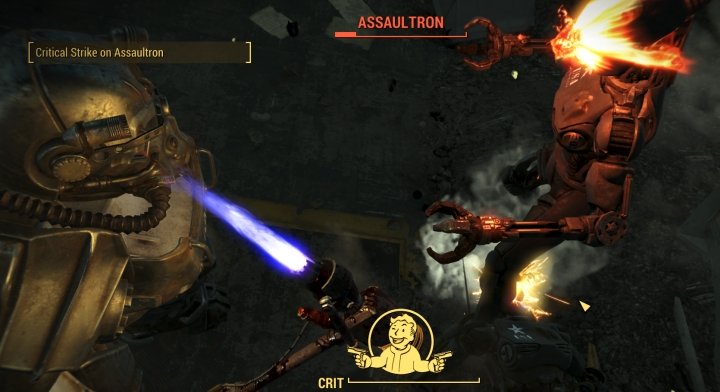 Wielding a Super Sledge is a blast. Rocket-assisted assault requires a little Strength and investment in Melee Perks to be truly effective, but Melee builds are highly competitive with ranged in terms of Damage so long as you get some key Perks.

This guide will list all Strength Perks, assess their usefulness and if they're worth a point or two. Additionally, we'll look at the simple things the stat itself does for your character and why most will want at least a little strength by the time they're later in the game. 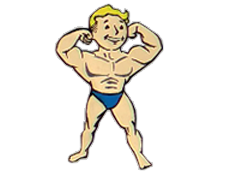 Jump to a Strength Perk! - Just need the Perk ID to cheat, or want to know more about one of the Strength Perks? Click to jump to info about that perk:

Carry Weight
Each point of strength adds +10 Carry Weight, which lets you haul around more junk. If this is the main reason you're after strength, you might want to at least go in 6 points to get Pack Mule. Players who like using automatic weapons may want 7, which will let them use Steady Aim, a Perk that boosts hip fire accuracy.

Melee Damage
Melee damage gets boosted by 10% for each point in Strength. Of all the stats, it is the one that seems to have the biggest impact on a character build. Melee builds will absolutely want to cap this stat, but will need to choose between Big Leagues and Iron Fist as far as the type of weapon they're adept with. Later on, you can master both, of course.

This is the list of all Strength Perks in Fallout 4. Every perk starts with a minimum SPECIAL rank, which does not go up with future points in the perk - only the level requirement changes. You will find the Perk ID for the player.addperk cheat, as well. This is useful in order to avoid leveling your character to get perk points, or to remove perks and respec your build with the player.removeperk cheat. In case I've made a typo in any of these, you can find any Perk ID in the cheat menu by typing help perkname 0 - for perks with multiple words, try only one word in the perk name. Expect to see them listed without ranks. You can omit the 00s when using these cheats - start with the first non-zero character to save yourself some typing.

About Iron Fist: First, to answer what will likely be questioned by many - do you have to truly be unarmed? No. Power fists, Deathclaw Gauntlet, and knuckles get boosted THIS Perk and NOT Big Leagues. So that's an important distinction to be made. Use common sense to realize if something is meant to be used with a punch, and you'll probably be right about which Perk it gets boosted by - the damage numbers found in your inventory menu DO reflect this Perk. If you max out this Perk, you will severely limit your choice of weapon to these types of weapons. Is that necessarily bad? That's up to you. You can certainly reach high damage numbers with this Perk and benefit every bit as much as if you'd gone with other types of weapons under the Melee classification. The chance to disarm is 10% for Rank 2, 1% to cripple at rank 3. The chance to disarm rises to 15% at rank 4+.

You cannot use unarmed weapons in Power Armor, but Power Armor punch attacks are roughly equivalent to a Power Fist in terms of damage. You can also mod Power Armor's arm pieces to increase unarmed damage, add bleed effects, or energy damage. This saves this Perk from being nearly useless, because if Power Armor punches were too weak, it'd be pointless for players who enjoy wearing the bulky combat suits. 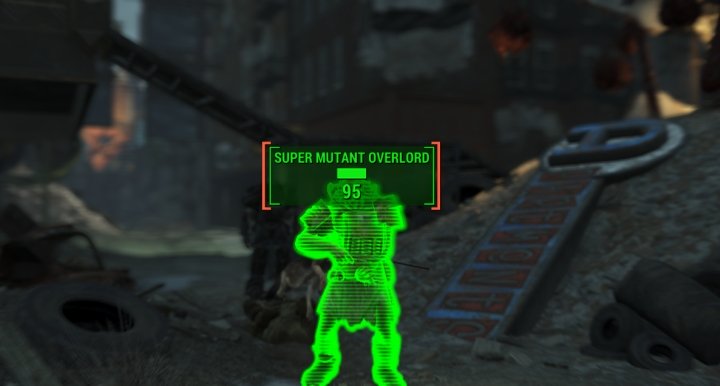 Blitz couples very well with Big Leagues and Iron Fist. You can use VATS at huge distances, which means you can instantly close the gap and avoid having to take damage on the way toward ranged opponents.

About Big Leagues: This affects all other types of Melee weapon and won't boost the 'unarmed' style (ie punch) weapons. Melee is very Viable in Fallout 4, but mainly with the Blitz Perk found under the Agility category. This allows you to zip around rooms hitting targets from a much higher distance, which means you won't take damage going from target to target. On Hard and below, you don't necessarily need this advantage to survive, it's just a nice one.

About Armorer: A necessity at high level if you play on Hard or above. Players can certainly avoid using this, but it's very nice being able to add mods like Pocketed, Lead-Lined, Ultralight build, while also boosting the damage and energy resistance of your armor. The cumulative effects of these boosts are huge. You can live without it for a time, probably into the 20s, but you will want it later so as to mod your armor and not just rely on what the game gives you. This is required for anything from helmets to chest pieces and Power Armor.

About Blacksmith: This is a very intelligent and obvious choice if you're going with either Big Leagues or Iron Fist and making a Melee build. The damage boosts play off the weapon's modded damage, so you'll get even more mileage out of melee weapon upgrades. At rank 5 Big Leagues, the upgrade damage amount would be doubled, for example. Melee weapons suffer in that there isn't a lot you can do to customize them, but you can definitely hit high damage numbers with Blacksmith and Big Leagues. As for players relying on what the game gives them, it's worth nothing this is probably less important than Armorer just because nearly all melee weapons can only get one modification made to them.

About Heavy Gunner: If you like Flamers, Fat Men, Gatling Guns, or Gatling Lasers, and want to use them primarily, this is the Perk for you! It's worth noting that Fat Men also benefit from the Perception Perk, 'Demolition Expert', so they can get even larger bonuses to explosion damage and an increased blast radius. Take this with Steady Aim if you like hip-firing weapons, as it will greatly affect the accuracy of your Big Guns. If you like VATS, you should probably go another route with your build. Because heavy guns can fire so fast, the chance to stagger is low - like 1.5% per bullet at rank 4+, but you know how fast a minigun can fire! Note that big opponents like Deathclaws and Supermutant Behemoths cannot be staggered, but humanoids can get stun-locked with a fast-firing weapon pounding them.

About Strong Back: Ranks 1 and 2 are a necessity at some point in the game, at least in my humble opinion. It works out very well by allowing you to carry more weapons for different situations, or more junk to craft items and structures in your Settlements. Rank 3 is not as useful at first, as the game pauses to let you sort out your inventory and you should drop junk to allow yourself to fast travel. There's no point to it until the 4th rank, which is going to allow you to use Rank 3 better - get outside without walking super slow and then head to the base where you can offload your loot.

About Steady Aim: This works out well for players who like automatic weapons and prefer not to use VATS and Action Points. If you want to play Fallout 4 like a straight up shooter, you'll enjoy this Perk's effect in combination with that of Commando or Heavy Gunner.

About Basher: Sorry Bethesda, this Perk is broken. It's far too weak compared to just swapping in a melee weapon and properly bashing someone. The only way to boost damage is to put a bayonet on your weapon, and they are fairly weak in terms of additional damage. This Perk also does not benefit from any melee damage boosts. Some players may take this one for fun and be able to decimate lower-level enemies, but I'm all about growing powerful against the strong ones and will save this for much much later. Attaching bayonets to weapons reduces accuracy, and I enjoy ranged builds.

About Rooted: This is a great Perk for Melee OR Ranged. With just 2 points, you're getting 50 Damage and Energy Resistance. The description is a bit off and doesn't make you realize you're getting both. The thing about Rooted is, it kicks in right away when you stop - immediately and so long as you're not charging an opponent or using a sprinting power attack, you can benefit from this. You don't even need to stop briefly to benefit, because when you are mid-swing in any attack that doesn't involve sprinting, you're getting the bonus. It is outstanding with heavy gunner, gunslinger, or a melee build. While you're standing in one spot and hacking at targets, you're taking less damage from their friends. Now that I've researched this Perk, I'm taking it on my main (who does not use Power Armor). That's way more resistance in one point than you get from those that boost Damage/Energy flatly (10 per point, and only one type!).

Melee users will especially like this, because just like the damage resistance, it kicks in immediately on stopping. The damage boost is multiplicative, as far as I can tell (for the mathematically challenged that is a good thing). It bases the damage off the weapon's stats including Big Leagues or Iron Fist. 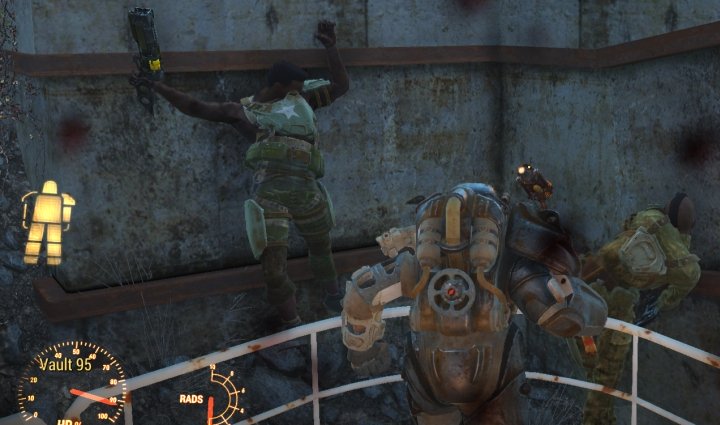 Pain Train is a very fun - and powerful - Perk in fallout 4. The damage is huge against opponents that are not immune to the stagger.

About Pain Train: So only the largest of opponents and robots will not be impacted by your stagger. This pairs exceptionally well with a high Agility or Endurance build - either one - because it will let you sprint that much more. If you've taken interest in this, you may also want Moving Target's third rank, because you'll get extra damage resistance while sprinting, and also have 50% slower AP drain from sprinting. I recommend it for a melee build. Once you're at your target and have knocked them down, you can easily lay into them with your super sledge. I tested this on some opponents, and found Supermutants are not immune (if you expected them to be as I did). Enemies that are immune to the stagger also seem immune to the damage, which is indeed large. It did about 3-4 hits worth of damage when compared to my 176 damage Super Sledge. Very nice!

Strength is primarily of use to Melee or Heavy Weapons builds, but the direction you'll go is based on how regularly you plan to use VATS. For those who want VATS, Perception and Agility pairs very well with Strength for the additional AP and amazing Blitz Perk. For those who will not use VATS very often, Endurance is a better secondary Stat so that you've got a bit more life in order to take the damage you need to in order to close distances and damage your opponents. Of course, the game also supports sneaky melee builds and even offers up the Ninja Perk which allows Melee users to deal up to 10x damage when sneaking. For any of these builds, you'll likely want just enough Intelligence to get the Science! Perk to go with Armorer and Blacksmith so that you can put the more advanced modifications on your weapons.