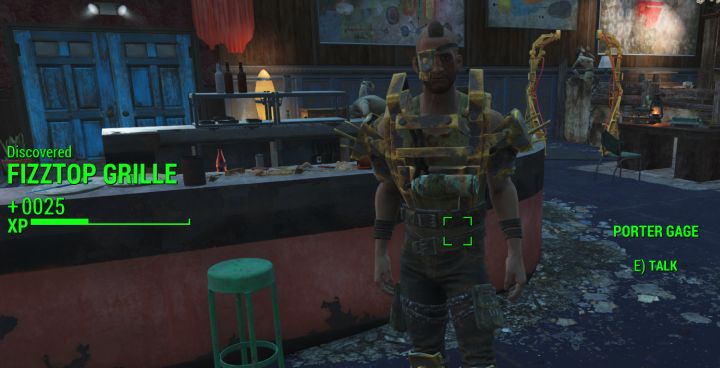 The An Ambitious Plan Quest involves you meeting the three faction leaders and getting them to accept your leadership.

While this quest is fairly straightforward, there are a few things you can do right away (as well as an unique weapon offered by one of the raider leaders) so I thought I'd point them out. Porter Gage doesn't want to be leaders. He likes to pull strings from the shadows, and Colter was a lazy twat who failed to do anything for the citizens of Nuka-World, meanwhile enjoying himself in his palace in the sky.

Your map should tell you exactly where to meet them, but you can only learn their particular tastes by passing a speech check with Gage (Any Advice? for how they'd respect me). The three factions like entirely different things, though at heart they are criminals. For future reference I've also listed where you can find these faction leaders, and also mentioned the location of the Nuka-World Market for a couple of reasons (you need a place to shop given the difficulty of the area) and a potential quest that could lead to a good ending. That is, if you pass up the golden opportunity the DLC presents in one true chance to be evil!

Mason, leader of The Pack. Below, The Problem Solver which can be attained through a speech check with him.

Leader(s): Mason
Location: Bradburton Amphitheater
Preferred Style: Dominance is the name of the game. The Pack are like wolves, feral, liking strength. In fact, this goes so far that if you speak dominantly to Mason during your first talk, you can earn a special weapon from him - The Problem Solver. I tried talking to the other leaders again and sticking to their style, but this faction was the only one to pass me a weapon from being impressed with my style. This was a red speech check (tell him he'll do as he's told), and it's possible you may get the same weapon later with a bit more work, but you can see the weapon above. I did see a similar one available from the Market (same legendary affix) so it's not 100% unique. Nisha, leader of the Disciples faction. They are your typical ruthless raiders, and their lair is appropriately dark. In hindsight I recommend a flashlight.

Leader(s): Nisha
Location: Fizztop Mountain
Preferred Style: The Disciples prefer bloodshed and violence. They are the typical type of Raider that you've met a thousand times before in the Commonwealth, though a bit more organized in their Settlement at Nuka-World. 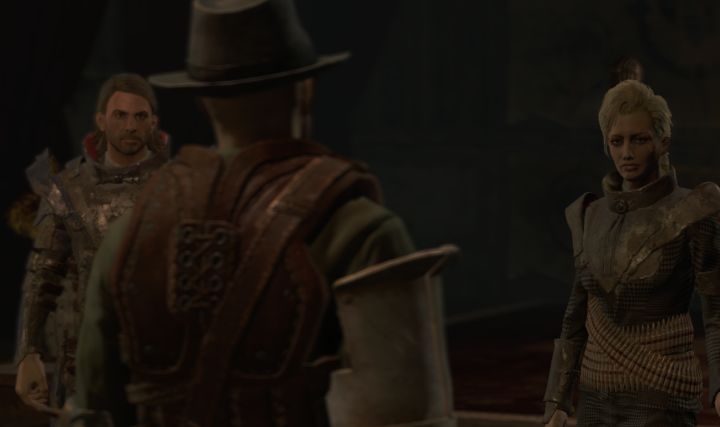 Mags and William Black, leaders of The Operators faction.

Leader(s): Mags and William Black
Location: The Parlor
Preferred Style: The Operators are all about stealth and money. They murder, they steal, but they prefer not to get caught and commit their crimes with style.

It's likely to unlock some benefits with each faction, and they may have unique weapons and armor available that are as yet unknown. Once you meet a faction leader, you can begin to take quests with that faction right away, regardless of finishing Gage's quest. The Market area (on the way to the Pack's headquarters) can be a great visit whether you have caps or not. Ammo, healing items, weapons, they have a bit of everything, though all the traders there are slaves. You'll find special smart grenades that do not harm the user, a unique knife that

Open Season Quest: It May Be Possible for a 'Good' Outcome 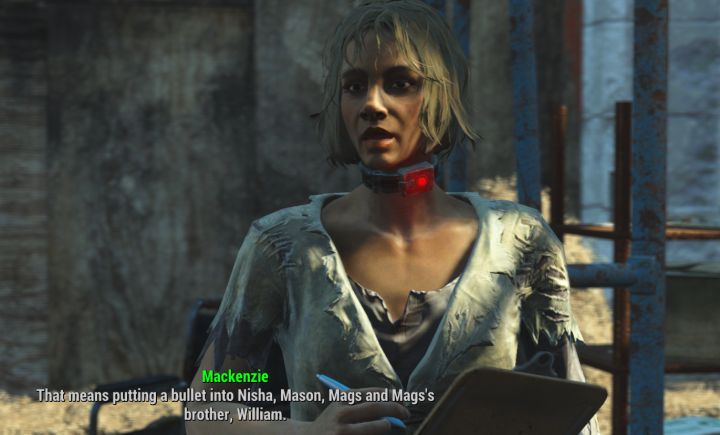 A good ending seems at least plausible, based upon the quest that Mackenzie will give you at the Nuka World Market.

Speaking to Mackenzie (the Doctor) at the Market in Nuka World, you can get a quest to kill all the faction leaders. Looking at the traders there, it's clear they're held against their will (they have deadly slave collars) and the raiders are not exactly model citizens, as one might expect. It's yet unknown the ramifications this would have. If you're interested, take the quest, sure! But consider working with factions for a time if only to milk them of their best loot before you consider taking on this quest. It'll clearly change things dramatically.

A Warning Before Finishing The Quest

Before you talk to Gage and turn in this quest, consider doing a few radiant quests from the faction leaders. The radiant quests become locked when you turn this one in to Gage, in which you'll be tasked to take over territory for the raider groups. For some reason their statement of, 'there'll always be work for you here' flies out the window when you're tasked with taking territory. I suppose they want you to get off your ass and take some land unlike Overboss Colter.

Take Over Territory for Factions

Gage will now join you as a companion (See his companion perk, likes and dislikes here), but Nuka World presents you with a dilemma. You're now instructed to take over territory, separate parks, but can only plant a flag and grant ownership to one gang each. It would seem there could be various outcomes, and you could certainly make one gang stronger than the others or start a war. It may be best to do some radiant quests, get to know the gangs, and those you like. Consider if you can maintain peace between the three, or off all three of them and do as Mackenzie suggests.

Previous: The Overboss: Boss Battle Guide
Next: You will get The Grand Tour Quest and can take over any area you like, but I recommend Kiddie Kingdom as a place to start claiming raider territory

Azrel Razgriz
Can you do the "Open Season" quest after the "Power Play" one? If you don't have unlocked Preston as a companion by not having completed the first Minuteman quest will he have a negative reaction to the Raiders' quests? Can you wipe out a Raider settlement that you have established to return it back to the Minuteman?

5
Carl
Yes you can on both. No negative reaction if you wipe out raiders before ever meeting him. Sorry I missed your comment but this may help other readers.