Take this staircase in the Children of Atom base to reach the old command center, guarded by robotic sentries.

Getting inside The Nucleus (Children of Atom Base)
Whether you've attacked the Children of Atom (bad idea) or joined them (good idea, as you can always do the former action later), you can go after DiMA's secrets at any time once you have access to the base. Aside from the puzzle you have to do, this is an awesome quest as it unlocks about 8 miscellaneous quests that will give you more information about DiMA, Far Harbor, and the Island. I'd advise you to be prepared to take on some strong, leveled robots including cloaking Assaultrons and Mr. Gutsy. Survival players: bring food and water in excess, in case you need to work on a certain puzzle for some time and come out of it nearly starving. 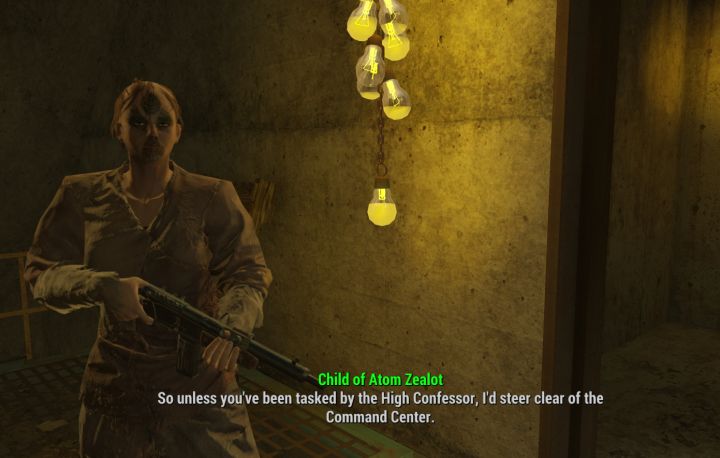 This Zealot doesn't seem to matter, no need to lie.

The Nucleus Command Center: Old Security, New Challenges
Access the Nucleus Command Center at the top of a long stairway in the back of the Children of Atom base. A zealot may caution you, but there's no need to lie to them. That may even cause you to be forced to talk to the High Confessor Tektus, who knows. Wanna leave those options open! 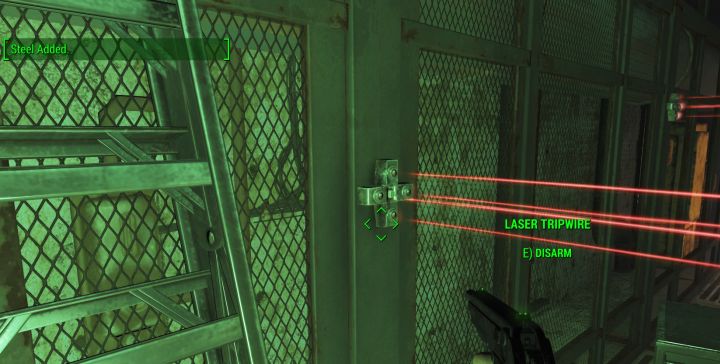 Press the interact button on these tripwires to disarm them and gain parts, skipping the fight with turrets. I prefer to kill the turrets for easy XP. Going that route, it's better to start further back.

Though it would seem you should be able to bypass the laser tripwires inside by using a door to the right, none of the switches work and there's only minor loot. Instead, just approach cautiously if you don't want to fight about 6 turrets. Disable the laser tripwires carefully if you're so inclined.

Past the first hallway, you'll face a Mr. Gutsy and another couple of turrets. Easy stuff, until the assaultron in such close quarters. Robotics experts will laugh at this, however. Overall, just proceed cautiously. For players who are on survival there are some bunks through a door to the left. There's an Ushanka hat (+1 INT) in a footlocker in the 2nd room.

Once you're up the stairs is when you need to look out for the first Assaultron. Destroy its fragile legs and it can't get to you. Do NOT shoot Assaultrons in the head, they take 1/3 damage but the limbs are comparably a joke. If it's a dominator or higher, hit vats QUICKLY whenever it decloaks to attack and blow a limb off. They can be the most challenging opponents in Fallout 4. 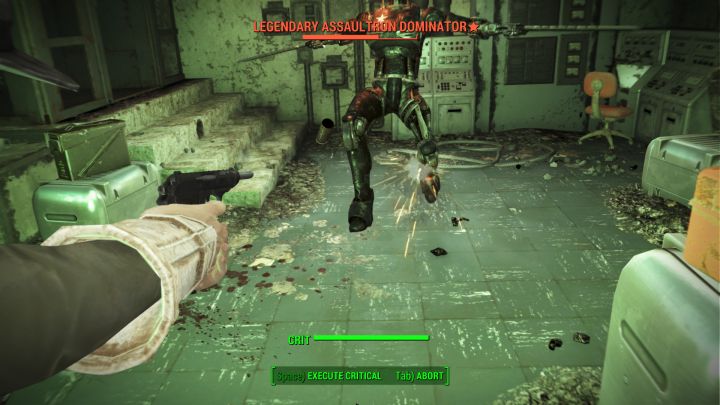 This Assaultron will spawn to the right as you leave the back room with the switch. Higher levels will face a cloaking Dominator, or worse.

Assaultron Dominator and Faraday's Program
In the room with the terminal that accepts Faraday's Program, prepare for a tough fight. It's not a bad idea to use a Med-X just before you throw the switch behind the security gate, on the back wall. Other drugs help a lot too, that one's just tame. This was perhaps the hardest fight I've had in Fallout 4 due to the tight quarters and my lack of Power Armor (by choice). When you power the terminal, a Legendary Assaultron will attack you. Go for the limbs in VATS when possible, or else blast it down quickly when it's cloaked if you're good at gunplay. Survival will have a fun time taking this guy out, but relieved there was a bed in this area. This one will definitely explode when defeated, so back off once you've secured your victory.

This will grant you DiMA's memories, but you first must unlock them, as well as gain access to the Children of Atom base at the Nucleus.

DiMA Memory Puzzles
When that horrid fight is over, you have access to the terminal and can use Faraday's Program to get inside. Now, it's time to do a rather tedious mini-game that many players get stuck on. I've got your back. Check for tips on level 3 and 4, and a full picture of how level 5 will look when complete.

Memories Unlock New Areas and Story
Your options for dealing with the story in Far Harbor evolve with each memory you gather. You need at least a few of them to properly deal with things, though even the first can vastly change things. I believe you can technically conclude the story with just the first two memories, but the others lead to greater rewards. So the further your progress, the more you learn about DiMA, but also may find some interesting locations and loot. Especially with the last two, so they're worth it on a first playthrough.

By the way, when you're done you can go out a different exit through a chained door. Look for a place on the platforms where you can drop down to the roof of a building within the nucleus to get out faster and without dropping to your death.

Check Miscellaneous Quests
You can listen to the holotapes again from your Pip-boy if you accidentally missed one. You'll find the quest to locate the Marine Armor there.

STRONG Suggestion
When you are done with these memory retrievals, do not go to faction leaders for a while, at least to settle things. Search for things and complete side quests for factions so that you can decide, morally, how you want things to end. Side quests give you more 'pull' with each of the factions. Additionally, there may be unique weapons and armor you want to buy from each faction, which you'll lose the ability to do if you wipe one of them out. I will write on the potential endings very soon.

Continuation of this Walkthrough
After the DiMA Puzzle, there is a page about The Wind Turbine, Nuke, and Captain Avery as well as an Endings Guide to help see you through.

Barry Derbyshire
Got the wind turbine but what do I do next?
Each memory item to be found has no reference in my pip boy under "Best left forgotten? Because of this there have been no map or compass markers to help locate the items and no options given as to what to do after finding, in this case, the wind turbine.