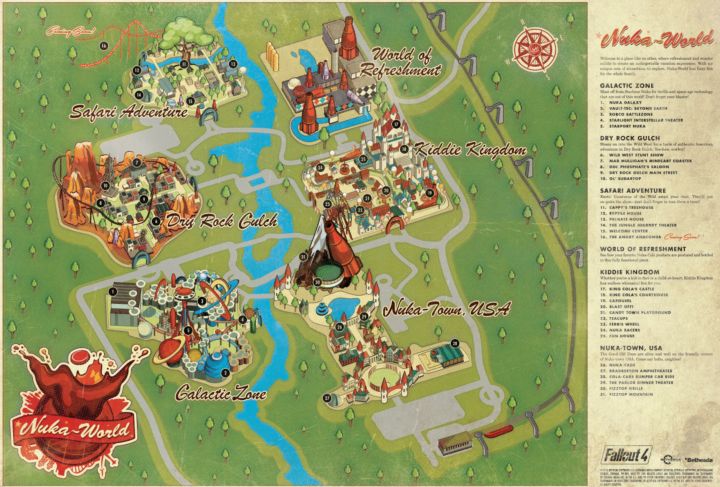 While some of this is elaborated upon in my Nuka World endings guide, some players won't want spoilers that deep. Thus I'll summarize some of the things you should know about The Grand Tour and its importance. I've linked walkthroughs to some of the individual areas here, though there are more to be done.

The Grand Tour is started after An Ambitious Plan, in which you meet all three of the raider faction leaders. With the tour, you are formally Overboss and get to do what Overboss Colter didn't do because he was too busy tinkering his fatally-flawed Power Armor: take back the Nuka World park.

There are five areas to give out, but three gangs. The land cannot be divided equally, and raiders are a selfish lot. Some players will want to know that their actions during this incredibly long quest do matter. See the page about new SPECIAL and faction-specific perks in Nuka World. You can skip the spoilers section if you like (it is easy to skim past). Just look at the three perks that can be awarded to you and select two you'd like to favor. That is, perhaps, the part that has the largest impact on gameplay.

While it does not matter exactly the order you take over the park areas, some are harder than others due to their enemy composition and other hazards. Knowing ahead of time may help you to select weapons and gear appropriate for that part of the park. I recommend you start with Kiddie Kingdom, but that entirely up to you. These are listed in the order I'd recommend with the benefit of hindsight.

How to Claim for Raiders
Finish the quest for the area, and a marker will appear that leads to the flagpole. You can select to give the area to the Disciples, Operators, or The Pack.

Associated Quest: A Magical Kingdom
Quest Goals: Investigate 3 areas of the zone and deal with the mysterious figure on the intercom.
Hazards and Enemies: Ghouls, many of them in leveled varieties. Radiation exposure is heavy here, due to mist spraying poles adapted to distribute toxic vapor. One area (fun house) is quite weird but holds a few secrets. I found this to be the most annoying area, though that's subjective. I like that I got it out of the way.

Associated Quest: High Noon at the Gulch
Quest Goals: Investigate Dry Rock Gulch and win contests, then exterminate the source of Bloodworms
Hazards and Enemies: This place has many bloodworms of differing difficulty. Assembling a code for a safe by finishing a variety of tasks is required to finish the quest. Players should be aware that bringing the Silver Shroud costume (hopefully the good one) in this area results in a different experience.

Safari Adventure is overrun with Gatorclaws

Associated Quest: Safari Adventure
Quest Goals: Find the source of the Gatorclaw infestation
Hazards and Enemies: Nearly two dozen Gatorclaws are strewn throughout the area, sometimes in groups of 3. They're quite powerful but there is plenty of room to maneuver in this area as opposed to the bottling plan. I'd have preferred to have done it second had I known at the time. Melee players will want to pass the speech check with Cito in order to get an unique baseball bat that refills AP on a critical hit. Quite powerful.

Associated Quest: Star Control
Quest Goals: Locate Star Control, clear the Galactic Zone of enemies and find star cores.
Hazards and Enemies: Many robots of many varieties, including Startenders, simple Protectrons. You've got to clear a lot of area and search for a number of star cores that may not all be easy to find. Players with Robotics Expert will find this area easy. 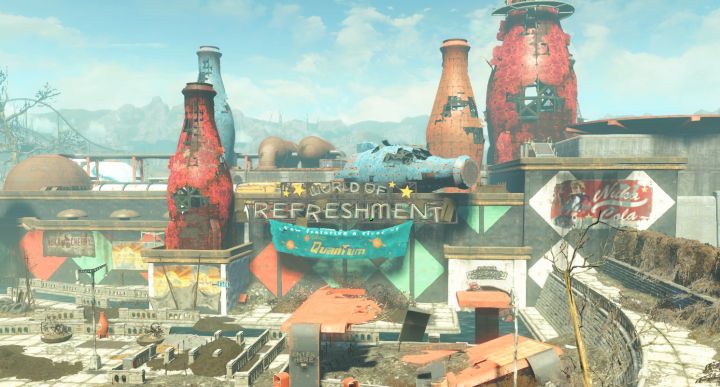 Associated Quest: A World of Refreshment
Quest Goals: Clear the inside and outside of the facility. Includes both the bottling plant and nuka cola tour 'a world of refreshment'.
Hazards and Enemies: Nukalurks, OP Mirelurks in various varieties - you'll face everything from the simple hatchlings (meaning you can collect eggs), regular Nukalurks, Kings, and Hunters. A battle with a Nukalurk Queen awaits you, and she's quite challenging. I did this quest second but it would probably be appropriate to do last or next to last. You can find T-51f Power Armor in a Nuka cola design here.