Once you've completed the Quest Ambitious Plan and started The Grand Tour you've got the ability to claim areas of the park for Raiders, what then? Some of the areas are notoriously hard - particularly the Galactic Zone area of the park. One of the easier ones is Kiddie Kingdom, inhabited by ghouls. I suggest you bring Gage with you, since many companions do not like working with Raiders. You can find an exit into the wilder areas of the park to the east of your headquarters in Nuka Town, USA.

This is a quest where I'd advise power armor, or at the very least a lot of both RadAway and Rad-X. There are probably 40-50 ghouls in the areas you'll travel, in total, and some of them are higher level, so you'll also want plentiful ammo before even bothering to enter the kingdom.

Deadly radiation mist is all over Kiddie Kingdom. Come prepared, and try to go around these where possible!

First, know that it seems there are many more ghouls at night, though I cannot be sure. Second, don't get too close to the mist sprayers strewn throughout the area. It's inevitable you take a few deaths' worth of rads while traveling in the area, due to the toxic sprayers. Above all, try not to get too close to them as it is more damaging in close proximity due to the thicker mist. Anything that moves here, in regards to rides, can greatly injure or kill your character, and there are several of them. You don't want to find this out the hard way. 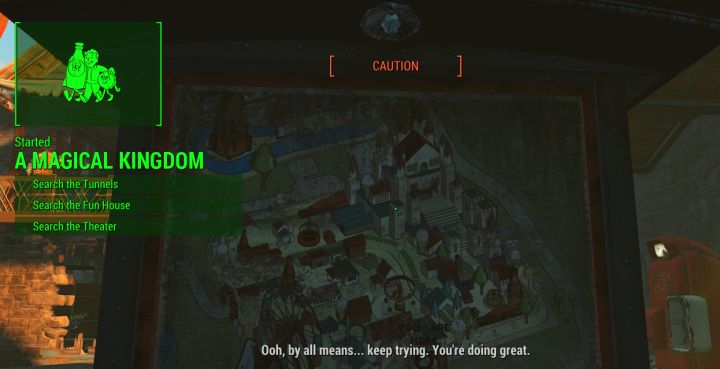 A Magical Kingdom is required to even get to the flag pole in Kiddie Kingdom in order to claim it for one of the raider factions in Nuka World.

This quest must be finished in order to assign one of the three raider gangs to Kiddie Kingdom. Upon entering the area, you'll be taunted by a mysterious man on the park's PA system. The quest will direct you to search three separate locations. Most of it can be traveled using the signs here and there throughout the park. You need to search three areas, in no particular order:

This one is in the King Kola's Castle area, in case you follow the signs or utilize the park maps. The markers may seem a tad inadequate at times. The theater is simply a moderate ghoul battle, and your (possibly) first encounter with someone named, 'Oswald the Outrageous'. He's a ghoul who can heal and performs magic to disappear. Each time you bring him down, he'll heal up, but he will escape after a time. Check the area for a Nuka Berry recipe for the Nuka Cola Machine that can be built at Settlements. Also, when done with the inside of the theater go outside using the other bridge and up to the castle tower room where you'll find Rachel's computer. The key to the tunnels is here, though there's a second entrance that doesn't require a key.

A strange scene in the tunnels.

You'll have a weird encounter in the tunnels, but since I try to avoid those direct spoilers, I won't elaborate upon its content here. This area is very simple and nothing challenging. Finding the key first may have saved a little time, but it's not like the place was a maze. I found nothing of particular interest in the tunnels, but could've missed something. 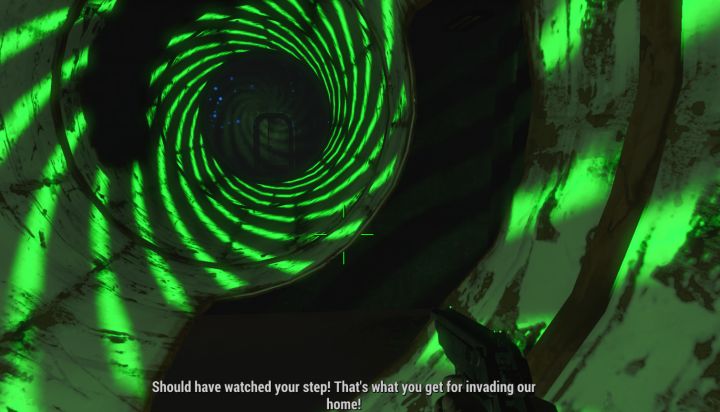 It's a fun house, with holes in the floor. And deadly booby traps. Don't worry, it'll all be over soon.

I saved this for last, and I'm glad I did as it may have deterred me from the rest of the quest. It's not TOO hard, it's just frustrating and perhaps the most dangerous part of Kiddie Kingdom. First, a mirror maze with mines and ghouls. The mirrors don't really work, the maze is not too challenging but it did take a couple tries. I found using my pip-boy's flashlight helped me to navigate it a bit. There's additionally the dizzy room seen in the trailers, which is basically a place to shoot ghouls that can't attack you. Finally another minor maze with rotating corridors, and holes you can fall through if you're not careful (pictured).

After completing the search, Oswald will call you back to King Kola's Castle, where you can now find the elevator inside the theater working. Before you do that, consider your options. If you did as I suggested and went to read Rachel's terminal in the castle, you know he had a girlfriend who set off to find a cure for the 'illness' everyone was facing when they were turning one by one into ferals. It is possible to find her and a peaceful resolution to this quest. Your options are:

If you DO fight Oswald, know it's nothing like the first fight. He'll heal up about 5x before he's finally dead, and he'll keep summoning ghouls throughout the battle. Radiation can be a problem, as are the multiple legendaries that may spawn throughout the fight. Just fair warning, so you know to save. It's not nearly as hard as other fights, but was an unexpected challenge after a period of relatively easy combat. 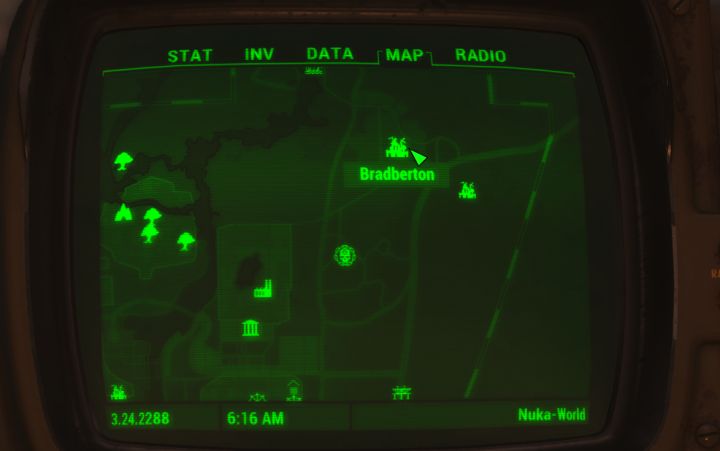 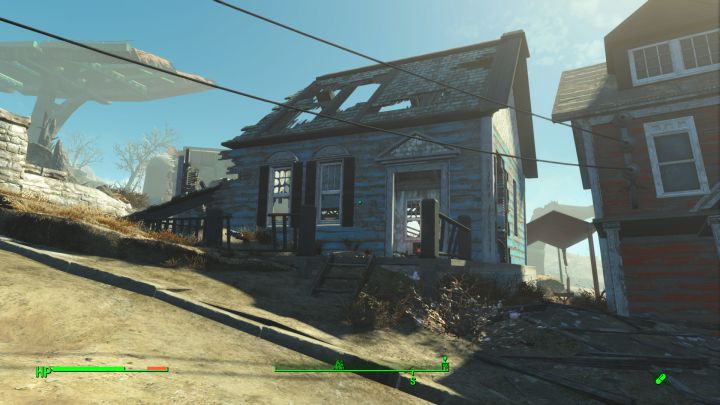 Bradberton is located in the extreme Northeast of Nuka World. Rachel can be found east of the map marker for Bradberton in the house above.

Rewards for 'A Magical Kingdom' 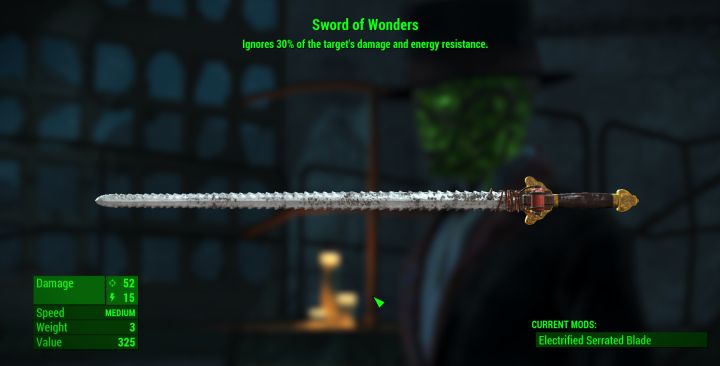 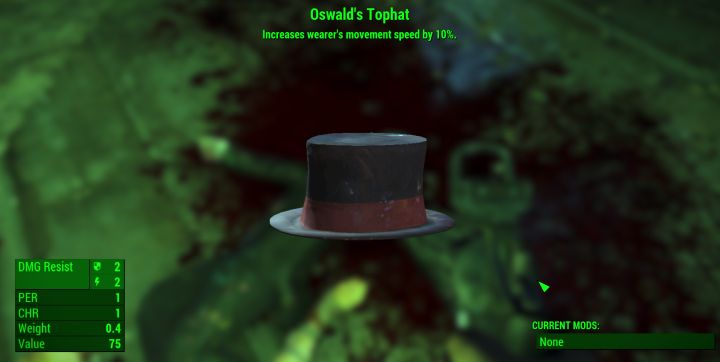 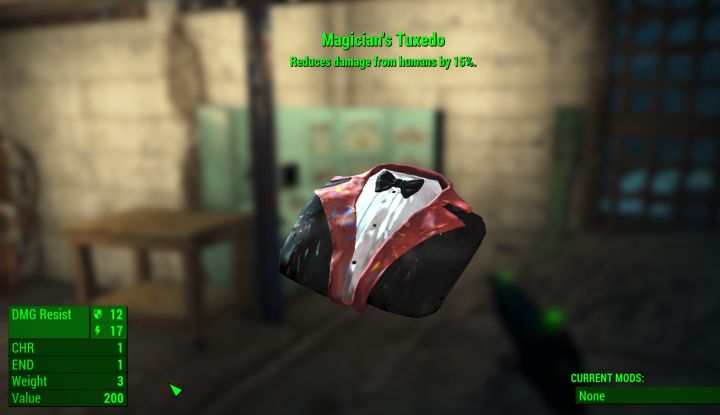 Three rewards are possible, most players will get the first two. You only get the Magician's Tuxedo if you killed Oswald the

If you do the second or third options above, you will be given Oswald's weapon (Sword of Wonders) and top hat - which is sweet, the hat increases movement speed by 10%. The Tuxedo reduces damage dealt by humans, but is one of those full-body pieces and cannot be worn with armor. The tuxedo can be fitted with ballistic weave, though the tophat cannot (too bad!).

Assign a Gang to this part of the Nuka World park will claim it as their territory.

Now that you've finished the quest, you can access Oswald's terminal and disable the poison mist sprayers throughout kiddie kingdom. Additionally, you can step out on the balcony and select the flagpole. A dialog will pop up: choose to claim this part of the park for either The Operators, The Pack, or The Disciples. There is a greater purpose to this, you can learn a bit more (if you don't mind spoilers) on my Faction Perk and Benefits Page. To keep it simple, if you like one of the factions make sure you do not neglect giving them ANY territory, the gang with the least territory is going to grow more upset.

Previous: An Ambitious Plan.
Next: You may want to try the Nuka Cola Bottling Plant where you can get Nuka Power Armor if you can beat a Queen.

Rick
Does anyone remember a door on the outside of of a wall that said it wouldn't open because it did not have power? Now that I have power turned on...tried to find it again. No luck.

3
John
The door is opened from the other side. You have to access the Project Cobalt bunker inside the bottling plant after you've turned the power back on.

0
G
I only remember 2 doors.
1 inside The World of Refreshment and the 2nd outside of Dry Rock Gulch behind some hedges

3
John
Is there a way to see which factions I have already assigned a park section too? I tried looking at the flags. That was no help.

1
Brian
The only way i found to find out is go to each zone and find the haul pick up spot. Who ever is there is the faction that you assigned to.

7
Nick
I finished the quest searching/killing oswald. after which you are required to turn off the mist sprayers, however in my game they are already turned off and i can't turn them off and on again and the game doesn't realise this and is now *****. What do?

0
Chase
I've got the same problem. Did you find afix?