Boston Common's Location - this is where you begin the Road to Freedom Quest to join the Railroad Faction.

The Railroad are one of four main factions in Fallout 4. Joining them can be annoying, as at the game's release there isn't a quest marker (like the only quest without one), so some players may get confused. When you reach Boston Common, you will see a Protectron tour guide that speaks of the Freedom Trail. You should get a quest 'Follow the Freedom Trail', but I don't think this is actually necessary to finish the quest. 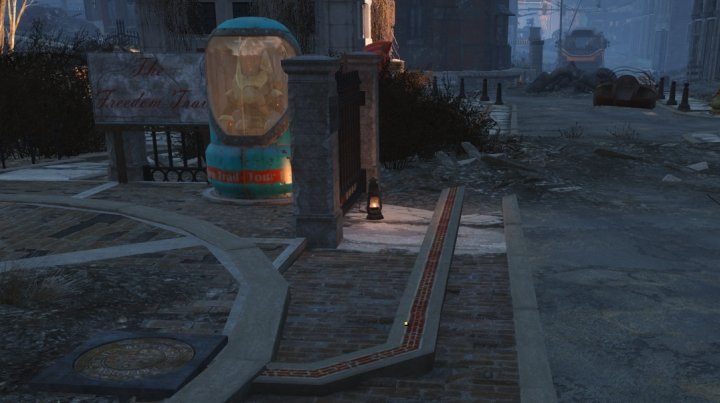 Follow the trail starting here, in Boston Common. These markers are key to the puzzle at the end of the Road to Freedom Quest

Following the Trail
Thankfully, the Trail only goes one direction so you don't have to worry about going the wrong way - it's not a loop. From that Protectron station, follow the red bricks set in the pavement. At some points, it's done with paint where the trail is broken, and you'll occasionally find it's covered in rubble. Pay close attention, and consider sneaking so that you don't aggro every enemy along the way - but then, you may just love that you get to tangle with some supermutants, ghouls, and raiders along the trail.

Old North Church in Fallout 4 - you can fast travel here if you've discovered it already.

The Trail ends at Old North Church. You could probably fast travel there if you have already discovered it. Inside (after killing a few ghouls), look to the right and you'll see a candle flame symbol set into a broken segment of the building. You can go under this to reach a basement level, where you'll see that same symbol.

The Railroad's symbol in Old North Church. Head under here to reach a basement.

Continue until you see this plate set into the wall. Along the Freedom Trail, you will have seen plates similar to this with letters and numbers - like 1, R or 4, L. The whole thing spells out Railroad. So, spin (click the edge of the plate) and gradually spell out R-A-I-L-R-O-A-D, pressing the button each time the marker is lined up with the right letter. 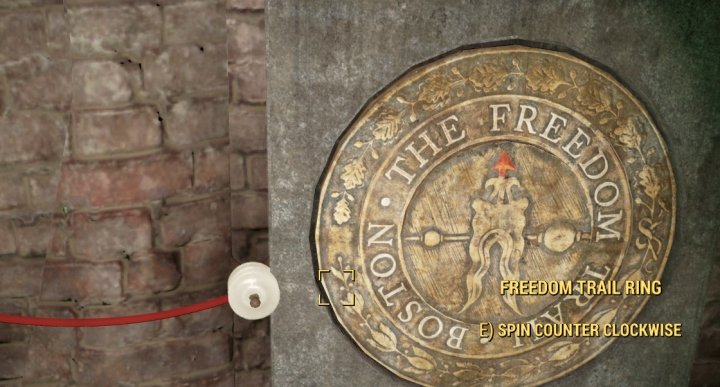 Spell Railroad by spinning the dial and pressing the button on each letter. It doesn't matter which 'R' you pick, for example. Just that you spell it correctly.

The door will open, allowing you access to the Railroad Faction's 'base', with guns pointed at you. Try not to be too much of a smartass, and you'll get in.

The Road to Freedom Quest is completed, and you've now joined the Railroad.

Benefits of Joining the Railroad - the main benefit of joining the Railroad - from a strategic character-building perspective - is the ballistic weave mod, which can let you add a large amount of armor - damage and energy resistance - to clothing items. Of particular use are certain hats. Do enough quests and this will inevitably come up. Once you have the recipe, you can follow your own path and decide which faction in which you'd like to get maximum rank.