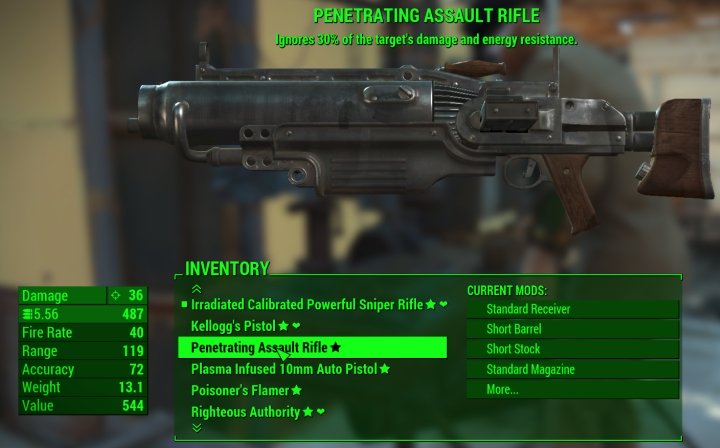 Most anything but revolvers, specific unique weapons, big guns, and hunting rifles can be turned into automatic weapons that benefit from Commando. If the receiver or barrel says 'automatic', you're sure to benefit. Hair trigger is not automatic.

Fallout 4's Commando Perk is great for any type of player - whether you prefer to play shooting from the hip, or make regular usage of V.A.T.S. to fire at your targets automatically. Early on, I recommend this more for players who prefer to go in guns blazing rather than hang back and snipe. Of course, later, you can take all of the Perks because of the lack of a level cap. Let's have a look at Commando's Ranks and bonuses, then get into just what it will do for you. 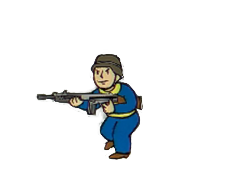 What Weapons Count as Automatic
This Perk affects any type of automatic weapon, so long as it doesn't fall into the big guns category (Gatling Laser, Minigun, Fat Man, MIRV, Flamer). You can turn laser rifles, 10mm handguns, pipe pistols, and shotguns into automatic weapons, then of course combat rifles. Changing the receiver type will accomplish this. For some energy weapons, it's the barrel that makes the change to automatic. So all of these will benefit from the damage granted by this Perk, along with its other bonuses. You will see the damage go up before and after taking the Commando Perk if you analyze an automatic weapon.

Being the curious type, I had to see just how much the hip fire accuracy bonus would affect the sights from 3rd person, where we see the largest 'spread', in order to get a good look at this bonus in action. As you can see, it did decrease the size of the hit box. I measured, and from rank 1 - no hip fire bonus, to rank 3 - maxed hip fire bonus, it reduced the size of each box by about 25% on all 4 weapon types I was testing. So that's great - it increases the effective range of hip fire with these weapons, because more bullets will hit the cursor at range. Not a big deal for point blank.

The targeting box is 25% smaller with Rank 3, meaning it's easier to hit opponents that are a bit further away. This is my most inaccurate weapon, and automatic shotgun, so it's saying a lot. More accurate weapons were also noticeable, just the best weapon to use for an example. Keep in mind, recoil also matters.

Modifications that reduce recoil are highly recommended if you're going to hip fire primarily. While a longer stock might increase cost to fire in VATS, it is going to help keep this box small when you're hip firing often. A muzzle brake may help even more. My extreme example above was a combat shotgun.

Along with this bonus, I noted a minor change in accuracy between ranks 1 and 3 - from 48 (rank 1), to 51, and 54 with an automatic combat shotgun, and from 77 to 78 and finally 79 with a laser rifle. So it must be based on weapon type, clearly not a percentage boost. Still, this is going to have a minor change in the ability to hit enemies in VATS at medium range. 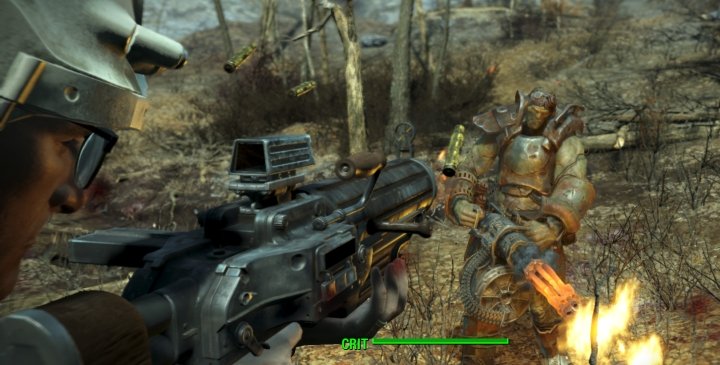 In general, enemies Supermutant-size and smaller can be staggered with Commando's Rank 3 and 4 Perk. It grows more useful at the level you get it, because more miniguns and super-sledges come into play, and those dangerous baddies wielding those weapons can be slowed down while your bullets (or beams) do their work.

Staggering Enemies with Commando - You're hitting your opponents so hard, being a Commando and all, that you can stagger them. This doesn't happen very often on a round-to-round basis, but seems to be something like a 10-15% chance every second or two. It is decidedly better to have a faster weapon to get it to trigger more often, while you may have a stronger, slower weapon for handling enemies that can't be staggered. A stagger is not that useful, but will temporarily stop that creature attacking you, very effective whenever someone is mowing you down with a minigun or gatling laser or charging you for a melee attack. Of course, as with Pain Train, large opponents like Deathclaws, Yao Guai, Mirelurk Queens - they cannot be staggered by your puny bullets. At least, that's what my testing came up with. 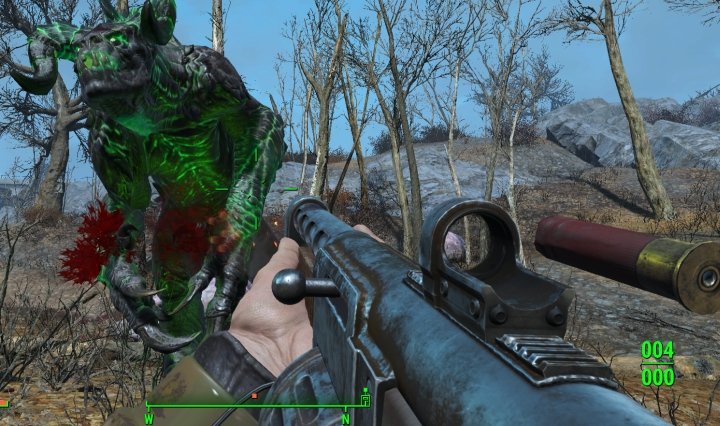 Deathclaws, Yao Guai, and Supermutant Behemoths will not be able to be staggered with Commando, but they're big targets, easy to hit, and you can mow them down with all 5 Ranks in this Perk along with heavily modified weapons.

Perk Synergies
If you're going away from using V.A.T.S. heavily as a pistol user might, you'll definitely want Power Armor so that you can deliver the pain without worrying about damage too much. But what else goes good with Commando? Action Boy may be a good choice if you're going to use VATS and deliver those fast bursts often enough to warrant it. It's good in sticky situations and to cripple specific enemy limbs. You'll notice the stagger way more often there, with the added benefit of disabling your enemies.

Steady Aim didn't reduce the size of the box, but it DID reduce the amount of recoil when holding down the fire button - it was much easier to stay on a target with this Perk. Get it.

If you're more the hip-fire type, you can avoid even having to aim your weapon by maximizing Commando and going with the Steady Aim (Strength 7) Perk. This will minimize even more the effect of recoil when you're bursting with your weapon. Only the furthest targets will require you to use your sights and fire from afar. This doesn't directly impact the hit box as far as I can tell - it affects how much weapons recoil, which makes sense - so you will not see it widen as much. It's incredible with rank 3 and up of Commando.

Another not-so-bad synergy is Penetrator, because it'll let your shots go through cover in V.A.T.S. mode-only, and it can help prevent you having to expose yourself to more fire in order to take down an enemy.

No matter your playstyle, nor how good you are at shooting automatic weapons, you might want to take the Scrounger Perk so that you'll find more ammo. Also, use a few different types of ammunition - 5.56mm, shotgun shells, and fusion cells for example. You'd have a longer range (combat rifle), up-close punishment (shotgun) and weapon for enemies that are more resistant to physical damage. You might even throw in a weaker auto-pistol for trash monsters that are not worth a precious shotgun shell.

ID
This is a really good sight. Has some much needed information.
Since you did some testing, maybe you can look at some of the mods who descriptions say they will improve RANGE or ACC but the RNG/ACC numbers do not change from the mod lower down on the list.
One additional question, if you were to mod out the BEST hip fire weapon, what weapon and what mods would you chose. If you have already covered this somewhere on your site, I apologize, I just started going through the site. This is one of the best sites for FO4 I have found however. I wish I had a way to share it with more people.

1
James
From what i've seen being in power armor helps reduce the maximum spread you get out of automatic weapons. i think there may be a modifier tied to the strength stat.