Upgrading Weapons and Using Mods from Others 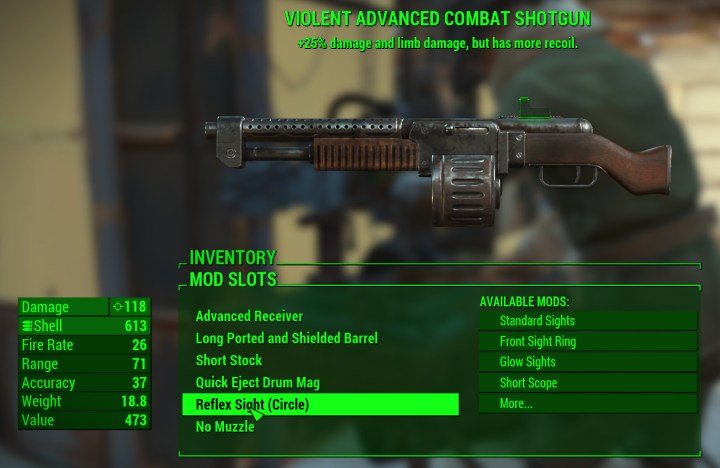 Fallout 4's Gun Nut Perk allows the customization of all form of ballistic ranged weapons, and thus damage, accuracy, recoil, and other alterations. Weapons can even be changed from semi-automatic to fully automatic, from pistols, to rifles. Energy weapons tend to use Science! instead, while ballistic weapons may take one or both for more advanced upgrades. Gun Nut gives you a lot of flexibility, but for some players isn't viewed as entirely necessary. It is a matter of convenience. 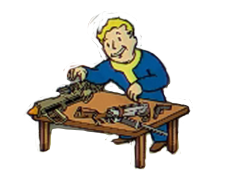 Gameplay Effects & Utility
I personally enjoy this Perk because it reduces my reliance on random generation of weapons, but for some players it is not 100% necessary due to the fact that you can:

While this works, the odds of finding that exact weapon type with the best upgrades for that slot are low. You should pay attention to weapons you find though, as you may be mid-game and find a high-rank mod for a weapon even if you have Gun Nut, just not enough ranks! You can generally tell just by the name of the gun. Taking mods off weapons will reduce their sell value a bit but if you find one you really think you might use later, the standard modification should only take common components and be much easier to craft than the advanced ones which take things like fiber optics, nuclear material, and others that are more rare than steel and screws.

For players contemplating taking ranks in this, first look at the weapons workbench and your current loadout and see if you even need it yet. You may have next to no materials required for an upgrade, or find that those upgrades only offer you marginal benefits.

If you want a chance to try out all the weapons in Fallout 4 without forcing yourself into a particular type of ranged weapon, Gun Nut is a good solution, but later you will need to choose, especially if you're playing a high-difficulty game. The modifications added to weapons get multiplied by Rifleman, Gunslinger, etc. and give you even more 'bang' out of these Perk points.

If you are early in a game and sure you want, for example, a high-Luck pistol build, you would be better off taking Gunslinger over Gun Nut for pure damage, but Gun Nut gives a spread of performance increases. With one or two ranks you can add substantial damage, accuracy, range, and recoil reduction to a weapon, increased ammo capacity, a silencer or a scope.

Overall, look at what is available for your weapon and whether Gun Nut would benefit you now as opposed to later. It is one of those cases where you can investigate before blowing a perk point that might go toward something more immediately useful. I highly recommend you take it at some point, but when is up to you!

Red
"the odds of finding that exact weapon type with the best upgrades for that slot are low"I realize this is a subjective conclusion and very much determined by the random generator, but I felt like I often found high level mods on loot/vendor guns BEFORE I was even high enough level for the Gun Nut tier required to craft it. I'm referring to some of the mid-game weapons' mods, not the early game pip rifles.My personal conclusions for Gun Nut are that it's great for an early boost because pipe guns can be modded with Gun Nut's lower tiers right out of the vault, but less important mid-late game when finding mods is easy. It's necessary for super rare gun types because you just won't find other copies with mods to pull off for swapping. And it's really helpful when you want to outfit dozens or hundreds of settlers with max modded combat rifles and combat shotguns because relying on loot/vendors for the top-end receivers is easy if you need 1-2 for yourself, but impossible when you need 100+.Also, I didn't see you mention it, but one of the biggest draws of Gun Nut is that it's required for all the town turrets. Collecting weapon mods is simple enough without Gun Nut, but there is no way to build anything but the basic (worthless) turret without it.

1
Carl
You make some great points, and I absolutely forgot to mention the requirement for building turrets. I'll leave whether this perk is necessary up to players, mainly wanted to get across the point of not requiring it for mods. I honestly should check vendors more often for good weapons on this new playthrough I'm doing in preparation for Automatron. I almost never buy things, and sometimes my style of play comes across in articles in situations like this :)

1
Flak
Actually late game this perk worth every bit of points, even if you are a pure melee character. Same goes with Science. HMG turrets is one thing, but being able to arm settlers with powerful weapons, especially in Far Harbor, is certainly useful and you don't have to hunt down weapons with good mods from merchants.The Nuka World guns also needs 4 points to unlock their most powerful receivers.

0
SmokeJaguar
As I've come really late to the party, blame Skyrim and then ESOnline for that, these type of guides are really helpful. Really appreciate all the time and effort thats gone into this.
Cheers.