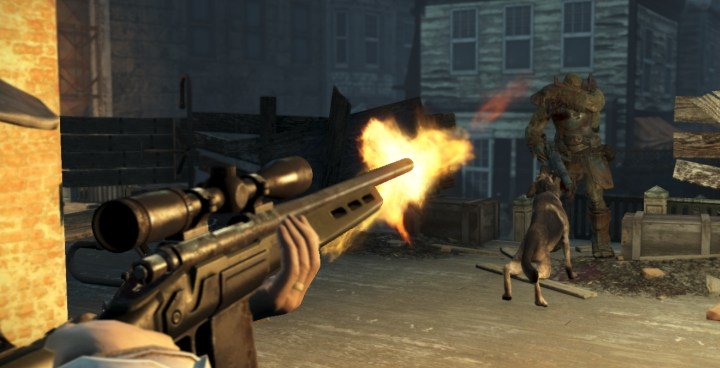 Rifleman affects energy and ballistic rifles, which includes shotguns. It's a great perk and easily the most important to any sniper build.

The Rifleman Perk is good for both Snipers and players who want to make their character super-proficient in using a shotgun. Anything non-automatic that isn't a pistol or heavy gun is pretty much a rifle - from simple pipe rifles, laser rifles, to double-barrel shotguns and the immensely powerful Gauss Rifle. Here are the 5 ranks of this Perk, its requirements, and further assessment of its strength and mechanics:

Gameplay Effects & Utility
Rifleman is unique in its ability to penetrate armor, making it the weapons perk that boosts damage the most in Fallout 4. How much extra damage you will deal is complicated to people who aren't great at math, but in general the higher their armor the more you'll do over what you would've done without the extra armor penetration. Here is Fallout 4's Damage Reduction formula for those interested. It's worth noting that in the game files you can see this is currently only reducing ballistic (not energy) damage resistance. Hopefully this is a bug that will be fixed.

That this can be used with combat shotguns and fast-firing non-automatic rifles is a major plus, in that you can not only snipe with it, but also have a good weapon for when enemies are close and you need to eliminate them quickly. Damage values you see in Pip-boy will reflect this Perk's boosts, and you can easily get weapons over the 100 damage mark without them being two-shot.

Rifleman is the quintessential perk for a Sniper, because without that extra damage enemies will gradually outclass your output even with a good gun. If you're making a Sniper build, you should take this at every level it's available again, especially if you're playing on a high difficulty setting.

The chance to cripple limbs is an afterthought that sometimes comes in handy when facing legendary opponents and powerful creatures like deathclaws and yao guai. Rank 4 gives you a 5% chance to instantly deal 9999 damage to a limb, Rank 5 is 7% - so it's not something to be relied upon but is awesome when it works. With 5 ranks in Rifleman and a good weapon, you will not often need this but appreciate it when it does happen. It's particularly helpful if you like to play on very hard, where enemies' limbs can actually be crippled as opposed to normal/easy where often you will kill just about anything before their limbs can even be crippled.