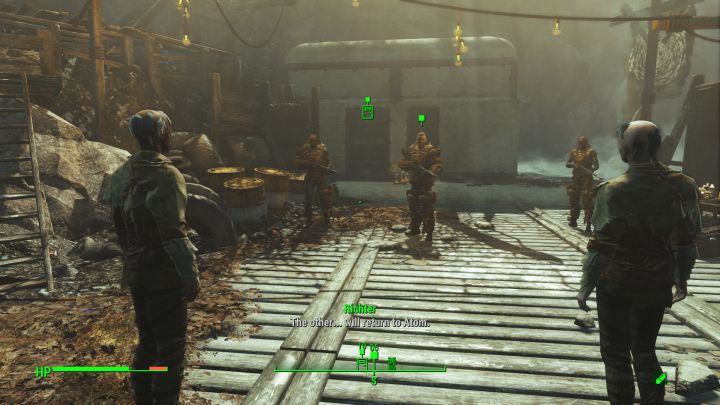 Attacking the Children of Atom and having yourself become enemies of the faction is an option, it's just not a good one.

Normally you'd - at least at first - cooperate with the Children of Atom in Far Harbor, join the faction (which only takes one quest), and get to know their fanatical leader Tektus. Since some players might like to try, I thought I'd write about my experience trying a full-frontal assault on the Children of Atom upon first meeting after getting the Better Left Forgotten Quest from DiMA, and directly going after the objective by fighting my way through the Nucleus and on to where his memories are stored. This is really not a great option and ruins a lot of well-crafted storytelling Bethesda has provided, but it is indeed an option. You are warned against it during the Best Left Forgotten Quest, which you need to have started in order to advance the story should you attack this faction. At least for efficiency's sake. I'm not sure what would happen if you did this before ever meeting DiMA.

I figure I may satisfy my own curiosity and a few players' as well by logging what happens. By doing it this way, you're undoubtedly passing up some quest rewards that are unobtainable, and possibly not getting the 'best' ending for Fallout 4's Far Harbor DLC. It just so happens it is an option. 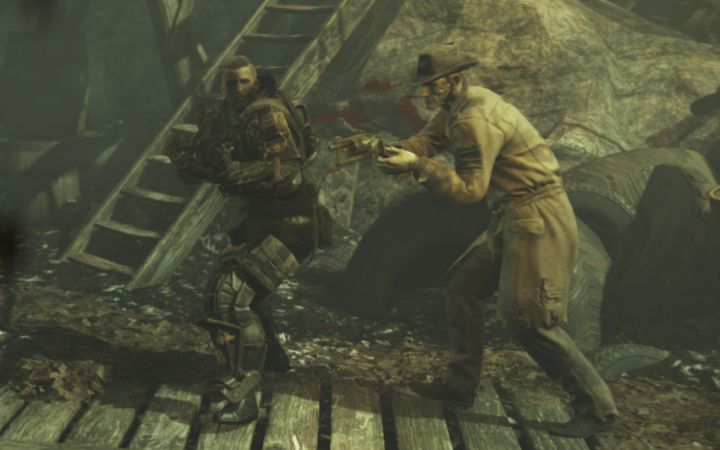 Zealot Richter and the other guards are appropriately strong, especially at Hard+ due to the amount of rads they'll lay on you.

First, it's a relatively challenging feat just getting inside unless you start from a distance. I did it from about 3 meters away and relied heavily on VATS and RadAway. It's a dumbass move to do this with next to no radiation resistance, and even 40-50 is not that great given their radium rifles and gamma guns all do rad damage. Rad-X helps a lot, but Power Armor would be much better for this. 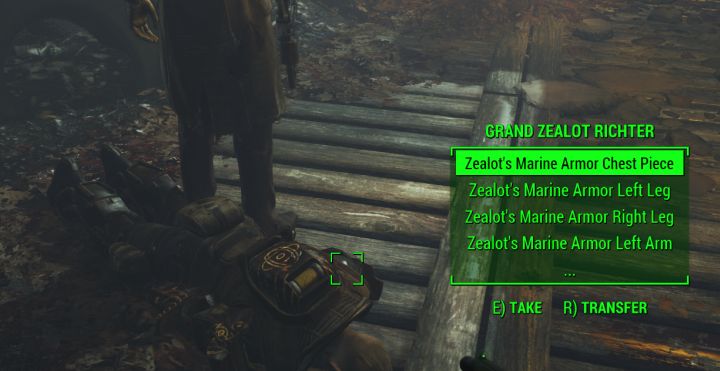 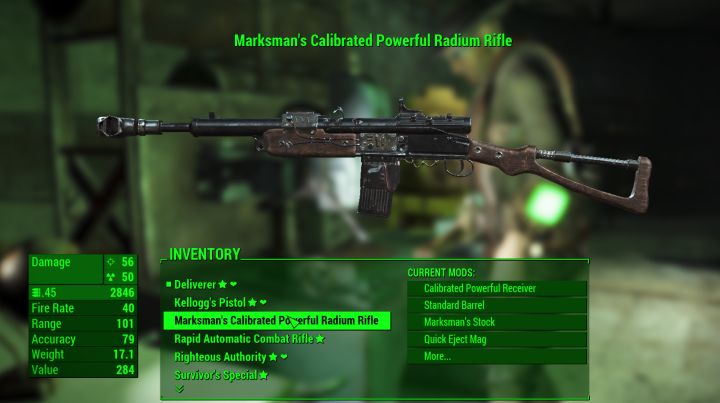 You can take Zealot Richter's armor for yourself, though it may not be unique at all. Radium Rifles will decimate trappers and raiders back home, but a normal rifle is better against the creatures of Fallout 4

Outside, the Zealot Richter can 'give' you a full set of Zealot Marine Armor (a variant that makes you look like a Child of Atom), though that's not preferable to the badass look of the normal set, at least in my eyes. They also carry the new radium rifles, which deal both physical and radiation damage and can be modified to be very powerful against humanoids. In this fight, and inside, an abundance of drugs will help immensely to improve damage and rad resist, your own damage, max hp, and maybe Perception if not using Power Armor. After all one addictol can cure a long day of partying. 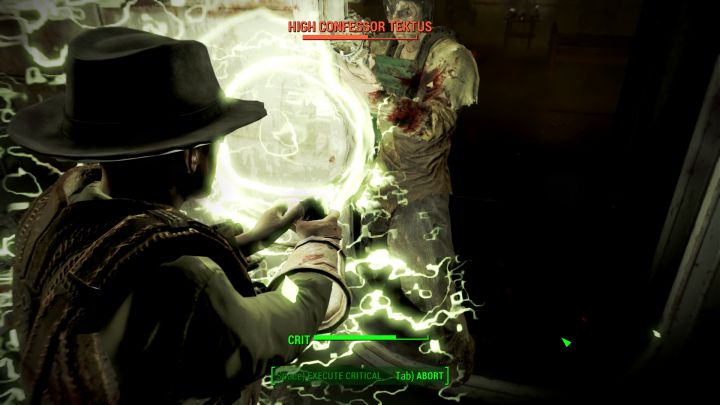 The attack on the base took a lot of supplies because there are about 15 members inside. You do not need to go inside the submarine (The Nucleus) to access DiMA's memories. Actually, you go upstairs to the far top corner of the room. Inside the sub you can kill the Children of Atom leader and take his helmet and robe, so it's worth a trip while you've weakened his defenses. Nothing too special that I noticed. 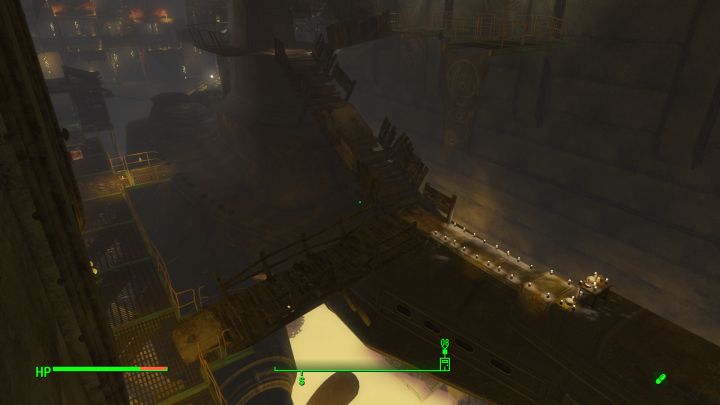 Click to Enlarge. An unique view of The Nucleus, the Children of Atom's sacred place which happens to be a nuclear submarine.

Once you make it to the old area where DiMA's memories are stored, you face heavy mechanical opposition, starting with a Mr. Gutsy who may be legendary (easy) but also including an Assaultron Dominator (perhaps leveled). It was tough in tight quarters, but doable. These guys self destruct when killed, so get back before looting them. The turrets are easy as they always are, and I ran into normal protectrons. Some defense I thought...

A Mr. Gutsy and Assaultron, plus a lot of turrets, guard the area where DiMA's memories are stored

Until I got to the room with the terminal that stores the memories. At first perplexed as to why I couldn't just used Faraday's Program, it said the auxiliary power was off. There's a terminal with some backstory on the submarine if you like lore, and if you can't hack it, Nick Valentine can do it. After much searching in an embarrassingly small area (I'm not very observant), I found it in the back (behind the security doors and in between computers) along a wall, a lone switch. Immediately upon turning it on, I encountered the real security here. 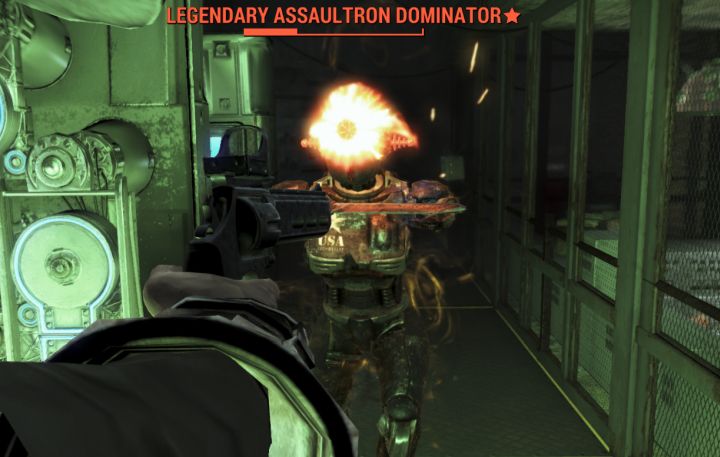 The Assaultron Dominator (Legendary) that spawns when you flip the switch is quite challenging in such a small space. Definitely one of the more difficult fights I've had in the DLC.

A Legendary Assaultron Dominator will spawn and it is a badass in such tight quarters. Evading its melee was hard, evading its eye a bit easier given you can kind of run in circles around the area with security doors. Once it was defeated, I escaped the blast just in time (haul ass to get away from its body). 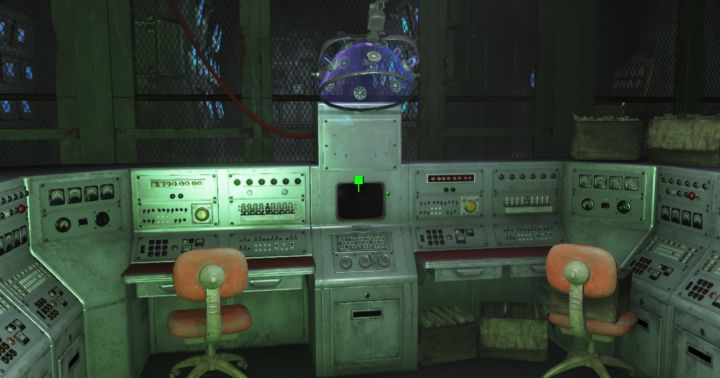 DiMA's Memories are in this terminal, though you need the Faraday Program in order to access it. First, provide power to the damn thing by hitting the switch in the back.

I was now able to use the Terminal to get DiMA's memories (and solve some hard puzzles), without having to be initiated into the Children of Atom. Of course, there can be no perfectly peaceful ending for the Island once I'd done this. DiMA will be later be aghast at what I'd done. He offers me only one option for dealing with the Children of Atom - you cannot negotiate with their leader if you've turned the faction against you, though you can leave the island in a state of conflict by choosing not to do anything about it. Despite the heavy blow they take if you do this, Children of Atom will live on, leaderless (and some will probably respawn one day). Ultimately, doing this I could only decide how the people of Far Harbor and Acadia got along, and I'll spare the major spoilers on those things. I did this just to see what happens, and it's supported by the story but not a favorable outcome.

There IS more story from here, because of DiMA's memories and what they reveal. You still get to settle things, there are a few quests remaining, and you have some investigating to do before you can choose to get Kasumi back to her parents in the Commonwealth. Because the real rewards come from finishing DiMA's quest, I'm in favor of reloading my save and getting into the Nucleus the normal way by joining the Children of Atom. Cooperate with the CoA and earn their trust, at least enough to infiltrate the area and you'll have a much more satisfying ending to Far Harbor.

andy
The last assaultron was quite easy to beat. How? 3 fragmentation mines next to each other. They always run towards you, why not use that?

4
adam
Always go for the legs in vats on fast moving baddies. Take its legs out and it crawls. Easy to take out.

2
Child of adam
hey adam, if i was your son, would i be a child of adam? lmfao