Points of No Return and How Far You Can Go 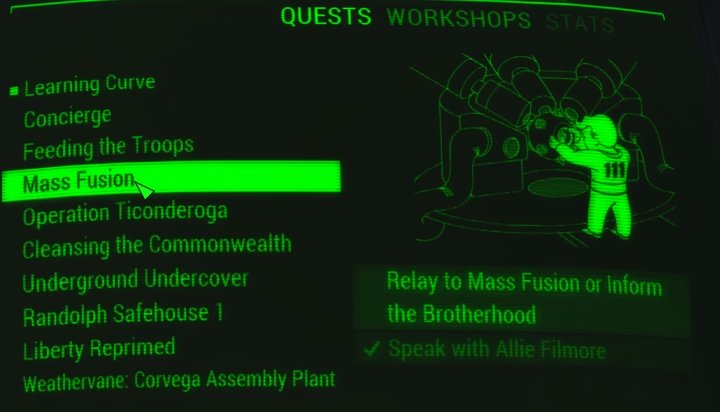 I've tried to document the quests that turn factions against one another. Mass Fusion is a major turning point in faction relations between Institute and Brotherhood.

I suggest you do not read this unless you've already met the Institute. This is for the end-game. I am going to write as little spoilers as possible, but want to help who are hesitant to do faction quests out of fear of losing their standing with the others. Ultimately, the faction you like most is who you should probably work with - the game continues after the end, allowing you to level up infinitely. There are four different endings in Fallout 4, depending upon which Faction you choose to end the game with, and different sequences of events leading up to it. Every fully completed main quest results in you having one faction of the three main warring factions, plus the Minutemen in your version of the Commonwealth. Some of it is the same, but the ultimate consequence is which faction you'll continue to work with after the end of the game.

The purpose of this is to ease your mind that you can play a portion of each faction's main quest without crossing a line and ending relationships with other factions, should you wish to achieve certain goals with them. A new playthrough or save where you are at a turning point are suggested to experience each faction's main quests. This info is NOT perfect, as some players may point out because of all the different faction quests different players will have in their quest log. However I do believe it does document the turning points very well.

Who Wants to Kill Who?