Fallout 4: The Secret of Cabot House 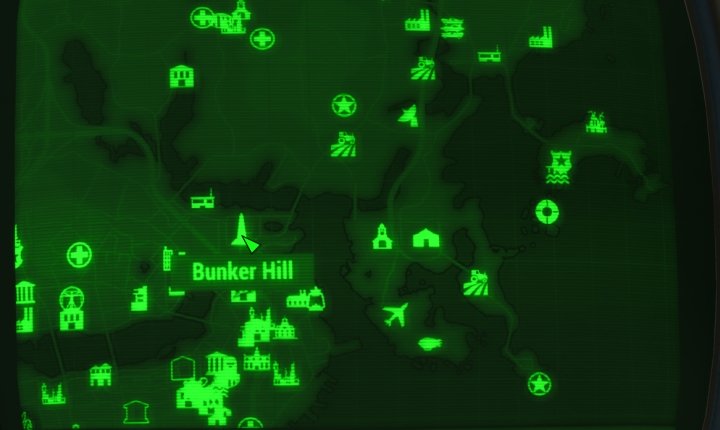 You may meet Edward Deegan at the pub in Bunker Hill. There you can get a quest called 'Special Delivery' to start the Cabot Quest line.

The Secret of Cabot House Quest chain is one of the more interesting side Quests in Fallout 4. Completing this chain can net you a Charisma Bobblehead, along with a great radiation weapon known as Lorenzo's Artifact, which excels at killing humans. Start this quest by heading to Bunker Hill, pictured above. Upon one more more trips there, you should meet a man named Edward Deegan in the bar in the back. He'll give you a quest named 'Special Delivery'. If you have this, you're on your way to doing this chain already. Cabot House will be marked on your map. 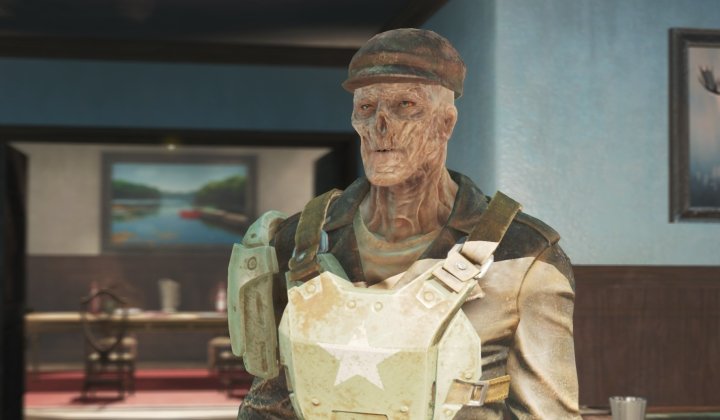 Edward Deegan is the man you want to meet. 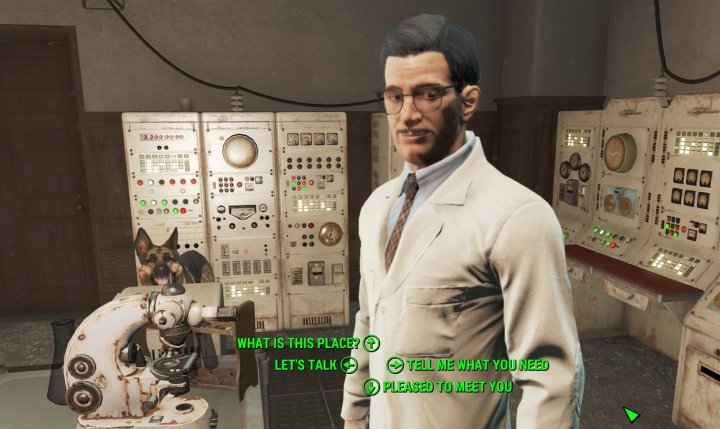 Venture to Cabot House (tell the person manning the intercom you're expected), where you'll meet Jack Cabot and listen to his interesting theories. You'll be instructed to travel to Parsons State Insane Asylum and meet up with the head of the guards there, in order to help locate a missing package. Before you leave, head to the upstairs bedrooms where you can find a Massachusetts Surgical Journal lying on a dresser. 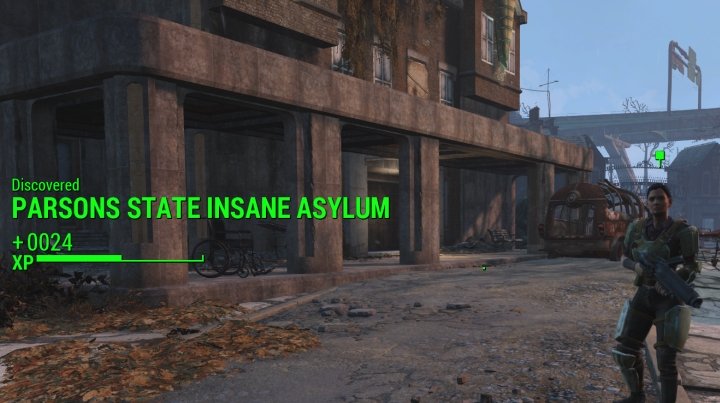 The Bobblehead we want is inside this Asylum, but we can't get to it until the final stage of this quest. Meet up with the guard Captain, Maria. She'll tell you they know where the package Cabot wants is - of course it's being held by some Raiders.

I only encountered a couple of Raiders here - very simple.

Take out the few Raiders at the Parsons Creamery, then it's off to Cabot House to continue the chain. Give Deegan the Serum and he'll throw in some extra caps as a reward - you can of course lie, but 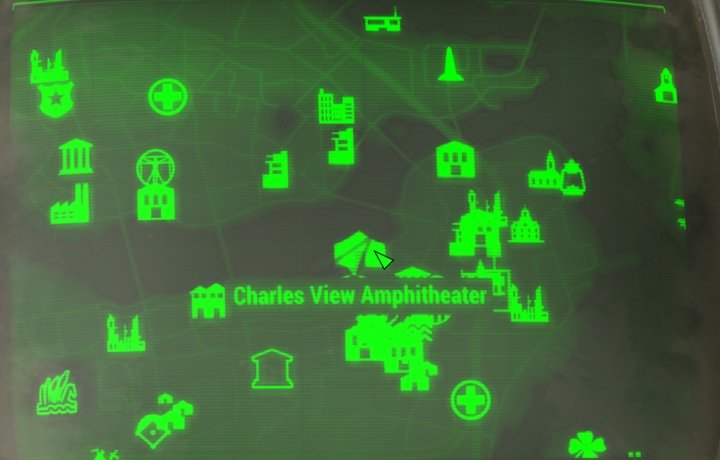 Charles View Amphitheater is just Southwest of Cabot House. If you'd like to learn a bit more, first head to Goodneighbor.

You can optionally go to Goodneighbor and The Third Rail there to ask around about Emogene, or you can go directly to Charles View Amphitheater, mapped above. It's not far from Cabot House and skips a step. 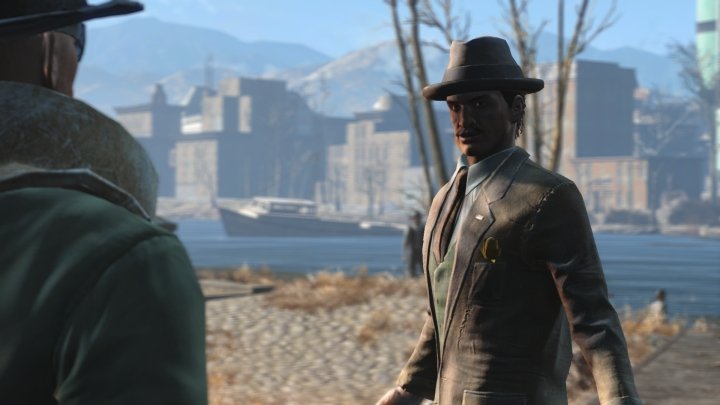 Brother Thomas of Pillars of the Community. Swell guy.

You probably won't want to give Brother Thomas - the man you seek - all your possessions. Handle him how you will, but at least seem interested so he takes you to his office. If you pass a speech check, you can threaten him out of this nonsense. For people who wonder, there is no point to joining - he just tells you to get out of his office after taking your gear and leaving you naked, forcing you to kill him bare handed. Emogene is locked in the back room of his office, so you don't have much choice.

Get the key off his corpse or pick the door for XP, then talk to Emogene. Might as well loot the Amphitheater before you head back to Cabot House. There's a mini-nuke in the main area of the amphitheater as well as some other valuables.

At the Cabot House, you can learn a bit more about the Serum and the family. You'll get a quest to head back to the Parsons State Insane Asylum.

The Secret of Cabot House 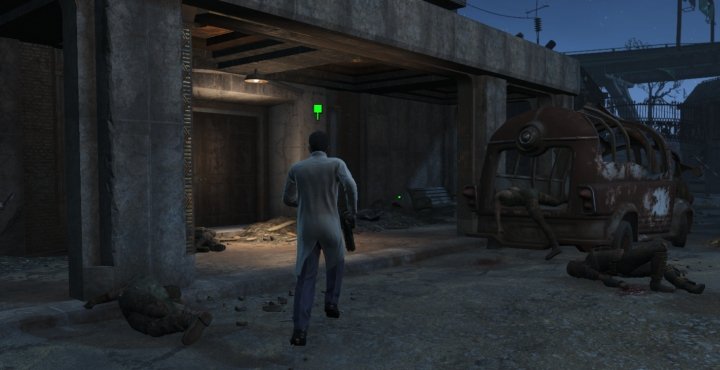 Return to the Asylum. Come here prepared for a fight, though not one as bad as it's made out to be - they're just Raiders, after all. The most important loot here are a few samples of the Serum, which you can take for yourself, along with the Charisma Bobblehead in Jack's office. When you get to the end, find a Massachusetts Surgical Journal in Lorenzo Cabot's Cell. A Syringer can be found if you search it thoroughly, and I found a Raider with a Deathclaw Gauntlet (melee weapon). 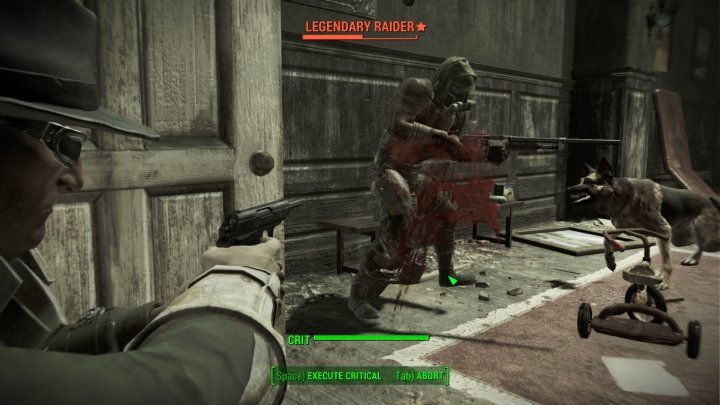 Generally easy raiders, you may bump into a few that are Legendary - they were still quick kills.

Cabot will lead the way, but don't let him rush you. He'll wait if you lag behind, and there's no timer. There are some side rooms that have some supplies you might need, along with a few locks to pick. Cabot handles himself pretty well, I have to say. 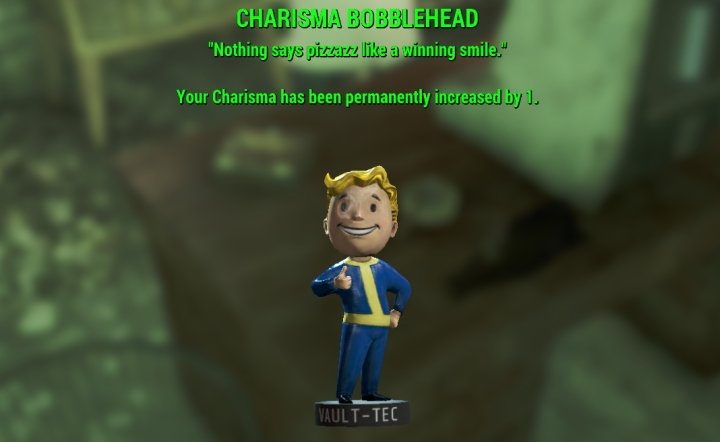 This Quest is the only way to get to the desk where you find the Charisma Bobblehead. Enjoy your improved speech checks and prices.

Once in Cabot's office, grab the Charisma Bobblehead. Outside this office in a filing cabinet you can find a Cell Key that may come in handy for you later. 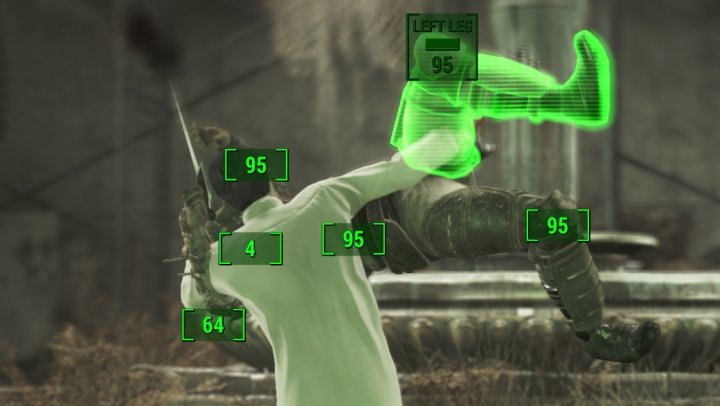 WTF, a body slam!? Age has its Perks

Anyway, once the room full of Raiders is cleared, you'll go to an unused wing of the Asylum and be on your way to Lorenzo. 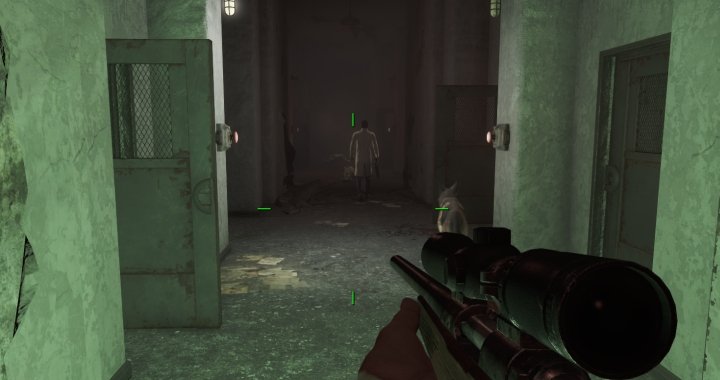 Find the Syringer Rifle in the last room on the left. Check others for medicine or drugs that may be of use.

When you reach this hall, enter the last room on the left (Jack goes right) to find a Syringer Rifle, which you can craft ammo for at the Chemistry Station. Other rooms have loot as well, so search if you like. Fight through the halls, then finally board the elevator with Cabot. 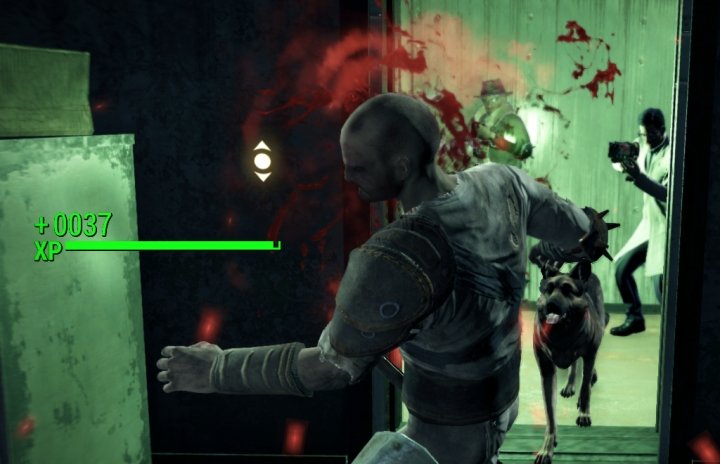 Of course there were more Raiders in the basement. This one didn't get a chance to turn around. I love this game.

You're instructed to kill every Raider you see (duh..) and finally meet Lorenzo, who's interesting to say the least. Honestly, you're going to have a hard decision on your hands now.

Should you Kill or Release Lorenzo? 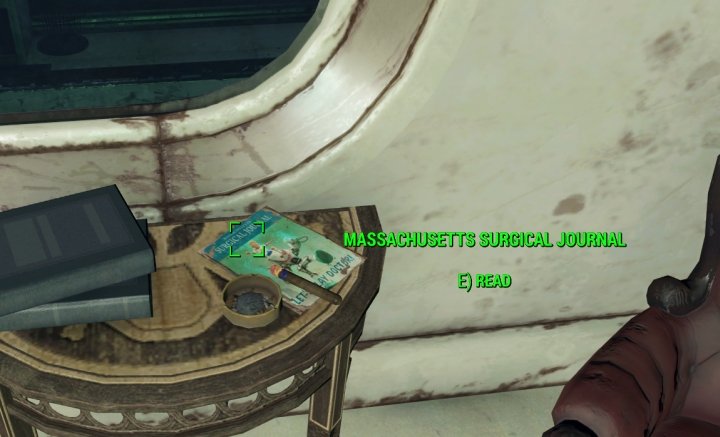 Get the Massachusetts Surgical Journal Inside Lorenzo's Chamber when you've chosen to free or kill Lorenzo Cabot based on the outcomes below.

There are numerous options and paths to completing this quest, but two main outcomes that benefit a player. Do note there are a few Serums to be found in the area around Lorenzo's cell:

Killing Lorenzo is probably the right thing to do, but if you roleplay an evil character you may want to free him!

Do as Cabot Says - Kill Lorenzo
Killing Lorenzo results in a 'proper' finish to this quest, I suppose. Once Jack instructs you to, flip all four of the switches in the room outside Lorenzo's chamber. He'll be killed, and you'll get to talk to Jack. Push the button to open the door first and strip the man naked while taking his pork and beans/medical journal - too bad you can't take the helmet. Anyway, be positive to Jack and get a better reward.

After a week in-game, you'll be given the Lorenzo's Artifact gun when you visit Jack (likely back at the Insane Aslyum) - a special modification to a gamma gun, which doesn't deal actual radiation damage in its usual form but rather knocks enemies back (its special modifier) while dealing direct damage. The weapon can be modified to deal radiation damage directly, but loses its huge knockback - so you made it a gamma gun. It does shine against humans (OK it's novelty, it works on humans), but is useless against most everything else. 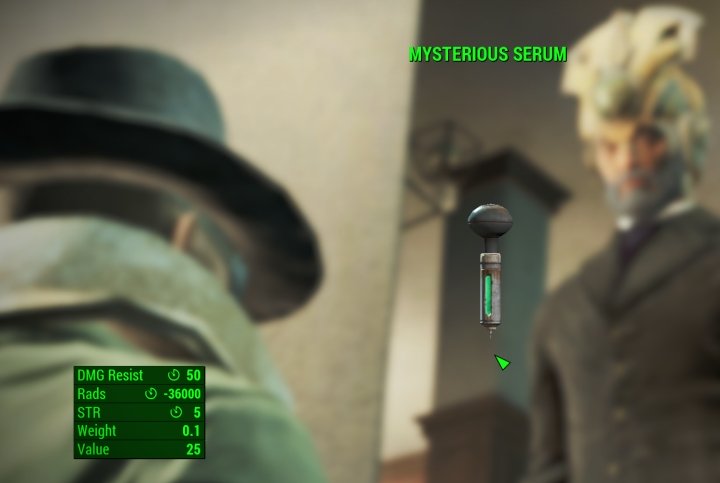 Freeing Lorenzo and siding with him, while killing the other Cabots will give you unlimited access to the Mysterious Serum.

Should you Betray Jack and Free Lorenzo Cabot?
Releasing and siding with Lorenzo will likely require you to kill the entire Cabot family, except Lorenzo. Talk to him after you push the button next to his cell, and ask about a reward. You won't get the gun, and will return to the manse to kill the family and spare Lorenzo. Maybe the Cabots have lived too long, but Lorenzo does seem the psychopath he is described to be.

Your reward for freeing Lorenzo is a lifetime supply of the Serum. Every time you run out, Lorenzo will provide another for you - one at a time. Annoying. What it does is heal radiation over time (like, an hour) while also boosting strength by 5. Players who are melee may be very interested in this option. Additionally, you can find a Zeta Gun on Jack Cabot's corpse - a crappy model of a normal Gamma Gun, which you can modify back to normal. So the true unique weapon here is Lorenzo's Artifact.

I took the first route (Kill Lorenzo) and actually later found a Zeta Gun sitting on Jack's table in the lab. Completionists may like this, and should check to see if it's available to them, as well.

John
So, if the mission is bugged, like the issue myself and others are having, then how do you ever get the bobblehead? I'm having the same issue of Emogene not being in the room at the amphitheater. I went to the amphitheater, had it out with the guy, picked the lock, and she's not there. It keeps showing her back at the Cabot House behind a locked door that can't be picked..so frustrating
Admin:
Sorry for the slow response. I only see a way to fix it on PC thanks to the console. Hopefully it's been fixed as of the 1.3 patch:  https://steamcommunity.com/app/377160/discussions/0/496881136901313050/