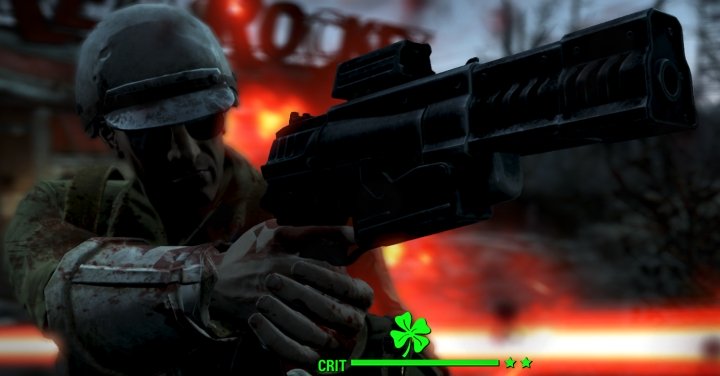 The Four Leaf Clover Perk (Luck) gives you an instantly filled Critical Meter at times, and synergizes well with Critical Banker where it will occasionally spill over into the next banked crit. 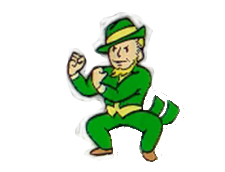 Gameplay Effects & Utility: The Four Leaf Clover Perk offers a chance that your Critical Hit meter will get instantly filled based on any attack that hits in V.A.T.S. - while I know this is a great perk when combined with Critical Banker, because it lets you overfill the gauge should you score one of these lucky strikes, I did not know if luck itself factored into it or not. So, in order to determine that I had to set up some testing using Fallout 4's Command Console. I learned some things about the critical gauge during this testing that I'll share here.

My hypothesis was that the chance of four leaf clover going off was based on each hit regardless of weapon speed and luck-independent. In order to prove this, I did a few tests. My character has 12 luck and it takes roughly 4.2 shots to fill the critical hit bar to full each time. Here are the Perk IDs and ranks for Four Leaf Clover:

Notice: Despite all the testing I did below, the amounts you get for each level have been revealed and I've added them to the table above. Your weapon's speed has nothing to do with the chance - it is a flat amount per level. It will trigger more often with faster weapons simply because you can use them more often. Regardless of the time I spent doing this, I'm glad to see I was not far off. This is a great Perk.

On test one, I loaded up 50 Supermutant Skirmishers via cheats. The weapon used was a 10mm pistol (advanced) that took on average 6 shots to kill them with torso shots, with a 69 fire rate on the weapon. This meant I fired a total of 300 shots. I had to use a critical hit every time four leaf went off, or the crit meter was full. I got exactly 34 four leaf clovers out of these 300 shots - meaning it had an 11.33% chance to go off. Obviously, that could be a bit skewed up or down and I'm no statistician.

My three Four Leaf Clover mechanics tests involved 50 Supermutant Skirmishers each, in order to teach me how this Perk works - they came without armor due to the Command Console cheats' nature, but it made the amount of hits for a kill predictable.

Next, to see if a slower weapon would trigger the effect more often due to higher AP consumption, I brought out my sniper rifle with a fire rate of 3. It took around 3 shots to kill each Supermutant. I again loaded 50 of them, and in around 150 shots landing saw it go off about 15 times - 15/150 is 10% - so quite close to what I'd seen with my 10mm.

I tried it again, with the sniper rifle, but this time doubled my luck to 24. I did not notice For Leaf Clover working more often with 24 luck, but did note it now only took just over 3 shots to fill my critical hit bar. This is the main benefit of more luck, particularly with banker since any overflow will go toward the next crit. So, more luck will not make it work more often - or at least I couldn't prove so. I admit my process was not perfect, but this should give you some idea of the effectiveness of the Perk. It's a lucky occurrence that can sometimes turn the tide of battle and that's what a luck-heavy build is all about. Only twice during the entire testing did I note Four Leaf Clover had triggered during a critical hit, or at least mistook it for happening.

There is balance here, however, despite the faster weapon allowing you to trigger Four Leaf Clover more often and getting the same critical meter fill - big, heavy weapons deal larger critical hit damage! Each weapon has its own hidden crit damage multiplier - a 10mm only does 50-100% damage, but a sniper rifle does triple. We all know head shots deal even more damage than torso shots, on most creatures, so this is the best use of your critical hits in normal situations. With a big powerful weapon you don't necessarily need to also have the Better Criticals Perk, but for a fast light weapon you should absolutely take this with the Critical Banker and Four Leaf Clover Perks, so that your random luckiness can dish more damage out of your light weapon. Special weapons with better crit damage will also allow you to better take advantage of this awesome Perk.

Good luck out there, and I can be reached at [email protected] for feedback.

Booyaah
Correct me if I'm wrong, but I'm pretty sure the main advantage of stacking crit is not only for the added damage, but also the consistent damage, from what I am told crits always land with 100% accuracy.

0
Will
I'm curious if automatic weapons, that shoot a burst for every "shot" in VATs, will register each bullet of that burst as a chance to proc the Four Leaf Clover perk.Basically, a gunslinger pistol gets one bullet per shot, or ~10% for four leaf clover. Would an autopistol that shoots 3 bullets for each shot have that ~10% chance register 3 separate times for each "click" in VATs? Could you autopistol string and also bank crits constantly with high luck? I'm going to go home tonight and test..