Fallout 4's Ricochet Perk affords that you're so lucky enemies' shots bounce right off you sometimes and kill them. How useful is this Perk in reality? Let's have a look by getting details on how often it goes off in combat and whether it's worth it or not. 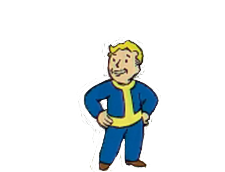 Gameplay Effects & Utility
The thing to note about Ricochet is that it only triggers if an enemy is at less than 40% health or has 100 HP. Whichever criteria it fulfills. So, as you go further into the game enemies will need to be weakened first. Still, you will encounter lower-level enemies who will often die from this Perk and allow you to focus on the tougher opponents. Because weak enemies can still deal damage to you, it's nice to have them eliminated regardless of the fact that it's not going to insta-kill a strong legendary gunner before you deal damage to him.

The effects are different for automatic and regular weapons. Automatic weapons only proc 1% of the time at rank 1, while semi-automatic weapons will trigger it 5% of the time. This is appropriate, given Raiders and Gunners who fire auto-weapons are going to shoot so much more often and thus risk this Perk going off way more often were the rate flat. Plus auto weapons deal less damage to you, period. So the amounts are not huge, but you WILL see the effect. During testing I saw a few enemies just drop dead when attacking me, and in a big firefight it's going to go off more often. You may even weaken enemies to make this work more often.

Rank 2 makes it a bit better - 2% for automatics, doubling the likelihood, while semi-auto goes to 7%. You're going to get hit with automatics way more often later in the game so this is a good thing. An enemy with a minigun greatly risk this, and you may even be interrupted by your own Perk while working an enemy's life down. All the better, because you can move on to the next target.

Rank 3 of Ricochet doesn't add any extra rate for actual Ricochets, it just gives you the 25% chance of an instantly full Critical Meter. It means that if you do not have Critical Banker, you should be using Crits regularly so that the benefit of this rank isn't wasted. If you DO have Critical Banker, four leaf clover, etc. you are going to be a powerhouse in combat, especially with other Perks that benefit you in V.A.T.S.. If you go all the way to 10 Luck and get this, you won't regret it. Be sure to go after weapons that have good Critical damage and consider modding them to boost it. Find the Bobblehead for your favorite weapon type, as they all raise critical damage 25%.

Jesse
I got 2 Ranks of Ricochet at level 30. i was very excited about it.Around level 35ish I discovered this website. It's a very good website!I was disappointed to discover that it doesn't have a chance to process on full health, legendary enemies. That was my highest hope, regarding this perk.I am now level 41 (nearly 42) and, in the Combat Stats, it shows proccing only once. I very much noticed it when it happened; I all but leaped for joy. I was a fresh level 40 when it occurred.Unfortunately, it was a low health, damaged, weaker raider.Double unfortunately, I was hoping to fill my critical meter on the raider before the next skirmish. Ricochet killed the raider prematurely and denied me a potential 4 Leaf Clover process.On the other hand, I am looking forward to level 50 for rank 3 of Ricochet. That way, there's a chance that I get a critical in my bank.