Finding Ammo in Containers and Corpses

Don't let the description fool you. Scrounger affects containers of all kinds - slain enemies are 'containers'. This is incredibly helpful on high difficulty settings like Very Hard or Survival, but less necessary on easy to normal.

The Scrounger Perk states that players will find more ammo in containers, so I did some testing to learn just how this Perk works and whether certain types of objects count for its bonuses. Here's a rundown of the Perk ranks (with Perk IDs for cheaters) and my findings while testing the Perk's effects: 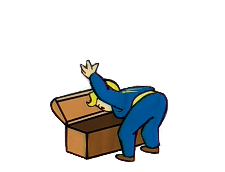 Gameplay Effects & Utility: This Perk doesn't always proc, but over large samples of containers will give you larger stacks of ammo you would've already found, or ammo that an enemy didn't even need to have on them - say, shotgun shells on a raider using a .38 caliber weapon. The effect is extremely noticeable at higher ranks.

Out of curiosity, I wondered if corpses counted as containers for the purposes of this Perk. They DO, and you'll find way more ammo than usual from even melee enemies. I tested this by repeatedly loading 30 regular Supermutants with god mode and slaughtering them. Overall, I'd say that I got double the ammo by using the 4th rank.

Even 1-2 points in this Perk will help with harder difficulties such as Survival, where you must expend more ammunition to kill enemies. Put weapon specialization first, and this second and you won't have as many ammo problems. It'll take some of the ammo conservation factors down a notch, by providing more from your kills and more from random desks/file cabinets and ammo crates themselves. It's worth noting that this doesn't seem to work with enemies like mongrel dogs who would not have ammo on them, but rather anything humanoid or otherwise that has a reason to have ammo.

Every ranged build will benefit from this, just because you're more likely to find the type of ammo you use and can sell the type you don't.