How it Works and Why it's a Good Perk

Fallout 4's Perception Rank 9 allows you to unlock the Penetrator Perk, one which offers great promise in making enemy cover ineffective. This guide explains the Perk's mechanics and how you can make good use of it to snipe your enemies. Please note this does only apply to V.A.T.S. - you can't shoot through walls with this Perk without being in that mode. Also, an enemy 100% behind cover will still be untargetable in V.A.T.S., as they should be. There are only 2 Ranks to this Perk: 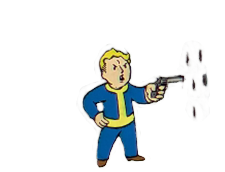 Penetrator Gameplay Effects & Utility
Penetrator is incredibly useful to any build except melee. For snipers, it's top notch. However, in its current state, you must have realistic expectations of what the Perk can do. First of all, what counts as cover? Sometimes, an enemy's body is blocking one of their own bodyparts - such as a Deathclaw's stomach when it's charging at you, or when trying to weaken a Supermutant Suicider's right hand while you're on his left side - his body reduces your accuracy when trying to detonate that mini-nuke. These are things your weapons can always penetrate, so long as your accuracy in V.A.T.S. is solid.

Naturally, there is also typical cover - a fence or wooden wall. Penetrator can go through one layer of this.

The first rank will make it so that it's as if the cover is roughly half what it really is, and depending on your range can get you to a very high percentage chance to hit despite there being a 'penalty', so it's reducing effective range but giving you a chance to hit. Rank 2 of Penetrator removes this penalty altogether, as though the cover isn't there.

I decided to do a few tests with the Perk to show examples without the perk, with rank 1 and with rank 2. They're not great, because I have an accurate weapon and the target was medium range. However, Mirelurks are good case studies because their shell counts as 'cover' as you can see:

Without the Perk, I can only hit the shell of this Mirelurk. 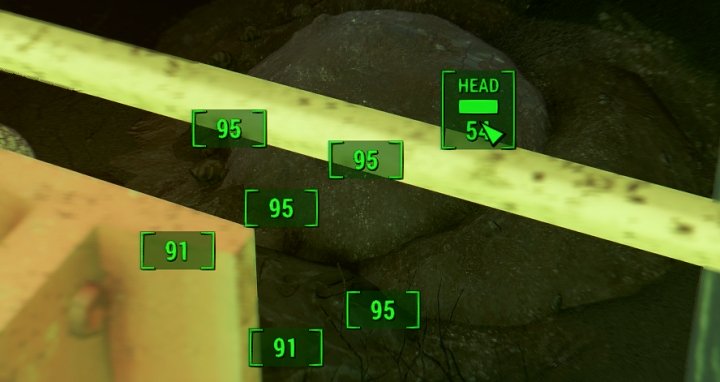 I can now hit the limbs, but the penalty is clear - the Mirelurk is close enough these should be 95%, but it's no longer 0. My test is a little flawed in this shot - don't think the last rank only gives you 4%. This Mirelurk is very close, so even with the penalty I can hit it.

Penetrator Rank 2 allows me to shoot completely through the enemy, hitting any limb I desire.

Now, there ARE sitautions where it won't work. Certain objects just won't let you penetrate them, but my body blocking a body-part example should never fulfill this scenario. If you try to shoot a Mirelurk from behind, with only its shell (and innards) blocking its head, it'll go straight through and hit the head. It's super effective in that situation. 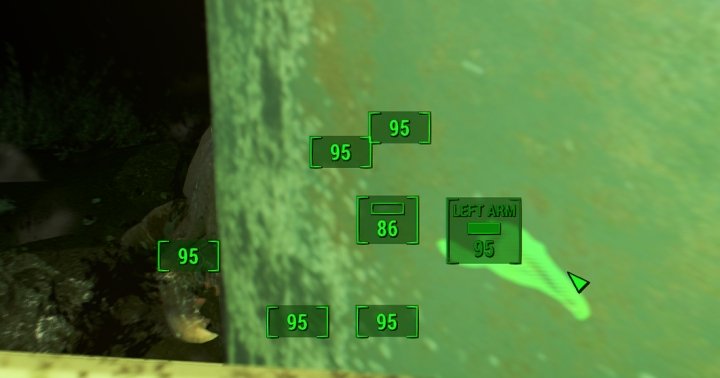 In this case, penetrator won't work - the limb I'm aiming for is completely behind steel, and bullets cannot pass through structures in Fallout 4.

For an example where it won't work, in trying to shoot through a solid steel reservoir inside a brewery, it simply wouldn't penetrate. Same thing for a supermutant behind two layers of fence, although all of his limbs had the same hit chance. If the 'hit box' is behind multiple solid objects, don't expect it to work - this can apply even if they're only partially covered. In fact, this Perk may cause you to make mistakes because it will indicate they CAN be hit, when in fact they can't be hit. It seems to only penetrate one layer of cover, period.

Testing this, I made sure only one layer was between myself and the target, after having thought this perk completely broken. You can see the leg is cleanly behind cover..

Note the red flash on the wall. The bullet is penetrating and the Supermutant is being hit.

Now, some report good success with armor penetrating weapons (and those are good anyway), but i think it's bunk. I think the reason some people don't see this working is the 'layers' factor. It'll penetrate one, but not two layers of cover in my testing. I've ruled out armor penetrating mattering at all by testing this a lot. It works with laser weapons just fine. 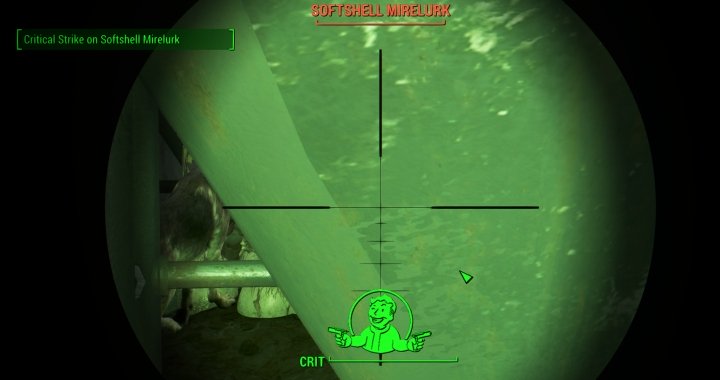 Crits always hit so long as the chance is greater than 1%, so your magic bullets can go straight through structures, in these cases alone. Without this Perk, the chance would be 0 so you couldn't pull this off.

As for a Critical hit - they always hit so long as the % chance isn't 0 according to V.A.T.S., so therefore you can penetrate any number of layers in this case, and it can be incredibly useful. Just pay attention to whether multiple layers of steel or wood is blocking your shot and your relationship with the Penetrator Perk will be a good one! If the criticals being able to pass through multiple layers of cover is a 'bug' I hope they don't fix it, because shooting through to score a critical should be a thing.

It's a Great Perk
Though this isn't as reliable as the Perk description lets on, it's still an amazing Perk that will come in handy for all forms of gunplay, particularly when you are attempting to cripple an enemy's limb or just hit them when they're hiding behind a simple cover. If half a head is visible, you'll shoot as though the full head is visible, greatly enhancing accuracy.

Overall I love this perk and recommend it, it just takes some trial and error to use perfectly. If Bethesda changes it, or you think I've missed something about it, email [email protected]