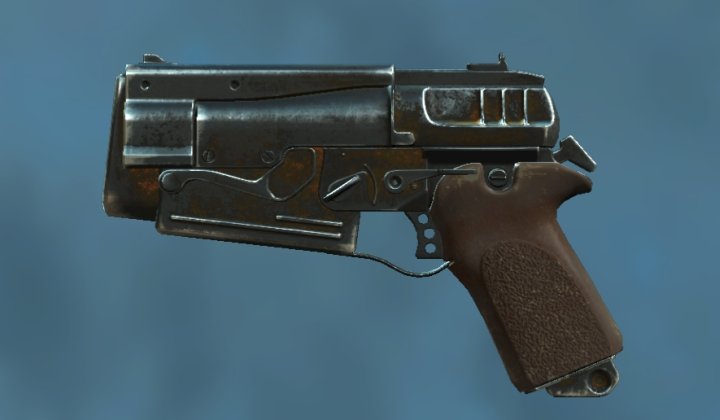 A 10mm Pistol in Fallout 4 with Standard Weapon Mods

10mm Pistols in Fallout 4 are upgrades to the Pipe Pistol and better in every way save one - ammo scarcity. It will be a while before you're regularly running into enemies that carry these rounds as opposed to .38 caliber. Therefore, until you've got a surplus you're better off saving the 10mm for tougher situations. Later it becomes a staple weapon and is great for taking out weak enemies like ghouls without using up more rare/powerful ammunition. Here is the 10mm's base stats (without any weapon mods), followed by what you can expect out of various modifications to the 10mm handgun:

The following are general advice on how the stats are modified on a base 10mm weapon using data you see with Better Weapon Mod Descriptions Fallout 4 Mod by Takaru Minari installed. This should be helpful to players who do not like using mods or are playing on Xbox or PS4 and do not have access to them.

I originally planned tables for all weapons, but it's a daunting task. I've instead elected to give general info on certain types of parts and how they affect hidden things like VATS cost, critical damage, and recoil. Many of the best weapon upgrades require you to have at least a couple ranks of Gun Nut, and some require Science.

Light Receivers lower VATS AP Cost by 25%, while heavy raises this by the same amount. Hair trigger only affects VATS by 10%, but brings up the fire rate by 50% and may be used to better fire the weapon manually. Many receivers that simply say better damage do only that, so will not affect your VATS in any way. Calibrated receivers add 1x to the final critical hit modifier. For the best semi-automatic 10mm consider based on your Luck, because with high luck (mainly) and decent AP the Calibrated Powerful Receiver's increase in crit damage may outclass the Advanced Receiver.

Transforming a 10mm into an automatic will raise its fire rate by 175% while bringing up AP cost by 25%. Armor Piercing auto receivers can be more effective later as they will get through 40% of an opponent's armor.

Long Light Barrels of either kind will give you the same AP Cost while dramatically increasing the effective range of the weapon, so it's not the same as with Combat Rifles. Longer barrels also increase accuracy for VATS purposes, so this is a win/win. The ported barrel will slightly increase (5%) AP Cost while reducing recoil 25%, but the clear winner is the Long Light Ported Barrel which gives all of the aforementioned bonuses.

While the comfort grip is nearly the same as standard albeit with a minor (5%) increase in spread and recoil factors, the Sharpshooter's Grip gives you a minor reduction in AP cost and 15% of both recoil/spread and is the obvious best choice.

The standard magazine offers a clip size of 12 as noted above and reloads faster than the large magazine, which incurs a +10% AP Cost penalty. The Quick Eject magazine gives the same (12) capacity, along with a -30% Reload Time and -5% VATS Cost. Large Quick Eject does not affect AP Cost but does double the capacity to 24 and gives a 20% faster reload time over the normal 10mm mag.

Any of the sights are better than standard, reducing sight time and AP Cost in VATS. Glow sights are 7.5% while either type of Reflex Sight is good for 15% reduction in AP Cost. Choose based on your own personal preference for firing the weapon manually when sighted. Recon scopes can be added to the 10mm, increasing its accuracy by about 15% but giving a whopping 40% increase in VATS Cost. These also track targets, putting a diamond over their heads.

Compensators reduce range a bit (-9) but make firing the weapon manually much easier - it reduces horizontal recoil by 100% which will keep you on target when the weapon goes back 'down'. Vertical recoil is reduced 15%. Muzzle Brakes further reduce range but offer a flat 20% recoil reduction (no mention of horizontal recoil). Suppressors reduce the sound the weapon makes for stealthy players, greatly reducing detection - with that comes the worst reduction in range of the bunch but a hefty 25% bonus to recoil, allowing you to fire quickly when on target.