A Gauss Rifle in Fallout 4

The Gauss Rifle is a special type of weapon in Fallout 4. In order to deliver its full damage, the fire button must be held down and the weapon charged. Gauss Rifle damage is affected by normal damage resistance - it's ballistic as it's accelerating a bullet magnetically to increase its velocity beyond that of a normal rifle. Here are the base stats of a Gauss Rifle when fully charged. Further below, we'll discuss how you can get one of these for your own, and how it very well may be the best Rifle in Fallout 4.

So, the Gauss Rifle has a very long range, high damage, a deceptive fire rate (as you'd want to charge it or else waste ammunition), and unfortunately low accuracy. Given the way accuracy works in Fallout 4, further shots may miss the mark even if you're spot on - therefore, increasing its accuracy is something most players should do. The Gauss Rifle's damage is one of the highest in Fallout 4, and a two-shot variant would be one of the best to find, though a few other mods are desirable as well, such as VATS-enhanced, Violent, Lucky, Instigating (if without a companion who may break the Legendary bonus) and Penetrating (especially in combination with the Rifleman Perk). Finding one of these would be rare, and definitely worth keeping.

VATS and Gauss Rifles
Something I wondered myself is if the Gauss Rifle deals its full damage in VATS, given the need to charge it before firing. The answer is yes - you'll deal damage as though you'd held the button down the whole time. This makes it a wonderful weapon for a Sniper/VATS build.

Where to Find Gauss Rifles 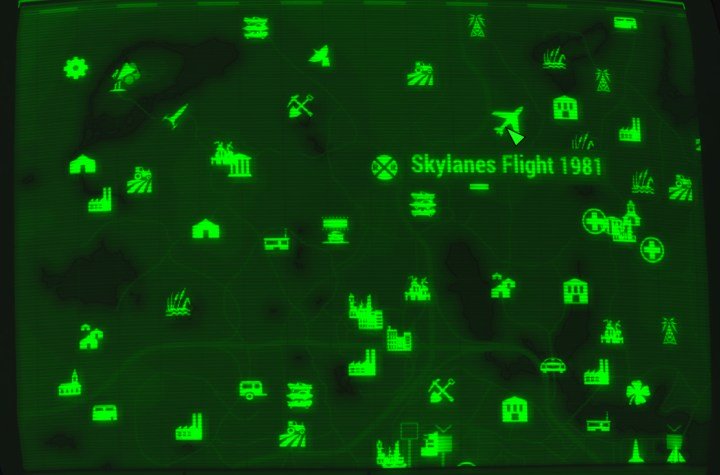 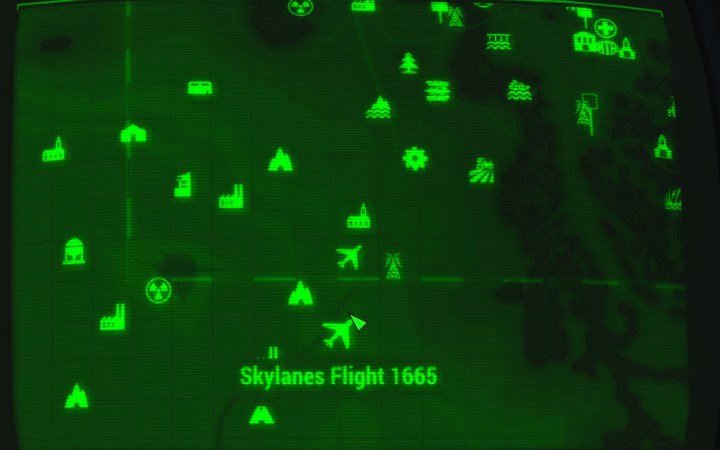 These locations require you to have master-level Lockpicking. It may be best to wait until vendors sell them, because it's around the same time you can find them in these crashed planes. The first is in north-central Commonwealth, the second is in the Glowing Sea (bring Power Armor or a Hazmat Suit)

Gauss Rifles, like many things in Fallout 4, are leveled weapons. This means that you must be in the late 30s in order to find one sold at a shop. Similarly, places that may reliably have one are going to give you a lesser weapon is you go there too early. There are a couple of reliable places to get Gauss Rifles:

Below we will look at some of the best weapons mods for a Gauss Rifle. You can expect the best to take high levels of Gun Nut and at least a few points in the Science Perk.

The following are general advice on how the stats are modified on a base Gauss Rifle using data you see with the Better Weapon Mod Descriptions Fallout 4 Mod by Takaru Minari installed. This should be helpful to players who do not like using mods or are playing on Xbox or PS4 and do not have access to them.

I originally planned tables for all weapons, but it's a daunting task. I've instead elected to give general info on certain types of parts and how they affect hidden things like VATS cost, critical damage, and recoil. Many of the best weapon upgrades require you to have at least a couple ranks of Gun Nut, and some require Science. I have a page on finding crafting materials, as well as adhesive should you need help with that.

Two upgrades exist here. They take R3 Gun Nut/R2 Science and R4 Gun Nut/R3 Science, respectively. The first - Full Capacitors - adds 25% damage and a small increase in VATS cost (probably bringing it to about 44), makes the ammo capacity 10, with the only drawbacks being heavier weight (thus longer time to pull the weapon out) and slightly slower time to sight it.

The next, Capacitor Boosting Coil, doubles the capacity to 20, with a +50% damage boost and the same stats.

If you truly want to maximize the damage of a Gauss Rifle, you're either going to need those two Perks leveled or else get lucky finding a Gauss Rifle that already has it (likely from a very high level enemy). Put the standard (half-capacitor) mod on the newly-found Gauss to put the mod in your inventory, and swapping in the upgraded capacitor (since you have it and don't need to craft it). This is mainly for people who only have Gun Nut and not Science, as anyone else would just mod the newly-found Gauss Rifle unless they have a legendary.

There is one option for an upgrade - the Gauss Rifle Shielded Barrel. You're adding 25% damage to an already powerful weapon, with no additional VATS AP Cost and increased range. The only drawback is that it takes Gun Nut Rank 3. This is highly recommended.

The Recoil Compensating Stock (Rank 4 Gun Nut) is the only available mod in this category and adds 10% accuracy to the weapon, which will help with long-range shots.

The Gauss Rifle, like all others, can be fitted with a scope or regular sights. At the very least, putting some improved normal sight on it is recommended as it will raise the accuracy. The best option here is the Gauss Reflex Sight, which takes Rank 3 Gun Nut and Rank 1 Science. It will reduce AP Cost by 15%. This is what I recommend for people who rarely snipe manually, though if you find yourself needing to will regret the lack of a scope for those long-range shots.

Scopes on Gauss Rifles increase AP Cost while greatly increasing accuracy. You can get it to 101 via a Long Scope without any other mods, which is quite good - and even better with the Recoil Compensating Stock. Long Scopes are all a matter of taste - either you get normal, night vision, or tracking scopes which will put dots over enemies' heads

If you've got Rank 3 Gun Nut and Rank 1 Science, Gauss Rifles can be fitted with Compensators to reduce recoil by 50%, which actually increases accuracy by 12 at the expense of maximum range (about 5% drop). It is actually recommended because it will even out the weapon a bit and make you more likely to hit both in VATS and while manually sniping.

With Rank 4 GN/R2 Science, Gauss Rifles can be outfitted with a Suppressor which works astonishingly well with the Mister Sandman Perk (which increases sneak attack damage with suppressed weapons) and Ninja (sneak attack damage multiplier increase). Since the Gauss Rifle makes an amazing Sniper Rifle, this is probably the best weapon possible for that build, especially if you can get a good Legendary variant (two-shot!). 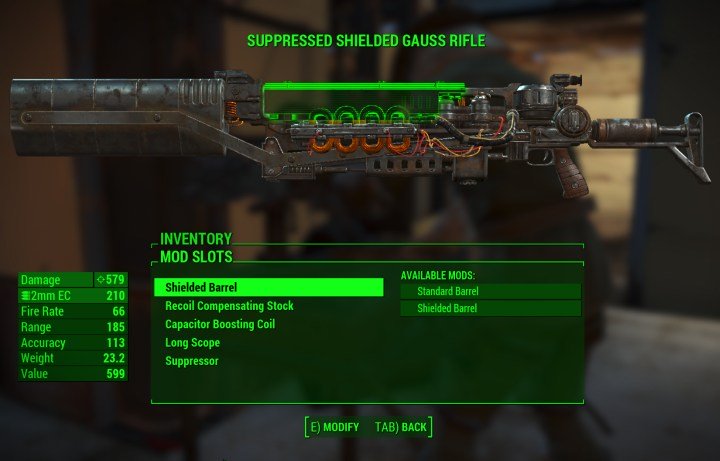 A non-Legendary Gauss Rifle fully modded. A two-shot or Violent rifle could show extra damage. You can go even further with the Bloody Mess Perk.

I won't do this on many of Fallout 4's weapons because there is much more variance in the weapon's mod options. Since Gauss Rifles offer rather limited options, I thought it'd be fun to show off what a maximized Gauss Rifle can do. You can actually make a build around this one gun!

Sneak attacks with this Gauss Rifle would deal a whopping 5.3x damage over the weapon's base of 579 - that comes out to 3,069 damage before armor is applied, and thankfully Rifleman allows for some Armor Penetration. Critical Hits with Better Criticals could do substantially less, because of the lack of a weapon mod for Gauss Rifles that increases Crit damage. The two do not stack (there's no critical sneak attack, just a critical + sneak attack damage as you can see in my Guide to Critical Hits), but you could easily deliver damage in excess of 4,000 damage even without a Two-Shot Gauss Rifle. Read more about Perks for a good sniper build in my Sniper Build Guide.

Jack
Please stop endorsing two shot, especially on a sniper rifle. It increases base damage that doesn't get affected by upgrades(well, damage upgrades at least) it also makes long range headshots much more likely to miss. Two shot is great on an automatic weapon like a submachine gun or assault rifle but for high damage weapons it is significantly less effective than Lucky or Instigating.

26
Jetroid
I'm not sure why Jack is getting so many downvotes here. He makes a very good point. Two Shot on a precision weapon is trash. You really want Instigating so that the initial hit is amazing. It's especially useful for Legendary enemies, as you can knock then right back down after they 'mutate'.