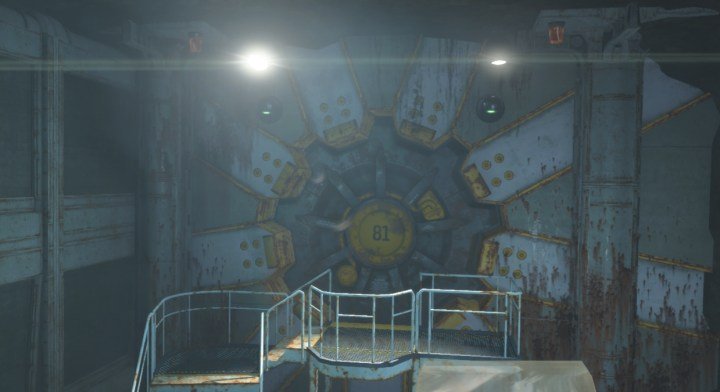 Vault 81 is a great place for a mid-level Sole Survivor to travel, due to its various benefits

Taking a small trip to Vault 81 can lead to a few quests, the Medicine Bobblehead, a new companion, as well as the ability to purchase one of the best weapons in Fallout 4 - Overseer's Guardian. This Vault is not too far out of the way, and is well worth the journey given all that it has to offer. Just unlocking new places to sell loot can be worth it for some characters.

Vault 81 Location & Getting In 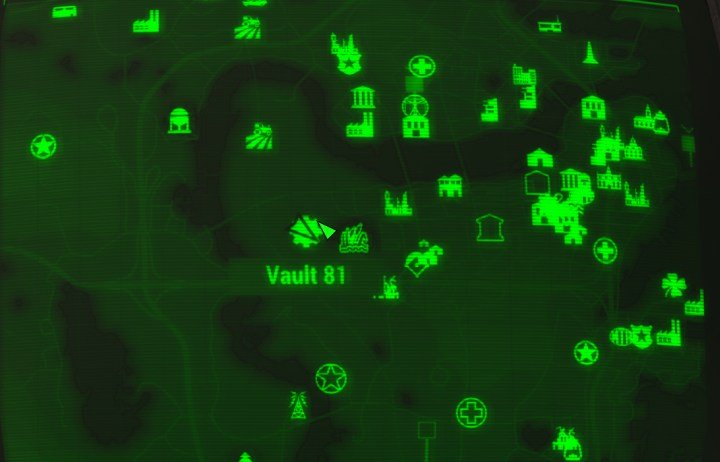 Vault 81 is located here, west of Diamond City. Note the river, as it makes this area of the map easier to locate.

Once you've reached this spot on the map, which is West of Diamond City, you'll be met with some resistance upon attempting to open the door to Vault 81 (use the control panel). The Overseer seeks 3 Fusion Cores, but you can get through if you pass a difficult speech check to 'Help a fellow vault dweller'. If you don't have the cores, you can come back later after collecting them, or else reload until you pass the speech check. Regardless of your choice in getting the door open, the Overseer will now meet you at the entrance along with security. 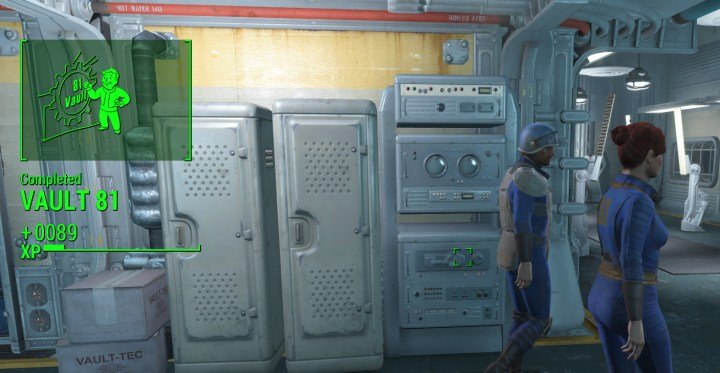 Completing the Vault 81 Quest gives you a little XP, but it leads to better things

Once inside and after talking to the Overseer, you'll complete the Vault 81 mini-quest. You should see a cat leaving as you head toward the back elevator. A little boy, Austin, will offer you a tour for a few caps. The place isn't large or complex, but you'll hear some good gossip about the Vault residents if you do take the tour. First, he'll show you the Depot. You can continue to follow him after this, and return to do some shopping unless you don't mind failing this mini-quest.

The Depot is the shop run by Alexis Combes, the shopkeeper who sells Overseer's Guardian as well as some other good gear. Notably the Overseer's armguards although they are quite pricey. If you complete the quest, "Hole in the Wall" she will give you a 10% discount so it may be worth it to you to do this first.

Here Kitty, Kitty is a simple fetch quest. Talk to the cat to send it home.

If you follow the tour, Austin will lead you down to the classroom, as well as to meet his best friend Erin. She's lost the cat you saw leaving the Vault. Don't ask her for money, because the best reward option is the default (a fusion core) - otherwise you're conning a kid into giving you toys, basically. Agreeing to find Ashes will lead to the Here, Kitty Kitty Quest and that minor reward.

Give Blood at the Clinic
Explore the Vault and you'll find the Clinic. Inside, Dr. Forsythe will want to get your blood for his research. This is an important requirement for the later quest you can take here, so do it! 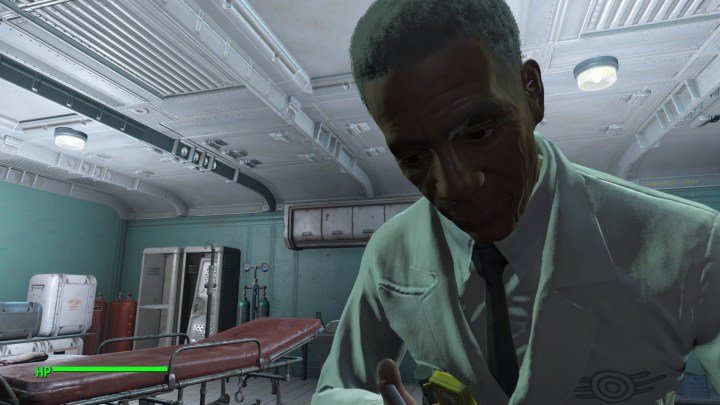 You must give blood to Dr. Forsythe to unlock the Hole in the Wall Quest

Unlock 'Hole in the Wall'
In order to get Curie and the Medicine Bobblehead you must unlock the Hole in the Wall Quest. For that to happen, some time must past (over 24 hours after your first visit) and you must first give blood to Dr. Forsythe. Later, on return to Vault 81 characters will have moved and a visit to the Clinic/Depot will begin the Hole in the Wall Quest, which will give you Curie as a companion, get a syringer and a room in the Vault, allow you to take items out of the Vault, and get a 10% discount at the Depot, but only so long as it has a favorable outcome (save the kid and take a minor hit to your HP, permanently unless you cheat). Do the Here, Kitty, Kitty Quest and some other adventures outside the vault and come back on a later date. You could also leave, wait a day or two and return without bothering with this fetch quest. 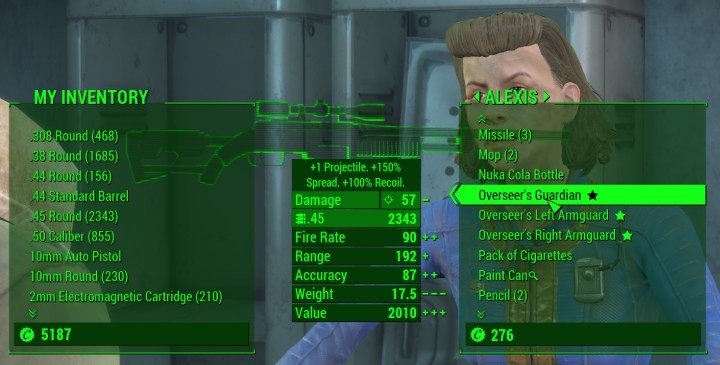 Buying Overseer's Guardian
With average Charisma, Overseer's Guardian will likely set you back around 2,000 caps. Wearing charisma gear can drop the price a tad, as well as alcohol and drugs that affect charisma/sell prices. As noted, finishing Hole in the Wall will get you a 10% discount at this store. The unique modifier on this weapon is not that special, though odds of finding one naturally are somewhat low. It's a combat rifle with the two-shot legendary modifier, which fires an additional projectile (effectively doubling the damage when you hit) while also increasing spread and recoil. This weapon when heavily modified can be one of the best-in-class as either an automatic or sniping weapon. I personally use it as a close-range weapon for my sniper build because I have points in Rifleman and have modified it to reduce the cost to fire in VATS as demonstrated on my Combat Rifle Page.

A Worthwhile Journey
So, a trip to Vault 81 is quite worth it and you'll not only unlock a companion, but also get a bobblehead and access to one of the better weapons in Fallout 4. Players who are using the Commando or Rifleman perks will enjoy Overseer's Guardian and can make great use of it, and the cost is very reasonable compared to some other unique weapons in the game.